Is unity the most important thing to Pope Francis? 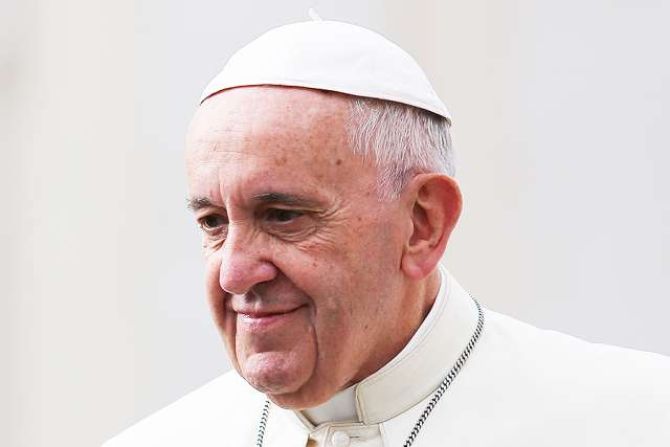 Pope Francis has decided to begin 2017 in much the same way as he did last year: praying for Christian unity.

And it's this drive for unity – not only among Christians but with other religions as well – that's emerged as sort-of personal manifesto from practically the moment he took office.

In his newest and first prayer video for the year, Pope Francis prayed for Christian unity, specifically "that all Christians may be faithful to the Lord's teaching by striving with prayer and fraternal charity to restore ecclesial communion and by collaborating to meet the challenges facing humanity."

Released Jan. 9, the video shows images of different churches and people working together in service projects as the Pope, in his native Spanish, notes how "many Christians from various churches work together to serve humanity in need, to defend human life and its dignity, to defend creation and to combat injustice."

As the screen changes to show different hands grabbing the same rope one at a time, Francis says the desire to walk together and collaborate "in service and in solidarity with the weakest and with those who suffer, is a source of joy for all of us."

He closes his video asking viewers to "join your voice to mine in praying for all who contribute through prayer and fraternal charity to restoring full ecclesial communion in service of the challenges facing humanity."

At the beginning of each year the Pope's prayer intentions for the next 12 months are released, showing topics he wants to draw attention to throughout the year. This year, Christian unity is setting the tone.

Similarly, last January Pope Francis kicked off 2016 with a monthly intention for interfaith dialogue, praying that "sincere dialogue among men and women of different faiths may produce fruits of peace and justice."

In his first-ever video on the monthly papal prayer intentions, Francis noted that "many think differently, feel differently, seeking God or meeting God in different ways."

"In this crowd, in this range of religions, there is only one certainty that we have for all: we are all children of God," he said, adding that this "should lead to a dialogue among religions. We should not stop praying for it and collaborating with those who think differently."

Almost monthly, the Pope made some sort of new gesture or held a landmark meeting. If we take a look at some of the major events from last year, we see that from the very beginning this emphasis on dialogue was in many ways a papal priority for the year.

In addition to praying for interfaith dialogue in January, Pope Francis made his first visit to Rome's synagogue that month, where he embraced Rome's Chief Rabbi, Riccardo Di Segni, and urged Jews and Christians to unite against war and violence.

A month later Pope Francis met with Russian Orthodox Patriarch Kirill Feb. 12 while on his way to Mexico, marking the first-ever meeting between a Pope and a Patriarch of Moscow.

The two signed a joint-declaration that focused at length on anti-Christian persecution, the threat of secularism to religious freedom and the Christian roots of Europe. While many, Greek Catholics in particular, weren't happy with how the document handled the Ukraine crisis, for others it was a decent start to a nuanced yet positive process.

In March Pope Francis put this desire for interfaith unity into action by washing the feet of 12 migrants during his Holy Thursday Mass at a refugee welcome center on the outskirts of Rome. The migrants belonged to different faiths, and included Muslims, Christians and one Hindu.

April marked not only the Pope's daytrip to the Greek island of Lesbos where he met with Orthodox Patriarch Bartholomew I of Constantinople and Orthodox Archbishop Ieronymos II of Athens and All Greece to draw attention to the migration crisis, but it was also the month Francis met with the head of the Society of Saint Pius X, Bishop Bernard Fellay.

After what has been a lengthy and at many times tumultuous process of dialogue between the SSPX and the Vatican to restore ties, recent steps have suggested a warming in relations.

Among these steps was Pope Francis' decision in September 2015 to allow SSPX priests to validly hear confessions during the Jubilee – a mandate he has indefinitely extended – as well as his decision that year to send a cardinal and three bishops to visit the seminaries of the SSPX in order to become better acquainted with the society, and to discuss doctrinal and theological topics in a less formal context.

These moves culminated in the Pope's meeting with Fellay in April 2016, during which "it was decided that the current exchanges would continue," a statement from the Vatican describing the meeting read.

While the canonical status of the society was not directly addressed, the Pope and Bishop Fellay determined "that these exchanges ought to continue without haste."

In May Pope Francis made what many viewed as a quantum leap in terms of Catholic-Muslim relations when he welcomed the rector of Egypt's prestigious al-Azhar University, Imam Ahmen al-Tayyeb, to the Vatican for a private audience.

Relations were strained under Benedict in 2011 with claims he had "interfered" in Egypt's affairs by condemning a bomb attack on a church, but they made a dramatic shift after Francis and Al-Tayyeb's meeting. Following their May 2016 encounter, it was announced in October that the university and the Vatican will officially resume dialogue toward the end of April 2017.

In June Pope Francis traveled Armenia for a trip largely made to commemorate the centenary of the Armenian Genocide and support the country's Christian majority. During his visit the Pope met with Karekin II, Supreme Patriarch and Catholicos of All Armenians, speaking to him of their brotherhood and placing a strong emphasis on unity.

At an ecumenical meeting with Armenian Orthodox leaders the day before his audience with the Patriarch, Francis prayed that they would "race toward our full communion" with determination.

As if the events of the first half of the year weren't enough, after popping over to Poland for WYD in July, Francis made a quick visit to Assisi at the beginning of August to celebrate the 800th anniversary of the dedication of the Portiuncula chapel, the site where the Franciscan order began.

During the visit he had a surprise meeting with Mohamed Abdel Qader, the Imam of Perugia and Umbria, who was present with the Pope at the 30th World Day of Prayer for Peace in Assisi a month later.

Convoked by St. John Paul II in 1986, the gathering brings together representatives of various other religions, both Christian and non-Christian. During the September encounter, Francis was joined by Patriarch Bartholomew, Anglican Archbishop of Canterbury Justin Welby, as well as Imam Ahmen al-Tayyeb.

At the end of September Pope Francis made his visit to the Caucasus nations of Georgia and Azerbaijan.

While in Georgia, which is a majority Orthodox nation where relations with Catholics have traditionally been tense, the Pope met with Catholicos and Patriarch of All Georgia Ilia II, saying unity is necessary and love for God and the Gospel must overcome "the misunderstandings of the past" and the problems of the present and future.

Despite obvious tensions felt during the visit, demonstrated by the visible presence of members of the Orthodox Church protesting the Pope's visit as well as the failure of the Orthodox delegation to show up at the only public Mass the Pope celebrated, Francis has on several occasions spoken highly of Ilia, calling him "a man of prayer."

In Azerbaijan, which marked the first time Francis has traveled to a majority Shi'ite Muslim nation, he praised the peaceful coexistence of Catholics, Muslims, Orthodox and Jews the country enjoys. Only 600-700 Catholics live in the country.

Then in October Pope Francis made his historic visit to Sweden for a joint commemoration of the 500th anniversary of the Reformation. The event also marks 50 years of ecumenical dialogue between the Catholic Church and the Lutheran World Federation.

During a large ecumenical encounter Pope Francis and Lutheran Bishop Munib Younan, president of the Lutheran World Federation, signed a joint statement together. In a separate event later that day, Francis stressed that "we remember this anniversary with a renewed spirit and in the recognition that Christian unity is a priority, because we realize that much more unites us than separates us."

Pope Francis gave an interview in November ahead of the close of the Jubilee of Mercy that focused heavily on the rapid progress ecumenical and interfaith relations seem to be making during his pontificate.

In the interview, Francis credited this pace to his predecessors, saying the "small and large steps" that have been taken during his tenure are not of his own doing, but are rather indicative of the path of dialogue outlined during the Second Vatican Council "which moves forward, intensifies."

"I have met the primates and those responsible, it's true," he said in the interview, "but my predecessors have also had their encounters."

While John Paul II was the first Pope to do make many of the signs Francis is known for now, such as visiting synagogues and mosques, Francis noted that "the measure in which we go forward the path seems to go faster."

So while it has always been fairly obvious that ecumenical and interfaith dialogue have had a front row seat in Francis' pontificate, taking a look back puts into perspective just how much of a priority it's been.

In addition to highlighting this priority, the Pope's prayer video this month is also a clear reflection of his preference to focus on shared areas of interest and collaboration in ecumenical and interfaith discussions, rather than points of theological division, as a means of providing both sides the common ground on which to move forward.

For Francis, while questions of theology and doctrine are important, working together to serve the poor and vulnerable is the privileged place where ecclesial unity is expressed, even if the theological wrinkles have yet to be ironed out.

And if his prayer intention this month is any indication, as we look ahead to 2017 we can anticipate that the type of events and encounters we saw in 2016 won't slow down, but will likely continue to gain steam.