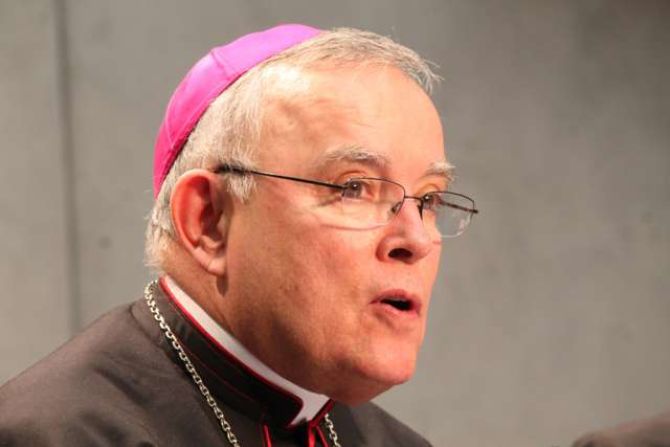 "The recent pledge by the Democratic National Committee chair to support only candidates who embrace the radical unrestricted abortion license is very disturbing. The Democratic Party platform already endorses abortion throughout the nine months of pregnancy, even forcing taxpayers to fund it; and now the DNC says that to be a Democrat--indeed to be an American--requires supporting that extreme agenda.

In the name of diversity and inclusion, pro-life and pro-'choice' Democrats, alike, should challenge their leadership to recant this intolerant position."


We mark two forgotten anniversaries in 2017.  Here's the first.

Exactly 50 years ago this Easter season, Pope Paul VI (now Blessed Paul VI) issued his great encyclical Populorum Progressio ("On the Development of Peoples").  The text focuses powerfully on global issues of social and economic justice and the need for rich nations to share generously with the poor.  It includes the line – worth remembering today – that we "cannot insist too much on the duty of giving foreigners a hospitable reception.  It is a duty imposed by human solidarity and by Christian charity" (67).

But Paul's idea of "development" was much larger than simply providing more and better material goods for the poor, vital though that task is.  As he makes clear in Populorum Progressio, there's no real progress without a right understanding of man's spiritual identity.  There's no real development without a respect for the wholehuman person as a creature of moral purpose.

Real development, for Paul VI, demands a reverence for human life from conception to natural death.  This is why he reminded the U.N. General Assembly (1965) that "Your task is to ensure that there is enough bread on the tables of mankind, and not . . . to diminish the number of guests at the banquet of life."  It's why he forcefully rejected abortion – echoing the words of the Second Vatican Council -- in his other great encyclical, Humanae Vitae, just a year after Populorum Progressio.

To put it another way:  There's something irrational, something deeply contradictory, in (admirably) arguing for the rights of our nation's foreign newcomers while (wrongly) allowing – and even sacralizing -- the systematic killing of a different kind of foreigner, the child in the womb, the newcomer to life itself.  Both the immigrant or refugee and the unborn child are human beings, both have inviolable dignity, and both demand our protection.  The difference today is, we don't recognize and applaud anyone's right to kill an immigrant.

As of mid-April though, that kind of logic is apparently absent from the national leadership of the Democratic Party.  The Huffington Post noted on April 21 that Democratic National Committee chairman Tom Perez "[has become] the first head of the party to demand ideological purity on abortion rights, promising . . . to support only Democratic candidates who back a woman's right to choose."

Which leads us to a second anniversary.

In 1992, exactly 25 years ago this July, Pennsylvania's Governor Bob Casey, a prolife Democrat, was refused an opportunity to address the Democratic National Convention that nominated Bill Clinton and Al Gore.  Casey claimed he was barred because of his opposition to abortion.  The Clinton camp claimed otherwise.  But the history of the party in the decades since speaks for itself.

It's now less and less possible for any genuinely prolife candidate to hope for national office as a Democrat.  Cardinal Dolan's articulate concerns, noted above and voiced earlier this week, will be repeated and amplified by many others in 2018, an election year.  Party leaders chose this course freely, and they've earned whatever bad consequences result in the voting booth.  They have no one to blame but themselves.  In the meantime, they've placed state and local Democratic elected officials – many of whom are good and effective public servants – in needlessly difficult circumstances.

None of this absolves the current White House of its own ugly views, or the Republican Party of its own callous policies, or us as Christians of our duty to help women facing the pressures of an unwanted, unplanned pregnancy.  But a key to simple human decency is this:  Don't intentionally kill the innocent.  One of our national parties is now fully and forcefully committed to tolerating, and even celebrating, the "right" to exactly that kind of killing.

And no amount of dissembling can excuse it.  None.

Reprinted with permission from CatholicPhilly.com