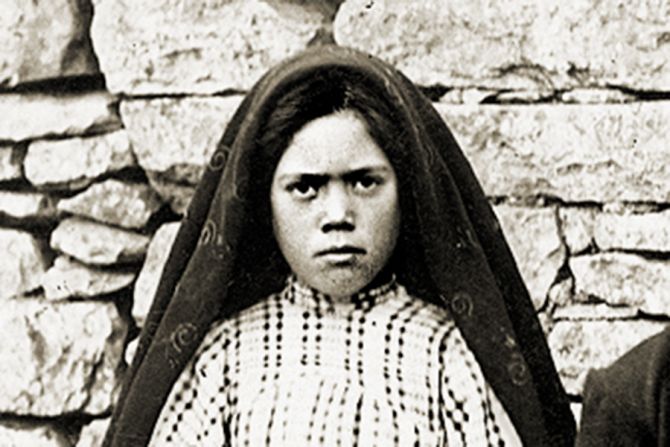 Fatima visionary Lucia dos Santos was saintly woman – not because she saw visions of Mary, but because of her raw humanity, simplicity, and even her sense of humor, says the cardinal who opened her cause for canonization.

When asked about the most "saintly" quality Lucia had, Cardinal Jose Saraiva Martins said it was "her humanity. She was a person that was human."

"The saints are all human, they are like any other person. Very intelligent, very concrete, very pleasant and welcoming," he said.

As for Sister Lucia, "she was a very smart, concrete woman." This can be seen in the way she documented what she saw during the Fatima apparitions, he said, noting that since her cousins had passed away, all of it was done by her alone.

"If Lucia weren't a concrete, intelligent person, not all of the documentation that's there would have been done, through which we know the whole story of Fatima," he said.

But despite to her intelligence and her humanity, the cardinal said the visionary was "very simple," but was also "a jokester" with a healthy sense of humor.

Cardinal Martins, 85 and the Prefect Emeritus of the Congregation for the Causes of Saints, knew Lucia personally during the last few years of her life. He spoke to CNA about his relationship with visionary, sharing memories of Lucia and some of the light-hearted jokes the two of them exchanged.

Lucia dos Santos was the youngest in a family of seven. However, at 10-years-old, she was the oldest of the three shepherd children who witnessed apparitions of the Blessed Virgin Mary from May-October 1917. The other two were her cousins Francisco and Jacinta Marto, who were just 9 and 7, respectively.

While the Marto siblings died shortly after the apparitions, as Mary had predicted, Lucia outlived her cousins by many years, and was the one to write down accounts of everything they had seen.

Shortly after the deaths of her cousins, at age 14 Lucia was sent to attend school with the Dorothean Sisters of Villar, and in 1928 became a sister of St. Dorothy. In 1946, she transferred to the convent of the Carmelite Sisters of Coimbra, Portugal and took the name Sister Maria Lucia of the Immaculate Heart.

She received visions and messages from both Mary and Jesus on several more occasions throughout her life, including the visions in 1925 that led to the Five First Saturday devotions, which include saying the rosary, receiving communion and confession, and meditation during the first Saturday of five consecutive months.

Cardinal Martins, who himself is Portuguese, said he had "many interactions" with Sr. Lucia, particularly during his tenure at the Congregation for Saints. He headed the dicastery from 1998-2008, during which he brought forward some 1,320 blesseds, though many were part of large groups done together.

Having lived in Rome for at least three decades, serving in various capacities, the cardinal said he, like the rest of the city, typically takes his vacation in mid-August.

It was during one of these vacations that he accepted an invitation to go to Coimbra and celebrate Mass for the Carmelite sisters on the Aug. 15 Feast of the Assumption. After Mass, the cardinal sat with the community and talked with them for a while, even answering some questions.

"We spoke about everything, they asked whatever questions they wanted, without limits, and I responded," he said, noting Sr. Lucia was also present, and he was also able to speak with her for the first time.

Lucia "was a very humble person, simple, very intelligent, and very confident," he said, explaining during another visit, he was again sitting with the community after celebrating Mass for them.

He recalled that there was an empty seat by him, so he motioned for Lucia to come sit next to him.

Martins recalled that once she sat down, she leaned over and told him, "Eminence, you've made me your secretary, eh?" After a laugh, the cardinal jested, saying in return, "Sister Lucia, please, don't say this, I am not worthy of having you as a secretary!"

Martins said Lucia was always full of little quips, and at one point jokingly threatened to stop sending rosaries to the Pope if he didn't allow the beatification of her cousins – Francisco and Jacinta Marto – to take place in Fatima, rather than in Rome.

At the time, as a rule of thumb both canonization and beatification Masses were held Rome. However, it was Cardinal Martins who later changed this, requesting that beatifications take place in the local diocese instead. His request was approved by Benedict XVI, and the change was made in September 2005.

The cause of Francisco and Jacinta was officially opened in 1946, and although the change hadn't officially been made yet, they were beatified by St. John Paul II May 13, 2000, the 83rd anniversary of the first apparition, during his third visit to the Fatima shrine.

But a year before the beatification, while plans were still in the works, Lucia had jokingly told Martins to relay to the Pope "if the beatification is not done in Fatima, but in Rome, I, Lucia, won't send him rosaries anymore."

The jest was in reference to the fact that in her final years Lucia made rosaries and sent large numbers of them to the Pope, who would distribute them to pilgrims and people he met.

"Clearly, I didn't say it," the cardinal said, recalling that on the day of the beatification, both he and Lucia had a brief conversation in the sacristy before the celebration began.

"This is how it was. With Lucia, we were like siblings," the cardinal said, adding that Lucia's humor wasn't the only thing that stood out about her.

"She was also very intelligent," he said. People often perceived her as someone "in another world," who was perhaps a bit disconnected, but in reality, the opposite was true: "she was very concrete, and very intelligent."

As an example, he recalled that at one point the Carmelite sisters had to build another convent when they exceeded the maximum number of sisters who can live in one of their monasteries.

When it came time to start construction on the convent after plans had been laid, Lucia was the one sent to oversee the project, making sure the architect built new monastery according to the specifics of how Carmelite convents are organized.

"Lucia went in car to tell the architects concretely how they had to do the cloister. This is a very concrete person, no?" the cardinal said. "She wasn't an abstract person like many thought, no."

After Lucia passed away in 2005, the diocese had to wait five years before opening the beatification cause, as is custom in any potential saint.

However, after just two years, Cardinal Martins asked Benedict XVI to grant a dispensation for the three remaining years, allowing them to open the cause immediately.

I began the process of beatification. Certainly she knows, that to begin the beatification process for a person, five years need to pass after their death. Five years. To research the person, talk to people, etc.

Martins said he asked for the dispensation because "it's a very big grace for the Church in Portugal and for the universal Church." In response, Benedict granted it, saying "you know the situation better than me, so let's do whatever you say."

A few days later, the cardinal traveled to Coimbra with the official decree in hand. However, since the news hadn't yet been made official, he was not allowed to say anything, not even to the sisters in Lucia's convent.

"It was my duty to keep it a secret," Martins said, recounting how at the end of Mass, before giving the final blessing, he read aloud the decree, signed by himself and the Pope, stating that the beatification process for Lucia would officially begin early.

Immediately "the sisters began to cry," he said, and were amazed that he hadn't let on anything of his real intention for coming beforehand.

The local Church in February 2017 finished collecting documents to examine Lucia's heroic virtue, concluding the diocesan phase of the investigation.

"Now it's up to the congregation for the Roman phase. They must study the documents gathered on Lucia," he said, noting that this will be a hefty task given the fact that there are some 300-400,000 letters written by Lucia during her lifetime, including letters written by her and her responses to letters she received from other people.

Although many have speculated that the speed with which Lucia's cause moves forward could go into turbo-mode with the aim of having a beatification during the centenary year of the apparitions, Cardinal Martins said that given the vast amount of content to study, it will likely still be a while.