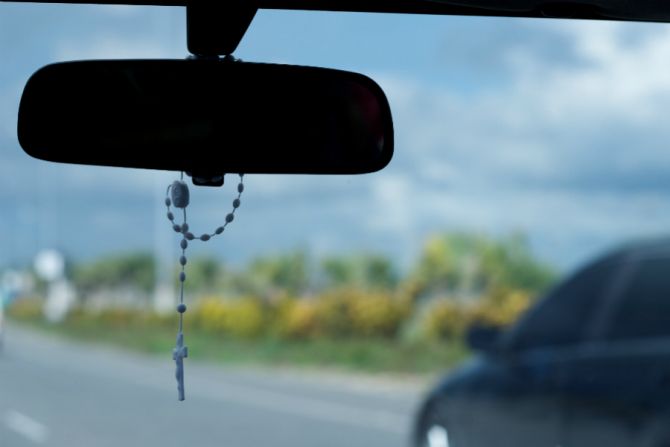 In the most recent clash between the government and the Catholic Church in the Philippines, authorities have banned hanging rosaries and religious icons in vehicles, citing safety concerns.

According to reports from the AFP, the ban is part of a new law that will take effect Friday aimed at eliminating distractions for drivers, including talking or texting on mobile phones, applying makeup, or eating or drinking.

The ban, announced last week, sparked outcry in the majority-Catholic country, where roughly 80 percent of the population identifies as Catholic.

“This is an overreaction, insensitive and lacks common sense," Father Jerome Secillano, executive secretary for public affairs at the Catholic Bishops' Conference of the Philippines, told the AFP.

He said that most drivers feel safer with religious icons in their vehicles, because they give them a sense of divine intervention and protection.

In a statement on the website for the Bishop’s Conference of the Philippines, Fr. Secillano said he believed the ban on religious icons was an over-extension of a law initially meant to cut down on drivers distracted by their cellphones.

“I agree with banning the use of phones while driving but they are absolutely missing the point by prohibiting the display of small religious images in cars,” he said.

The Land Transportation Franchising and Regulatory Board, which issued the ban, has said that religious icons may still be attached to the dashboard or rearview mirror if they do not swing around or block a driver’s line of vision.

Piston, an association of jeepney drivers and owners, a common form of public transportation in the Philippines, said there was no evidence that rosaries and religious icons caused accidents.

“Do not meddle with the drivers’ faith in God,” said its president, George San Mateo.

The ban is just the latest clash of government authorities with the Catholic Church in the country.

The Catholic Church has been one of the most outspoken opponents of President Rodrigo Duterte’s violent and unrelenting war on drugs, as well as his policies on the death penalty and reproductive health that go against the social teaching of the Catholic Church.

President Duterte in turn does not lose much love on the Catholic Church, hurling shocking insults at Church officials who cross him.