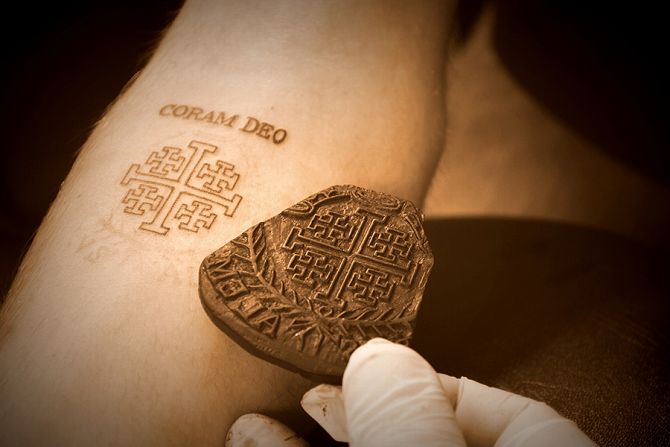 A simple smartphone search can send you on a walk to a centuries-old shop, bring you to the steps of a millennium-old Church, or lead you past the 3,000 year-old Temple Mount – all bursting with people and energy.

But it's only within the stone walls of Razzouk Ink that the modern pilgrim can have that history etched onto his or her body for the rest of their lives.

And Christian pilgrims have come to the tattoo artists of the Razzouk family since the Crusades to receive ancient signs of Christian identity and pilgrimage.

Even today, as the family uses up-to-date procedures and incorporates contemporary trends into some of their artwork, the Razzouk family still draws upon the history and skills passed down through the generations for nearly three-quarters of a millennium. They also incorporate instruments and designs dating back several hundred years, carrying on one of the world's oldest tattoo traditions.

A family legacy, written in ink

Wassim Razzouk, 43, is a tattoo artist descending from a centuries-long line in the trade: 700 years to be exact.

"We are Copts, we come from Egypt, and in Egypt there is a tradition of tattooing Christians, and my great, great ancestors were some of those tattooing the Christian Copts," he told me.

The first evidence of a Christian tattoo tradition traces back to the Holy Land and Egypt as early as the 6th or 7th Century. From there, the tradition spread throughout Eastern Christian communities such as the Ethiopian, Armenian, Syriac and Maronite Churches. To this day, many Coptic Churches require a tattoo of a cross or other proof of Christian faith to enter a church. (Tattoo traditions among groups such as Celtic and Croatian Catholics emerged separately and at a later date.)

With the advent of the Crusades beginning in 1095, the existing practice of tattooing pilgrims to the Holy Land expanded to the European visitors. Numerous accounts dating back to the 1600s describe Christian pilgrims taking part in already long-existing customs of receiving a tattoo upon completing a visit to the Holy City – a custom that survives to this day.

While in the tattoo parlor, I witnessed the Razzouk family help a Roman Catholic bishop from Europe plan a tattoo he hopes to receive once he completes a personal pilgrimage later this year. Only weeks prior, Theophilos, the Coptic Bishop of the Red Sea, came to the Razzouk Family receive a pilgrimage tattoo. Other patrons of the Razzouk family have included Christian leaders of Ethiopia, persecuted Christians, and Christian pilgrims of all denominations from around the globe.

"A lot of them decided to come to the Holy Land as pilgrims themselves and decided to stay," Wassim said. "For the past 500 years, we've been tattooing pilgrims in the Holy Land, and it's been passed down from father to son."

The walls of the shop bear witness to this family legacy. Alongside framed newspaper clippings highlighting the work of Wassim and his father, Anton, are shadow boxes with pictures of the Razzouk tattoo artists that preceded them: Wassim's grandfather, Yacoub, and great-grandfather, Jirius. And artifacts like an early tattoo machine and a traditional hand tool for manually applying tattoo ink are preserved behind glass.

Historically, Christian tattoo artists created their own inks and used stamps to apply images to the skin, before tracing over them with the tattoo implements. While Wassim does not use the old family ink recipe of soot and wine – using instead sterile inks produced specifically for tattoo application – many of the family's 168 historic wooden stamps are still in use today.

In ages past, the tattooist would use the carved wooden stamp directly upon the pilgrim's skin, and then use it as a guide for the traditional tattoo instruments. Today, Wassim stamps the design onto transfer paper, which is then applied to the skin for tracing, similar to the process for more contemporary design transfers.

Over the course of my interview with Wassim, nearly every customer used one of these ancient artifacts as part of their tattoo design. Two women from western Armenia – lands now controlled by eastern Turkey – came in and explained that they had just completed their pilgrimage to the Holy Land and wanted to get a traditional pilgrim's tattoo with no alterations.

They both picked a stamp of the traditional Armenian Cross, a small crucifix that incorporates delicate floral design elements. Razzouk's work was finished by adding the year "2017" underneath the image of the cross to commemorate the year of their pilgrimage.  If they ever return, Wassim explained, the year of each additional pilgrimage will be added underneath.

After the women left, I was shown a drawer filled with dozens of the carved wooden stamps, each holding a unique design. Several stamps were based upon the Jerusalem cross: a cross with arms of equal lengths, with smaller crosses in each of its quarters. Others offered representations of the Virgin Mary, St. Michael the Archangel, the Resurrection, lambs, roses, or the star of Bethlehem. Each of them held deep Christian symbolism and a story behind its meaning.

Most of these wooden blocks, carved from olive and cedar wood, are believed to date back to the 17th century, before the Razzouk family relocated permanently to Jerusalem. However, since only two of the stamps have confirmed dates of carving – from 1749 and 1912 – it's difficult to say for sure. However, Wassim's mother, Hilda, told me that it's believed many of the blocks may date back at least 500, maybe 600 years, to the Razzouk family's early days of tattooing in the Holy Land.

Despite the deep roots of this ancient art form and rite of passage for Christians coming to the Holy Land, traditions of Christian tattooing in Jerusalem have come close to extinction on several occasions.

The Razzouk family tradition came under threat again a little more than ten years ago, when Wassim and his siblings decided to pursue other professions.

"I didn't really want to do this," Wassim told me. "I wasn't into tattooing and since this was sort of a responsibility, I didn't want to do it."

Instead, Wassim studied hospitality and pursued other interests.

"One day I was reading something online, an old article where my father was being interviewed," Wassim recalled.

"He was saying he was really sad: he thought this tradition and this heritage of our family was going to end because I didn't want to do it."

Until a decade ago, Wassim's father, Anton, was the primary tattooist of the Razzouk family, but none of his children had followed him into the ancient profession. The article and the realization of what it would mean to lose his family's heritage weighed heavy on Wassim.

"I didn't want to be that guy whose name was written somewhere in history as the guy who discontinued this – the guy who killed it."

Wassim began to apprentice under his father as well as contemporary tattoo artists, and made some changes to the business, modernizing its health, safety and sterility procedures and business model. He also moved the shop from its location deep in the alleys of the city's Christian Quarter to its current place in on ancient St. George's Street, near the busy Jaffa gate. Today, Wassim and his wife Gabrielle work together at the parlor and have begun to train their children in the craft, though they are careful not to place too much pressure on them to take over the family business.

Visitors to the shop are happy that the Razzouk family legacy has endured. "I don't think there's any way that you could better commemorate a pilgrimage than at this shop," Matt Gates, a pilgrim from Daphne, Alabama told me after he received a tattoo of a Jerusalem Cross.

After a spiritually engaging experience in the Holy Land, Matt said that his new tattoo will hold a particularly special meaning. "That's just such a cool heritage to come into for me getting tattooed with a 500-year-old stencil," he said. "I've got a ton of tattoos, but this one will mean so much more."