An exorcist talks about 'Annabelle' and the power of evil 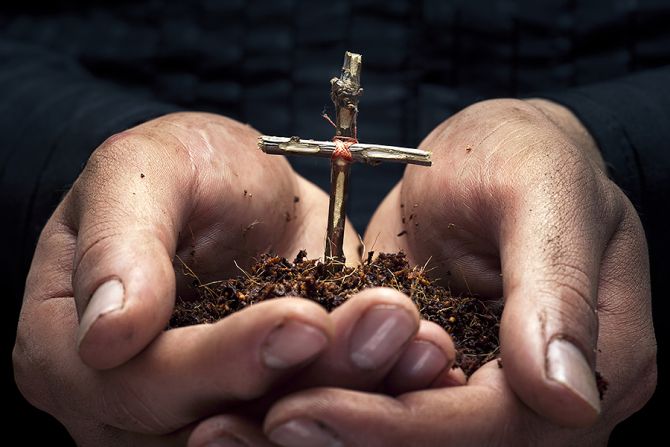 What children read, what they see on the screen, can inspire them toward greater faithfulness. Conversely, Father Robert warns, it can lead them into the sordid world of the occult, even opening them to demonic possession.

Father Robert is not exaggerating. A priest for more than 10 years and an experienced exorcist, he knows firsthand the unintended consequences when children or adults open the door to demonic activity. "Oftentimes," he says, "[demon possession] begins because kids get curious after reading Harry Potter." He explains that kids want the unusual powers that they see depicted on the screen.

One former Satanist whom Father Robert knew personally, a man who has turned away from his past life and embraced the Catholic faith, had begun his descent into Satanism at the age of nine or 10, when he began playing a game called "Bloody Mary." From that simple beginning, he gradually became involved with others who were Satanists.

An important part of Father Robert's ministry is training other priests at the Vatican's official Exorcism Institute in America. From across the country and around the world, Catholic priests come to the Institute to learn the secrets of this ancient rite, so that they too can exorcize demons and evil spirits. The nature of the work that Father Robert and the Institute are involved in is so hazardous that he has requested that the National Catholic Register not publish his full name or reveal his location.

I had the opportunity to meet and talk with Father Robert at a recent media preview of New Line Cinema's latest horror production, "Annabelle: Creation," which opens nationwide on August 11. Directed by David F. Sandberg (director of the short film "Lights Out"), "Annabelle: Creation" is actually a prequel to the highly successful 2014 release of "Annabelle" – which is itself a prequel to the 2013 cult favorite "The Conjuring" and the more recent "Conjuring 2" (2016). Father Robert had seen them all, and he agreed that "Annabelle: Creation" was largely faithful to the Catholic Church's teachings with regard to possession and exorcism.

By Invitation Only: Satan Only Goes Where He Is Invited

Father Robert explained that the devil will only go where he is invited. He talked of two cases he knew of personally in which two young women, not realizing the gravity of their request, had invited "any spiritual being" to help them. The consequence was that they exhibited symptoms of demon possession and required an exorcism.

The writers of the film, Father Robert noted, had done their homework – they understood that the demon could only enter the home of dollmaker Samuel Mullins and his wife Esther if it was invited. In "Annabelle: Creation," Esther and Samuel Mullins are mourning the loss of their beloved daughter Bee. Miranda Otto, who portrays the mother Esther in the film, explained,

Like most parents, they are devastated. But unlike most, they decided that they would do anything to have her back...absolutely anything at all. Basically, they prayed, calling out to any kind of power that would allow them to see her or feel her presence in any way. But by doing so, they evoked certain spirits that are not the kind you would welcome into your home.

Twelve years after the tragic accident, the grieving parents seek comfort by opening their home to Sister Charlotte and several girls from an orphanage that has been closed. When one of the girls peers into the closet and sees the possessed doll, Annabelle, the doll sets her sights on the girls and unleashes a storm of terror.

Father Robert and I agreed that "Annabelle: Creation" was, for the most part, faithful to the Catholic understanding of exorcism. There were, however, a few scenes which caused us both to raise an eyebrow:

A Sister heard confession? – Most particularly, there was a scene in which Sister Charlotte, played by the talented Stephanie Sigman, listens to the confession of one of her young charges. Granted, there were differences from a regular confession: The Sister and the young girl sat back-to-back, not in a confessional. But the concept of confession was renewed when Sister Charlotte said, "Well, for your penance...." Particularly during the time period of the film, Father Robert considered it highly unlikely that a Sister would ever put herself in the position of appearing to perform a sacramental function that requires a priest.

Sister Charlotte wore a contemporary religious habit. – Based upon the clothing styles, classic automobiles, and the Victorian farmhouse, it would seem that "Annabelle: Creation" is set in the early 20th century. However, Sister Charlotte wears what appears a contemporary religious habit – with a knee-length skirt and a simple headpiece which exposed her hair. When I asked director David Sandberg and actress Stephanie Sigman (Sister Charlotte) about that during our interview, both seemed surprised, explaining that they had looked at photos of nuns in different habits and had chosen a simple costume which would make it easier to act the role.

Disposal of the possessed object – In "Annabelle: Creation," two priests come to the home to bless the doll Annabelle and to sprinkle it with holy water before it is sealed away in a Scripture-lined closet. Good as far as it goes, Father Robert thought, but he was adamant that an exorcist would never leave the possessed object there intact, to be found by someone in the future. "You would take the curse off the object," he explained. "You could burn it or take it apart; but it would be decommissioned somehow."

As an example of a possessed object, Father Robert described a crucifix that hangs in his office which was burned from the bottom during an exorcism, the fire consuming the corpus and leaving only the arms of the crucified Christ. "It had a plastic corpus on it," he explained. "The cross itself was blessed. It was put in the room with a woman who practiced Brujería witchcraft in Mexico. In the middle of the night, the cross caught fire. I decommissioned it. I would never permit anyone else to get near it, because it could be used in the future for something wrong."

The scarecrow scene, and the Tasmanian devil – A scene in which a scarecrow was possessed by the evil spirit and moved from its original position seemed unlikely, according to Father Robert. Similarly, he was unconvinced when the demon began to grow and assumed a physical likeness of what he called a "Tasmanian devil."

Only by invitation! – In one scene, a child becomes possessed when she finds herself in the presence of a demon that manifests itself as a little girl. Father Robert rejected the idea that an evil spirit could inhabit the body of a child who happened to be in its presence – since, as he explained earlier, an evil spirit will only enter a person if he is invited.

Father Robert listed five signs which may indicate that a person is suffering spiritual attack:

1.Hidden knowledge. If a person has knowledge which he or she should not have, such as private information which is known by only a few people, that may signal demonic possession.

2.Languages. A possessed person may be able to speak in an unfamiliar language which he or she would not normally know.

3.Superhuman strength. Father Robert reported one case in which a young girl who was 5'4" tall and weighed perhaps 110 pounds was able to throw a number of big guys off of her, preventing them from holding her down during the exorcism ritual.

5.Levitation. Father Robert had personal knowledge of a case in Louisiana, in which a person was seated in a chair and, powered by the evil spirit, was able to levitate with the chair and proceed down the hall.

"Annabelle: Creation" opened in theaters across America on August 11. Despite the small inconsistencies which Father Robert noticed, the film is respectful of faith. The film does an effective job of building tension, and there are repeated "frights"; but it is not really gory and depends on spiritual and psychological effects rather than blood. It's likely to enjoy wide distribution among fans of the horror genre. Rated "R", it seems unsuitable for small children; but others can attend, confident that their faith will not be challenged.

This article was originally published at the National Catholic Register.