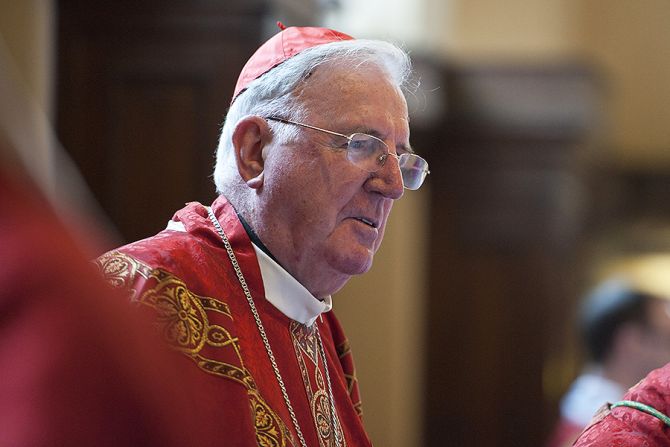 Cardinal Cormac Murphy-O'Connor, who served as Archbishop of Westminster from 2000 to 2009, and who died Sept. 1, 2017. | Mazur/catholicnews.org.uk

Cardinal Cormac Murphy-O'Connor, who served as Archbishop of Westminster for nine years, from 2000-2009, died Friday at the age of 85 after a brief hospitalization. He was well known for his efforts to promote unity between Catholics and Anglicans.

"I am writing to let you know the sad news that Cardinal Cormac Murphy-O'Connor died peacefully this afternoon, surrounded by his family and friends," Cardinal Vincent Nichols of Westminster wrote to his archdiocese Sept. 1.

"Please pray for the repose of his soul. Pray, too, for his family, and those many friends and colleagues from the Diocese and far beyond who mourn his loss."

Cardinal Murphy-O'Connor was admitted to hospital last month. After his admission, he had written to Cardinal Nichols, his successor at Westminster, asking him to share the news of his illness so that the clergy of England and Wales might pray for him.

"As you will know so clearly, for Cardinal Cormac these loving prayers are a source of great strength and comfort as he calmly ponders on all that lies ahead, all in God's good time," Cardinal Nichols wrote Aug. 19.

In a letter to Cardinal Nichols published the day of his death, Cardinal Murphy-O'Connor had written: "At this time, the words I pray every night are never far from my thoughts: 'Into your hands, Lord, I commend my spirit' … I have received many blessings in my life, especially from my family and friends. I thank God for the many priests, religious and lay faithful who have helped and sustained me in my Episcopal life."

"Above all, as I now commend myself to the loving mercy of God, I ask them all to pray for me as I remember and pray for them," the cardinal had written.

Born in Reading Aug. 24, 1932 to an Irish family, Cardinal Murphy-O'Connor studied at the Venerable English College and the Pontifical Gregorian University in Rome starting in 1950, and was ordained a priest of the Diocese of Portsmouth Oct. 28, 1956.

After 15 years as a parish priest, he was appointed rector of the Venerable English College at the end of 1971. As rector, he was also the host to Donald Coggan, the Anglican Archbishop of Canterbury, who visited Bl. Paul VI in Rome in 1977. It was only the third time that an Archbishop of Canterbury and a Pope had met in Rome since the Church of England split from the Holy See.

In November 1977 Cardinal Murphy-O'Connor was appointed Bishop of Arundel and Brighton, where he served until he was transferred to the Archdiocese of Westminster in 2000. He was made a cardinal by St. John Paul II the following year.

While head of the Westminster archdiocese, he also served as president of the English and Welsh bishops' conference, and was a member of several Vatican dicasteries.

His retirement as archbishop, at the age of 76, was accepted by Benedict XVI in April 2009.

Although unusual for a retired bishop, he was appointed a member of the Congregation of Bishops and the Congregation for the Evangelization of Peoples in October 2009. He served in these congregations until his 80th birthday.

In recognition of his work for Christian unity throughout his episcopate, the cardinal was awarded an honorary doctorate of divinity by George Carey, Anglican Archbishop of Canterbury, in 2000.

He was criticized when it was discovered that as Bishop of Arundel and Brighton he had failed to report a priest, Fr. Michael Hill, who was convicted for child sexual abuse in 1997. After this incident, Cardinal Murphy-O'Connor invited the judge Lord Nolan in 2000 to investigate the issue of pedophile priests and child protection in the Catholic Church in England and Wales.

The Nolan Report was published in 2001. As a result of the report, the Church in England and Wales formed the Catholic Office for the Protection of Children and Vulnerable Adults to centrally manage applications through the Criminal Records Bureau ensuring thorough background checks of anyone working with children or vulnerable adults.

In 2002, Cardinal Murphy-O'Connor launched a spiritual renewal program in Westminster which during its three years brought together 20,000 people in regular weekly faith groups throughout the diocese.

It was also in 2002 that he became the first member of the Catholic hierarchy to deliver a sermon to an English monarch since 1680. At the invitation of Queen Elizabeth II, he gave a homily for members of the royal family during the Anglican morning service at Sandringham, the queen's country residence in Norfolk.

Pope Francis sent Cardinal Nichols a telegram Sept. 2 offering his condolences for Cardinal Murphy-O'Connor's death. "Recalling with immense gratitude the late cardinal's distinguished service to the Church in England and Wales, his unwavering devotion to the preaching of the Gospel and the care of the poor, and his far-sighted commitment to the advancement of ecumenical and interreligious understanding, I willingly join you in commending his noble soul to the infinite mercies of God our heavenly Father," the Pope wrote.

Justin Welby, the Anglican Archbishop of Canterbury, said Friday that Cardinal Murphy-O'Connor's death "represents a loss to his innumerable friends, to the church and to the country … his humility, sense and holiness made him a church leader of immense impact."

"His words and his life drew people to God. His genial warmth, pastoral concern and genuine love for those in his care will be missed, but also celebrated with thanks. May he rest in peace and rise in glory."

Funeral arrangements for the cardinal have yet to be announced.