Catholic youth have something to say – and the Church is listening 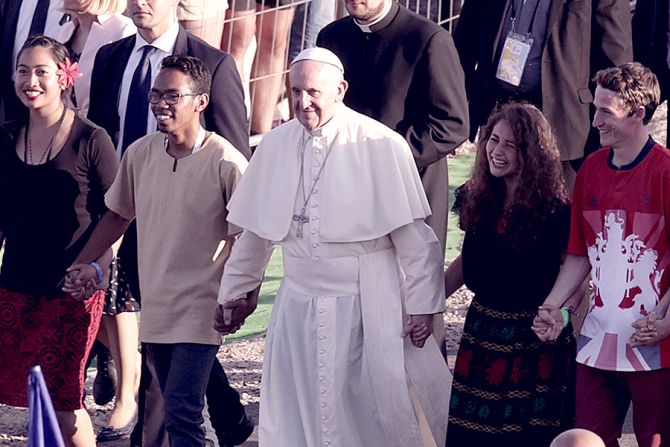 Pope Francis at WYD in Poland, 2016. | Marcin Kadziolka via Shutterstock.

As preparations continue for next year's Synod of Bishops on young people, the Vatican hosted young adults and global experts for a seminar in Rome aimed at listening to the experiences of youth from around the world.

"So far we can see everyone allowing us time. The progression from the first day to today, is that they've given us more time to speak and given the microphone to the youth to share their thoughts and feelings," Caroline Montefrio, 28, told CNA Sept. 14.

"And I guess that's a direction led by the Holy Spirit to know that the Church really wants to listen to us."

"And they're also the future, our future, our hope, of the Church and of the world as well. If we manage to give this testimony of happiness, of joy, and of life lived to the fullest, I believe we will also manage to walk with our youth and proclaim Jesus as well."

The Sept. 11-15 seminar was led by Cardinal Lorenzo Baldisseri, Secretary General of the Synod of Bishops, and included young adults from almost every continent. The schedule included presentations from experts as well as time for young people to share their experiences.

Small working groups made up of people of various ages and vocations also were a large part of the week's work.

Topics during the preparatory seminar included, among other things, technological advancement and migration and their effect on youth. Originally from the Philippines, but raised in Dubai, Montefrio said that the challenge of migration is something that she could relate to.

"I know there are other youth like me, who lack that sense of identity. Because you're not from this country, and you're also not from your home country," she said.

"To know that the Church focuses on your identity as a son or daughter of God and your identity as part of the bigger Catholic Church, that's a good starting point to know where you are in life and how this leads up to your purpose in life."

Because the theme for the October 2018 General Assembly of the Synod of Bishops is formally "Young People, the Faith and the Discernment of Vocation," vocation was a large topic at the seminar, and something various young participants named as important elements of their lives.

Ashleigh Green, from the Diocese of Broken Bay, Australia said that she thinks the process of finding your vocation is necessary for living "a full and meaningful life."

"Because at the end of the day, everyone has a purpose and everyone has something to contribute and God has a plan for everyone, so it's up to all of us to search for what it is that God's calling us to in our life."

Green said that one thing that helped her in discerning her vocation, besides prayer and time in silence, was the presence of good mentors in her life.

Kerishé Higgins, 29, and a youth director in Jamaica, also noted the importance of accompaniment. She mentioned that at a time when she was deeply struggling with her faith, lack of support was very apparent.

No one is perfect, she acknowledged, but what is important is that you have a community of people who are all trying to live out the call to sainthood, to holiness. "That constant striving," she said.

Her hope for the outcome of the synod is that "we recognize that as a community each person has a part to play and that we play that part." But to do that, young people need the support of the Church, she said.

"And I think that's what I have personally been trying to do and that's what the synod is trying to teach us, to tell us how is it that we are going to try to live out this call to holiness, that it's not just one-on-one, but it's a community," she said.

"And that's what the Church should be. It should be that home of community where we come together and we journey and we grow and we love each other."

Green said that in Australia they carried out a survey of 15,000 young people, and one issue identified by participants as important to their lives was mental illness. Green said she thinks the loss of community is one reason for the high rates of mental illness.

"To experience that community in our parishes through all of the various liturgical aspects and the social aspects is something that's really, really important."

The seminar follows a conference in April which focused on World Youth Day, but also included two days of presentations and discussion on the preparatory document for the 2018 synod.

According to an April 6 statement, Cardinal Baldisseri said it's important to note that the upcoming synod is not being put on by young people or about them as subjects of study, but that it is for them, and that is why it is important they are included.

"A lot of young people, particularly in Australia, give up on the Church before even giving it a go, out of fear that they can't talk about the issues that are important to them. That they wouldn't feel welcomed in the Church," Green said.

"So I really hope that from this synod, more young people do feel like they have a place in the Church and that they don't have to fit into a small box to feel like they're welcome here. And that's what Pope Francis has been emphasizing all along, that this synod isn't just for young Catholics…but that it's called a synod on youth and that it's for everyone."