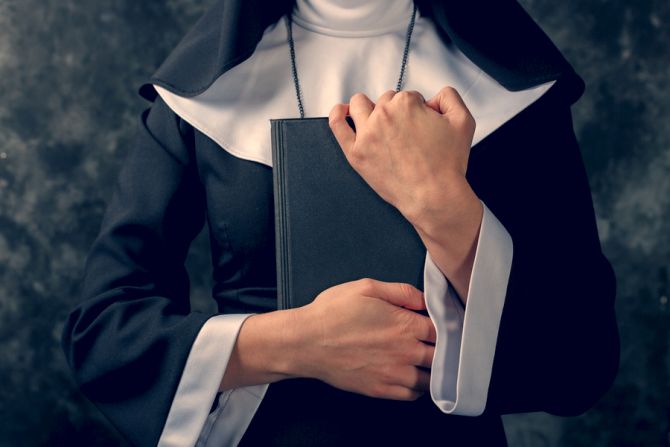 "I want to personally apologize for the recent incident and any pain that it may have caused our students, faculty, staff and the community. We did not intend to cause harm or to be insensitive," President James R. Ramsey said in a statement at the time.

In 2016, a student was expelled from his fraternity at the University of Central Arkansas for posting a picture of himself in blackface for Halloween.

This year, many have voiced offense at a new "Anne Frank" costume.

Over the past few years, several colleges and universities have issued guidelines and warnings on insensitive Halloween costumes, asking students to steer clear of costumes that may offend cultures, races, or minority groups.

Seemingly still permissible, though, are the "sexy nun," and "pregnant nun" costumes that inevitably show up in Halloween advertisements and stores this time of year, and are often absent from lists of potentially offensive and insensitive Halloween attire.

But is wearing a sexy nun costume any less offensive than donning a sombrero and fake mustache?

"This reflects a coarseness in the culture," Sister Gilmary Kay of the Religious Sisters of Mercy told CNA.

"It's not a surprise that such things exist….(but) it's alarming, it's such an offense against goodness and sacredness," she said.

Not only do such costumes denigrate each woman who is a religious sister, they also denigrate God, she noted.

"It's not that each sister is good, but what they represent is good. Consecrated persons are given to God alone, 'consecrata' means to be set apart for a holy purpose. As a culture, we should honor those things that remind us of goodness or high ideals, even if you're not Catholic," she said.

"So to disrespect a sister in that way, it's a mockery of not just her or the Church, but ultimately God."

The sad irony, Sister Gilmary added, is that Halloween is the eve of All Saints Day, and should be a time to remember the saints – many of whom were religious sisters and brothers – as examples and models to follow in our own lives.

Furthermore, just as it would be culturally offensive to denigrate figures like Martin Luther King Jr. or Mahatma Ghandi, it should be equally unacceptable to mock Catholic figures, she noted.

"I think of a figure like Martin Luther King, who has high ideals, people honor him – if he were depicted in costume with a KKK uniform or something, it's so opposite of what he is and what he represents, that would be akin to sisters in this kind of dress or somehow showing that sexual perversity," she said.

The reason that costumes depicting cultural and ethnic stereotypes cause so much offense and uproar is that those who know real people of those cultures and ethnicities see them as more than what a costume depicts, Sr. Gilmary added.

"I work with religious, I'm a religious, and that's not religious," she said. "These are people who love God, who've given their life for God, who aren't looking to be in the spotlight in any way. And their goodness and selfless service – that kind of depiction, besides mockery... ultimately kind of comes back and just denigrates the person who wears them as well."

Most sisters who see people in such costumes tend to pray for the person, Sr. Gilmary said. While Catholics and Christians have a right to be offended at such costumes, our faith calls us to move past offense, and to forgive and pray for people who mock the faith, she added.

In a way, Sr. Gilmary said, mocking the faith is kind of a "backhanded compliment," because it means those who are doing the mocking see something true and substantial in Christianity.

"We stand for something, and there's a substantial claim made if you hold to these things, and we believe those claims are from God," she said. "And religious (sisters) try to live their life in a most radical way, so if that's challenging to the culture, those people are the ones who will be mocked."

"The Lord himself was mocked, and his disciples were mocked. And we look at how they responded," she added.

"We're praying for them, and we hope that they come and see the depth (of religious life). It's like what the Lord said: you know not what you do. Because the ones they're hurting are themselves."