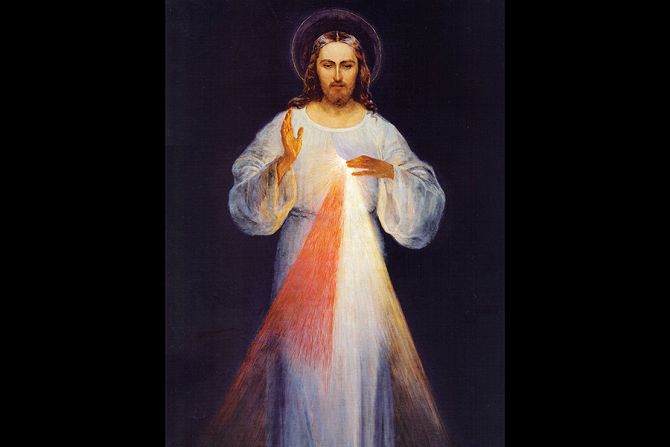 Original painting of the Divine Mercy, by Eugeniusz Kazimirowski in 1934. Wikimedia Commons 4.0.

Among Catholic devotions, the Divine Mercy message is well-known: the iconic image of Christ, with rays of red and white pouring from his heart; St. Faustina, called the "Apostle of Divine Mercy;" and the Basilica of Divine Mercy in Krakow, Poland.

But what you might not know is that more than 450 miles north of Krakow, in the Lithuanian capital Vilnius, there is another Sanctuary of Divine Mercy, one which houses the first image of the merciful Jesus created, and the only Image of Divine Mercy St. Faustina herself ever saw.

Archbishop Gintaras Grusas of Vilnius told CNA that the city, often called the "City of Mercy," is not only "a place of the Divine Mercy revelations, but also a place that is in need of mercy, throughout history, and a place that in the last couple decades has been a place where we need to show mercy."

Since long before St. Faustina and the Divine Mercy revelations, the Mother of Mercy has been the patroness of Vilnius, Grusas said.

In fact, in the 1600s, a painting of Our Lady of the Gate of Dawn was created and placed in a niche above one of the prominent city gates. Many miracles are attributed to the image, which was canonically crowned Mother of Mercy by Pope Pius XI in 1927.

It was in this small chapel of the Mother of Mercy, above the gate, that the image of Divine Mercy was first displayed. So Vilnius has had "mercy upon mercy," Grusas noted.

The story of St. Faustina and Divine Mercy

St. Faustina Kowalska was a young Polish nun born at the beginning of the 20th century. Over the course of several years she had visions of Jesus, whereby she was directed to create an image and to share with the world revelations of Jesus' love and mercy.

St. Faustina received her first revelation of the merciful Jesus in Plock, Poland in February 1931. At the time, she had made her first vows as one of the Sisters of Our Lady of Mercy.

In 1933, after she made her perpetual vows, her superior directed her to move to the convent house in Vilnius. She stayed there for three years and this is where she received many more visions of Jesus. Vilnius is also where she found a priest to be her spiritual director, the now-Bl. Michael Sopocko.

With the help of Fr. Sopocko, St. Faustina found a painter to fulfill the request Jesus had made to her in one of the visions – to "paint an image according to the pattern you see, with the signature: Jesus, I trust in You" – and in 1934 the painter Eugene Kazimierowski created the original Divine Mercy painting under St. Faustina's direction.

In its creation, St. Faustina "was instrumental in making all the adjustments with the painter," Archbishop Grusas said.

The image shows Christ with his right hand raised as if giving a blessing, and the left touching his chest. Two rays, one pale, one red – which Jesus said are to signify water and blood – are descending from his heart.

St. Faustina recorded all of her visions and conversations with Jesus in her diary, called Divine Mercy in My Soul. Here she wrote the words of Jesus about the graces that would pour out on anyone who prayed before the image:

"I promise that the soul that will venerate this image will not perish. I also promise victory over [its] enemies already here on earth, especially at the hour of death. I Myself will defend [that soul] as My own glory."

When the image was completed, it was first kept in the corridor of the convent of the Bernardine Sisters, which was beside the Church of St. Michael where Fr. Sopocko was rector.

In March 1936 St. Faustina became sick, with what is believed to have been tuberculosis, and was transferred back to Poland by her superiors. She died near Krakow in October 1938, at the age of 33.

"St. Faustina, because of her illness, was brought back to Krakow by her superiors. But she left the painting in Vilnius because it was the property of her spiritual director, who paid for the painting," Grusas explained.

Jesus, in one of St. Faustina's visions, had expressed his wish that the image be put in a place of honor, above the main altar of the church. And so, though St. Faustina had already returned to Poland, on the first Sunday after Easter in 1937, they hung the image of Merciful Jesus next to the main altar in the Church of St. Michael.

The history of the image

Archbishop Grusas explained that many people have only recently learned about the image because it was hidden for many years, and it was only rediscovered and restored within the last 15 years.

During World War II, Lithuania was under Soviet occupation and in 1948, the communist government closed the Church of St. Michael and abolished the convent. Many of the sacred objects and artworks were moved to another church to be saved from Soviet hands, but the Divine Mercy image was left undisturbed in St. Michael's for several years.

In 1951, two women were able to pay the keeper of St. Michael's church and save the image. Since it couldn't be taken across the border to Poland, they gave it to the priest in charge of the Church of the Holy Spirit for safekeeping.

Five years later it was moved to a church in Belarus, where it remained for over a decade. In 1970 this church too was shut down by the government and looted, but miraculously, again the Image of Divine Mercy was untouched.

Eventually it was brought back to Lithuania in secret and again given to the Church of the Holy Spirit. In the early 2000s its significance was rediscovered and after a professional restoration it was rehung in the nearby Church of the Holy Trinity in 2005, which is now the Shrine of Divine Mercy.

So though it is a more recent arrival on the international scene, the painting "is also probably the most profound of the Divine Mercy paintings," Grusas said. "It has a very deep theology, very closely tied with St. Faustina's diary."

The Shrine of Divine Mercy

Today in Vilnius the archdiocese has begun to set up a guide for pilgrims who come and wish to visit the holy sites, such as the place where St. Faustina lived, the room where the image was painted, and the several churches which all held the painting at different points.

The Shrine of Divine Mercy itself is not a large place, since it's only a converted parish church, but its sacramental life "is really quite something," said Justin Gough, an American seminarian studying in Rome who spent a summer working in the Archdiocese's pilgrim office in Vilnius.

He said that "between Mass, the Divine Mercy chaplet every day in Lithuanian and Polish, adoration 24/7… vespers every Sunday night led by the youth of Vilnius," the rosary and the sacrament of Confession, there is always some sort of prayer or sacrament taking place.

Of course the original Image of Divine Mercy is also there, he pointed out, and yet the shrine is not just about the image, but about connecting the image and what it represents to prayer and the reception of God's mercy through the sacraments.

"I think it's ironic in a certain sense that God teaches us about his mercy through a holy woman who died at the age of 33," he said. "She lived a very devout life, endured great sufferings for the sake of Christ, and yet it's through people like her that we're taught, great sinners that we are, how to actually receive God's mercy and to be merciful to others."

In Vilnius, it's a great blessing "to know a saint of the 20th century walked here, prayed here, and experienced Christ here, and that we can do that as well."