Wounded veterans seek healing and peace in the waters of Lourdes 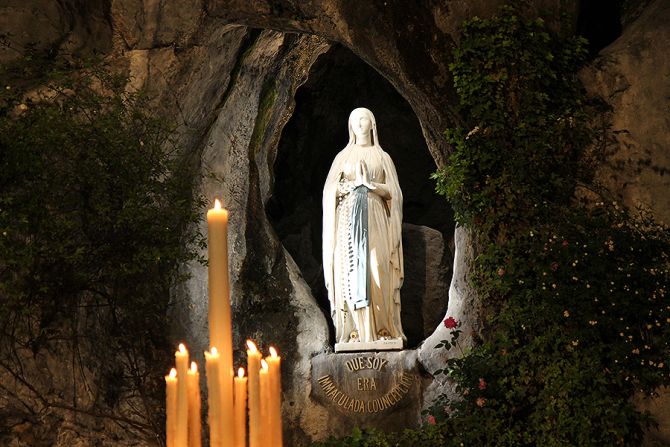 American veterans in search of healing attended a recent pilgrimage to Lourdes, through the Archdiocese for Military Services and the Knights of Columbus.

Among the pilgrims was Charles Baldinger, a West Point-educated infantry officer who had to retire due to Stage 4 brain cancer.

"We came for physical healing with my right side and speech. We got spiritual healing and strength for the journey instead and it was more important," he said in a video recap for the Knights of Columbus.

The pilgrimage coordinator, Col. Charles Gallia, USMC (Ret.), said the event gives "the moral courage and spiritual strength to address the issues and problems of your life whether they're physical, mental, moral. That's the healing power of Lourdes and the Blessed Mother."

"Understanding the physical and moral wounds of war, there is a need for peace and reconciliation," Gallia added.

The Warriors to Lourdes pilgrimage, held May 15-22, drew over 200 pilgrims, including 10 from Ukraine. The pilgrimage included opportunities for daily Mass, times for reflection and reconciliation, and the chance to bathe in the waters of Lourdes.

Father Mark Bristol, a military chaplain, said the Warriors to Lourdes program gives the pilgrims an experience "to encounter God in a powerful way." Whatever they are undergoing, "they're not alone and that more importantly there's people to walk with them to accompany them along the way."

The American Lourdes pilgrimage joined the 60th annual International Military Pilgrimage, which was launched after World War II to foster reconciliation, peace and healing. Its theme this year is "Pacem in Terris," a Latin phrase meaning "Peace on Earth" and the title of a 1963 encyclical by Pope St. John XXIII. Forty countries from six continents were represented.

Archbishop Timothy Broglio of the Archdiocese for the Military Services celebrated Mass for the American pilgrims on May 18 at the Rosary Basilica. His archdiocese serves the spiritual and sacramental needs of about 1.8 million Catholics worldwide.

"The Marian Shrine at Lourdes is a place of hope where healings of many types take place, both physical and spiritual," Knights of Columbus CEO Carl Anderson said May 14. "It is an opportunity for active-duty personnel, veterans and their caregivers to experience an abundance of peace and consolation while in this holy place."

Father Zachary Miller, a military chaplain, said that when he left the military, he "never really found closure from my service."

"I came here not necessarily as a priest, I came here as someone who is wounded, someone who needs healing," he said. "So I found my closure through Mary through our mother the mother of God the Mother of Peace."

The celebration of Pentecost Mass with nations from around the world showed "we are here to set an example that we can have a relationship of peace," he added.

Fr. Jeffrey Laible, another priest on the pilgrimage, reflected on the event's importance.

"Often times our troops are looking for forgiveness for what they might have seen or done, especially when they're in combat feeling guilt or shame anger," the priest said. "Warrior to Lourdes pilgrimage help our service members to experience healing and forgiveness."

On Saturday evening, a ceremony was held at the War Memorial to show respect for those killed in war. It drew heads of state, ministers, and senior military and religious figures. The memorial was built after the First World War, which ended 100 years ago.

Bishop Antoine de Romanet of the Military Ordinariate of France, the president of the International Military Pilgrimage, laid a wreath at the memorial.

Ahead of the pilgrimage, Archbishop Broglio had urged the pilgrims to pray "for progress in international dialogue, welcome for the immigrant, and a decrease in violence in our communities and the world."

The archbishop thanked the Knights "who have so generously made possible the pilgrimage of many wounded warriors and infirm veterans who would not otherwise have been able to join in this important international prayer for peace."