A mortar attack on a Jesuit university in Nicaragua last weekend resulted in no deaths or injuries, and has been condemned by the school's rector as "cowardly."

On May 27, three masked people fired mortar at two guards standing at the main gate of the University of Central America, located in the country's capital of Managua.

Fr. José Alberto Idiáquez, the rector of the university, denounced "...this cowardly night attack by para-police forces that, protected by the impunity guaranteed by the current (government), have been using the hours of the night to intimidate and kill innocent citizens in the neighborhoods of the capital and other cities."

"Although they did not succeed in wounding or killing any of our guards, that was the intent, because of the charge of gunpowder used and because of the closeness of the shot," he added.

The attack is the latest in a spate of violence and civil unrest in the country, which began April 18 after President Daniel Ortega announced social security and pension reforms. The changes were soon abandoned in the face of widespread, vocal opposition, but protests have only intensified after more than 40 protesters were killed by security forces.

In his statement, Idiaquez said that this is the second time the university has been under attack, noting the destruction of the school's entrance during the April 18 protests.

The university, which has become a center of student-led anti-government activism, suspended all academic and administrative activities in the days following the latest attack.

Protesters have called for freedom of expression, an end to violent repression, and for Ortega to step down from office.

The Inter-American Commission on Human Rights has also expressed human rights concerns regarding the violence and visited Nicaragua May 17-21 to document human rights violations in four cities and to issue recommendations.

The commission found that since protests began, at least 76 have died and 868 have been injured, including a priest of the Diocese of Matagalpa who was wounded by shrapnel May 15 while trying to separate protesters and security forces, according to the AP.

The Church in the country has been quick to acknowledge the protestors' complaints and to attempt to mediate peace with the government.

On May 22, the Catholic bishops of the country encouraged Ortega to create "a mechanism of international investigation of the acts of violence which occurred, with guarantees of autonomy and independence to ensure the right to the truth and duly identify those responsible."

In their letter to Ortega, the bishops stressed the importance of continued dialogues to work towards peace.

On the same day that the letter was issued, the bishop's conference also announced that bishops and priests are being discredited by attacks orchestrated by the government and that they have been receiving death threats through "anonymous social media" posts.

On May 23, Cardinal Leopoldo Brenes of Managua announced that peace talks had been suspended indefinitely after reaching an impasse with the government, which refused to discuss an agenda presented by the bishops that included suggested reforms to presidential elections, according to ABC News. However, Brenes said he is hopeful the talks can eventually continue. 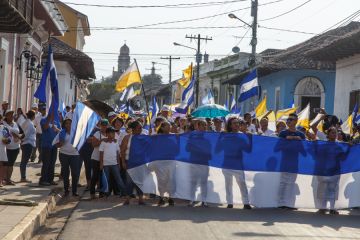