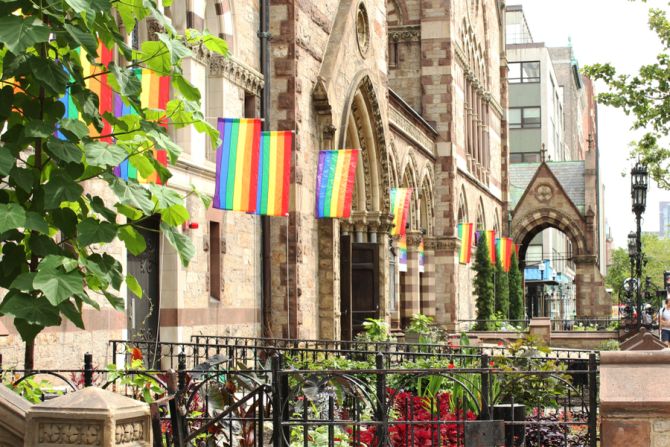 The Archdiocese of Chicago has confirmed the temporary removal of the parish priest at the center of a controversy over the burning of a rainbow banner. According to the archdiocese, Fr. Paul Kalchik has "left willingly" from his Chicago parish "to receive pastoral care."

In a letter released Sept. 21, Cardinal Blase Cupich told parishioners that the decision was "not taken lightly" but that he had "become increasingly concerned about a number of issues at Resurrection Parish" over a period of several weeks.

In the same letter, Cupich appointed a temporary administrator for the parish, while an archdiocesan spokesperson told CNA that Kalchik officially remains the pastor.

Kalchik received considerable media attention following an announcement that he would publicly burn a rainbow banner belonging to the parish.

In a Sept. 2 notice in the parish newsletter, Kalchik said that he would burn the banner, which he believed to symbolize a homosexual agenda contrary to Church teaching, in front of the church building. The event was scheduled to be held Sept. 29, the Feast of the Archangels.

The banner had previously been displayed in the parish church, beginning in 1991, but had been in storage for a number of years. According to a Resurrection Parish newsletter distributed Sept. 23, it was found "just when the news of the gay predation of Cardinal McCarrick broke."

The newsletter said that its previous display had been "sacrilegious."

When news of the announcement spread the following week, the archdiocese contacted Kalchik and instructed him to cancel the event.

A spokesperson for the archdiocese told CNA that the archdiocesan vicar for clergy telephoned Kalchik, instructing him not to proceed, and the two had "mutually agreed that the event would not take place."

While Kalchik told the Chicago Sun-Times Sept. 18 that the archdiocese threatened him with "canonical penalties," the archdiocese told CNA that there was no discussion of potential consequences for burning the flag because Kalchik voluntarily agreed to comply with the instruction.

Despite this apparent agreement, the banner was burned Sept. 14 in the fire pit ordinarily used by the parish during the Easter Vigil liturgy. While the event was reportedly attended by Kalchik and only a handful of parishioners, images of the flag burning were circulated on the internet and generated strong reactions.

Some groups labeled Kalchik as homophobic and said the burning was a deliberately provocative act. A group called the Northwest Side Coalition Against Racism and Hate organized a demonstration Sept. 19 condemning the priest's action.

Others have treated the priest's apparent act of defiance as a stand against what they see as pro-homosexual agenda in some parts of the Church.

Kalchik told NBC News last week that he had disposed of the banner "in a quiet way" but insisted that the banner belonged to the parish, and that the parish had the "full right to destroy it."

Kalchik said that it had been done "privately because the archdiocese was breathing on our back."

Fr. Thomas Petri, OP, academic dean of the Dominican-run Pontifical Faculty of the Immaculate Conception in Washington, D.C., told CNA that it is common for church decorations, vestments, and altar cloths to be burned when they became "worn, old, or simply artifacts from a bygone era in terms of style and taste," but he stressed that they must be disposed of reverently.

"The usual method is to burn these items, or to bury them in a place where they will not be disturbed," Petri said.

"Items dedicated for the worship of God cannot be used for any other use. This is why they are burned or buried; they are given to God completely and so rendered unusable to us. I presume the same is true for banners and hangings used in the sanctuary of a Church but I don't know that this has ever been stated."

In this case, it is not clear if the Archdiocese of Chicago objected to the burning itself, or to the public nature of the action and the apparent symbolism it was intended to convey.

In an interview after the flag was burned, Fr. Kalchik appeared to criticize openly his archbishop, Cardinal Cupich, whom he accused of downplaying the Church's teaching on homosexuality and of rejecting a link between homosexuality and sexual abuse by clergy.

"I can't sit well with people like Cardinal Cupich, who minimizes all of this," he told the Chicago Sun-Times. "Excuse me, but almost all of the [abuse] cases are, with respect to priests, bishops and whatnot, taking and using other young men sexually. It's definitely a gay thing."

Some Church commentators have suggested that Kalchik was right to go against Cupich's instruction. But Petri said priestly obedience to his bishop is not a light matter.

"We priests promise obedience to the bishop when we are ordained," he said.

"Clearly, no bishop could command a priest to do something against the divine law, but, short of that, every priest, in my view, needs to give his bishop the benefit of the doubt and be obedient upon first request."

Petri also pointed out that in serious cases, if the matter in grave and the priest disagrees, he should reason with his bishop about the request and, if necessary, appeal to the Holy See.

He told CNA that while the banner itself may have symbolized a wider agenda to some, it was important to consider both the potential effects of making the burning a public event, and the discernment of the bishop - in this case Cardinal Cupich.

"I think it's sad that the rainbow has become the symbol of a movement and a lifestyle that very much flaunts a disordered sexuality and is opposed to the virtue of chastity," Petri said.

"Yet, I know there are many homosexual men and women living a secular gay lifestyle, who wave the rainbow flag and identify with it, but who are, at the same time, already questioning the so-called gay scene, the pitfalls of the gay culture, and who are open, by the grace of God, to the healing and virtue that the Church can offer them."

"I do not see how a priest who openly burns the symbol of a secular gay culture can hope to minister to or reach out to those men and women," Petri told CNA. Instead, he said, the emphasis should remain on pastoral concern, not alienation.

"Regardless of intent, when publicly announced it cannot but be viewed as a provocative and acrimonious gesture."

"I suspect this is why the Archbishop of Chicago requested Fr. Kalchik not burn the banner publicly himself or be present when parishioners did so. It creates a spectacle that makes the priest an enemy of people he may one day need to shepherd."

Despite the ongoing controversy, the Archdiocese of Chicago told CNA that Kalchik's removal from the parish was not a direct consequence of his decision to go ahead with burning the banner, or his subsequent comments to the media.

Instead, the archdiocese reiterated that the cardinal had been concerned about "several issues in the parish" and that Kalchik's break from ministry had "been in the works" prior to the emergence of the flag issue.

The archdiocese declined to comment on what issues specifically had drawn the cardinal's attention to the parish, or what prompted him to decide that the pastor be asked to step aside.

Fr. Kalchik has spoken publicly about his personal experience as a victim of sexual abuse, first as a child at the hands of a neighbor, and also by a priest when he was a young man and seminarian.

At least some parishioners at Resurrection suggested that his recent actions and statements should be viewed in that context, even if they did not agree with them personally. The most recent parish newsletter asked that those objecting to Kalchik's actions  to "at least ask yourself what the banner represented to him as a victim [of sexual abuse]."

Fr. Petri added that Kalchik's status as a victim merited concern and prayer, as does all abuse survivors.

"I understand that Fr. Kalchik was abused. I'll pray for him as my brother priest who is also a victim. I do not stand in judgment and cannot presume to comment on his intentions or motivations."

The circumstances of Kalchik's absence from the parish remain unclear and have been the subject of considerable speculation, along with his current whereabouts.

Newsweek cited reports that there had been a heated exchange between Kalchik and two archdiocesan representatives, who allegedly threatened to have him sent to the St. Luke's Institute in Silver Spring, Maryland, a mental health care facility.

The archdiocese declined to comment on the report that Kalchik was instructed to present himself at the St. Luke's Institute for psychiatric evaluation.

The archdiocese also declined to comment on a Chicago Sun-Times report that Cupich has blocked a recent request from Kalchik to move to a diocese in Michigan in order to be closer to his family.

Several questions about the temporary removal of Fr. Kalchik from the parish also remain unanswered.

Despite assurances from the Archdiocese of Chicago that Kalchik's break from ministry was by mutual agreement, accounts have surfaced that chancery representatives threatened to call the police if he refused to leave the parish. When asked about this report specifically, a spokesperson for the Archdiocese would only repeat that "Fr. Kalchik left willingly to receive pastoral support."

Although the archdiocese  insists that it was unrelated to the controversy surrounding the banner, no indication has been given to local parishioners - many of whom say they support Kalchik - as to exactly why their pastor was removed.

An archdiocesan spokesman did tell CNA that Kalchik was now "working with the vicar for clergy to get the support he needs."