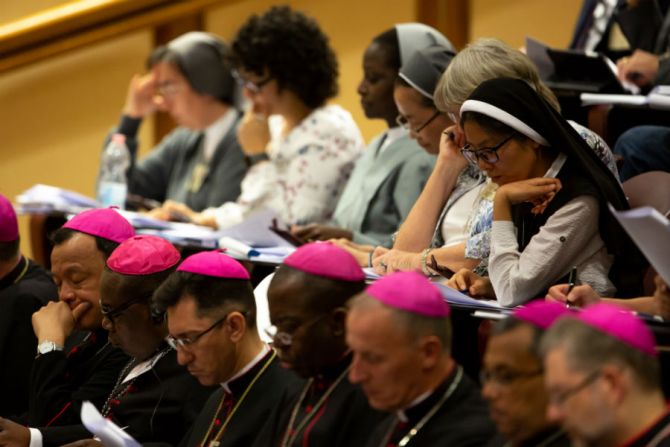 The head of Vatican communications said Monday the youth synod's final document will be voted on "part by part," requiring a 2/3 majority to pass each section, before being forwarded to Pope Francis.

Speaking at a press briefing Oct. 15, Paolo Ruffini, who serves as Prefect of the Vatican's Dicastery for Communications, said the voting on the concluding report produced by the synod on young people, faith, and vocational discernment will take place Saturday, Oct. 27 – the second to last day of the assembly.

Each numbered section will be considered by the synod fathers and require a 2/3 majority to pass.

"Regarding the rules [of the voting], when there are additional rules I can share with you, I will," Ruffini told journalists.

He said he did not know what languages the final document will be available in at the time of voting, or how translation will work for those bishops who do not speak or read Italian, but added that he believed the synod fathers will have the opportunity to understand what is being stated in each part of the report before voting.

What exactly the format of the final document will be is also still being determined. Discussions are ongoing on whether the document will be accompanied by a separate message to young people, or include a message within it, as was discussed last week in some of the small working groups, Ruffini said.

He noted that efforts were being made to draft a "new document" based on the synod discussions – both in the general congregations and small groups – rather than just retooling the working document, called an Instrumentum laboris, for use as the final report. This followed requests to this effect from several of the working groups last week.

Ruffini indicated that the final draft could take a less comprehensive approach – as it has done following previous synodal sessions  – with the pope being presented with individual paragraphs of numbered propositions passed by a vote of the bishops. Rather than producing a document to be read for its own sake, these propositions would be intended to help inform the writing of the pope's traditional post-synodal apostolic exhortation.

If this is indeed the format the final document takes following the Synod of Bishops meeting on youth, questions remain as to whether any propositions which do not pass with the needed 2/3 majority will be made public.

Ruffini said that the 12 members of the writing commission, elected last week, have begun work on the final report, focusing on parts one and two of the Instrumentum laboris, and are working to integrate what has come out of the small group discussions thus far.