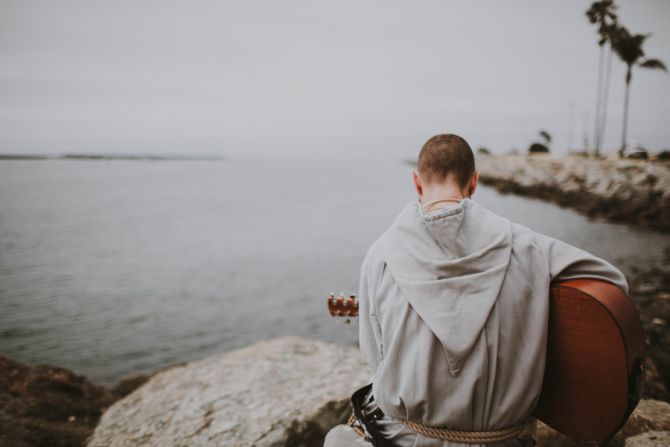 Musical inspiration can come from unexpected places - like a Franciscan friar's struggle to learn Spanish.

The inspiration for the title and theme of "Poco a Poco," a new CD from the Franciscan Friars of the Renewal, came from a friar living in Honduras, who worked at a hospital that serves the poorest of the poor.

Although he was having a hard time learning Spanish, the friar wanted to encourage people as they waited to for medical attention - some of whom had walked for miles to receive care - so he memorized a simple but encouraging phrase in Spanish: "Somos peregrinos caminamos al Señor; poco a poco, vamos al llegar," which translates to: "We are pilgrims walking to the Lord, little by little, we will arrive."

"It was just this little way of like encouraging people...little by little, step by step, I can get through another day," said another Franciscan, Fr. Mark-Mary, CFR, who heard the friar's phrase for the first time when he was also living and working in Honduras.

"But it ends with this hope of 'vamos a llegar', we're going to make it, our hope is in Christ and we do not hope in vain," he told CNA.

Fr. Mark-Mary shared the phrase and story with friend and fellow friar Br. Isaiah, CFR, who found that it resonated with him so personally that he chose "Poco a Poco" for the title of his first full-length musical album.

"Every time I heard it I just lit up because there was something about it that just grabbed my heart" Br. Isaiah said in a video about the CD for Ascension Press.

"Little by little, there's something about that that my heart just says ok yeah, I can handle that...its become a chorus for me when facing life's difficulties," he said. "It's become a rallying phrase for whatever the moment calls for."

The biblical theme of life as a pilgrimage journeying to the Lord, and with the Lord, is something that permeates the whole CD, Br. Isaiah said in email comments to CNA.

"The Book of Exodus recounts how God led Israel 'little by little' through the desert in their pilgrimage to the Promised Land and so He does with us," he said.

"'Poco a poco,' God guides us along our journey, encouraging the heart to set out each day to a land it knows not, by paths it has not known, all with the promised accompaniment of an ever-present and unwearied Love, capable of carrying us beyond the familiar lands of our habits and capacities to frontiers of growth, transformation, and ever-deepening peace as we come to behold the God of love, in the face of Christ Jesus, whose peace (and love for us) 'passes all understanding,'" he said.

The theme of life as pilgrimage also fits perfectly with the charism of the friars, as stated on their recently-received Pontifical Decree from Rome: "In imitation of St. Francis of Assisi, the friars seek to follow in the footsteps of Jesus, as a prophetic witness that life is a pilgrimage to the Father, of faith, hope and love of God and neighbor, made possible by the Holy Spirit."

The album is the fruit of prayer and brotherhood, said Fr. Mark-Mary, who is the CD's executive producer.

"There's this really popular line from St. Irenaeus, that 'the glory of God is man fully alive,' but man fully alive is man in communion," Fr. Mark-Mary said.

"There's something about this album that's the fruit of our Franciscan brotherhood, it's not the fruit of Brother Isaiah being a superstar, it's listening to one of our simple, older brother's prayer and the way he's speaking to the poor in Honduras, and then sharing that and putting my gifts at the service of Brother Isaiah, and Brother Isaiah receiving that gift," he said.

"This (album) wouldn't happen if it weren't for our Franciscan brotherhood, which we take very seriously, we're really proud of it," he said.

Using music as a way to evangelize is deeply embedded in the Franciscan charism, Fr. Mark-Mary noted, and goes all the way back to St. Francis of Assisi, who had a talented musical friend and follower.

"So St. Francis would have him come and play in the market square and he'd get people's attention, and then the musician would take a break and then they'd preach, so its very much a part of the Franciscan charism," he said.

It's also particularly a part of the CFR charism - one of the founding members of the order is the rapping Fr. Stan Fortuna (of 'Everybody Got 2 Suffer' fame), and many other musically talented brothers who have joined the order over the years.

The music adds, rather than detracts, from the friars' primary mission of serving the poor and evangelizing, Fr. Mark-Mary noted.

"I thought it was really beautiful that on the night when (the CD) was released, Br. Isaiah came down to our homeless shelter in the Bronx, and he's playing music and giving a word to the homeless in the shelter," he said.

"There's something beautiful about being able to do this but in a way that doesn't take us away from our first call."

Something else that Fr. Mark-Mary said he appreciated about being involved in the project was the opportunity to add something positive to the culture.

"I have a chance to lead the way again with some of the friars' work with media evangelization," he said.

"What it comes down to is that we're in a battle for minds, and so...how can we be speaking goodness into the world? Because so much of the culture these days...its not morally neutral, a lot of the stuff out there, it's really like poison."

But it's not enough to tell people "don't watch this, don't listen to that," Fr. Mark-Mary noted, there has to be something else to take its place.

"The full work is saying - watch this instead, listen to this instead. So we're trying to do that and finding that music is one way to get into people's personal cultures, to get on their phones get in their car radios," he said.

So far the album has been received very well, Fr. Mark-Mary said. It was at one point the fourth best-selling Christian album according to Amazon, and the number 23 best-selling album for all music on Amazon.

The album "Poco a Poco" is available on iTunes and Amazon, and CDs and merchandise can also be ordered through Ascension Press.

One of Fr. Mark-Mary's favorite parts of the experience has been watching the comments that people have made on a music video for one of the tracks, "Struggler", produced by Spirit Juice Productions and posted on Ascension Press' website.

"I think one of my favorite comments has been 'I regret underestimating this,'" Fr. Mark-Mary said.

He said he has found that people often expect "church stuff" to be mediocre or lower in quality, and he likes breaking those stereotypes.

"I'm very much committed to speaking a message in a way where the means doesn't undermine what you're trying to say."