Cardinal Edwin O’Brien, Grand Master of the Equestrian Order of the Holy Sepulchre, told journalists Wednesday that the order of knighthood is committed to providing good educational opportunities in the Holy Land to help Christians remain in their homeland.

“We don’t want the Holy Land to become a museum,” O’Brien said Nov. 7. He spoke in advance of the general assembly of the Equestrian Order of the Holy Sepulchre of Jerusalem, which will take place near the Vatican next week.

O’Brien said he believes education, at all levels, is one of the greatest contributions the order has made. Education offers stabilization by giving young people in the Holy Land the foundation for a better future, and by contributing to inter-religious dialogue and harmony, since both Christians and Muslims attend order-funded schools, he noted.

The order provides around 80 percent of the total operating budget of the Latin Patriarchate of Jerusalem, supporting around 68 parishes, 44 schools, and 90,000 Christians in Jordan, Palestine, Israel and Cyprus.

This aid is coordinated through the governing body of the Order of the Holy Sepulchre, called the Grand Magisterium.

O’Brien told EWTN Nov. 7 the order has seen success in the cooperation among Christians and between Christians and Muslims in the area of the patriarchate.

“The effective role that we play is in dialogue,” he said, “but especially in education, because for many [Christians in the Holy Land] there are no real solid education opportunities.” The order provides education for Christians “no matter what they can do to pay,” he said.

The order’s members “are committed to doing whatever’s necessary to advance the pastoral, educational, and humanitarian needs of Christians and others in Palestine, West Bank, Jordan, and Israel,” he said.

“And I think we very effectively do that... People depend on the help that they receive from us because there’s very little else to look for.”

The “consulta,” as next week’s general assembly is called, takes place every five years and brings together a portion of the estimated 30,000 knights and dames of the order to discuss future projects and the mission of the order.

Members come from 40 countries and make both a spiritual and financial commitment of support of the Church in the Holy Land, particularly the Latin Patriarchate of Jerusalem.

O’Brien told EWTN that a part of the assembly will be to hear from members “what their local needs are, and to respond to them.”

“It’s very important that we know whom we’re serving and what they’re accomplishing in their various lieutenancies, and that they coordinate and collaborate together, and in and through us, to make our members’ charity and generosity more effective,” he said.

Traffic stopped this weekend on the busy Roman streets as police escorts guided 31 coach buses of pilgrims through the narrow city roads. 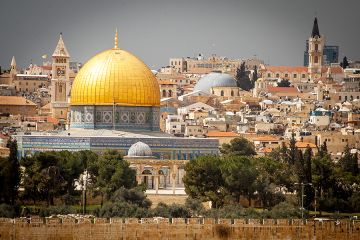