Tyler bishop: Our main job is to focus on salvation of souls 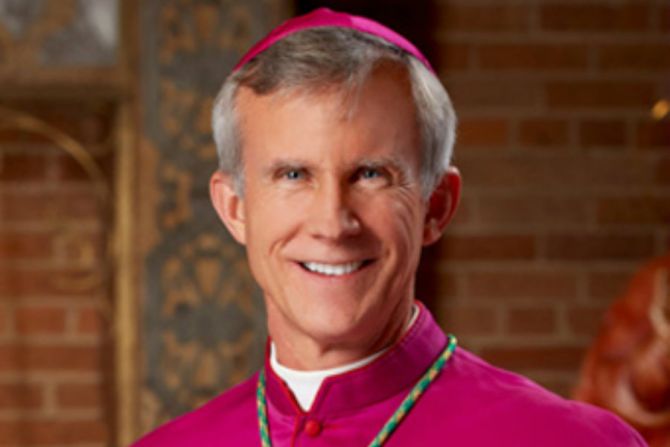 About three months after calling for an investigation into the claims made by former Apostolic Nuncio Carlo Vigano, Bishop Joseph Strickland of Tyler, Texas is not confident that the Vatican will ever properly investigate allegations outlined in the nuncio's August letter.

In an interview with CNA on Monday at the USCCB's Fall General Assembly in Baltimore, Md., Strickland also expressed concerns that bishops of late have strayed from their "basic mission" as the shepherd of souls.

Vigano, former nuncio to the U.S., released a testimony in August which claimed that Pope Francis had removed restrictions on Archbishop Theodore McCarrick that had been imposed by Pope Emeritus Benedict XVI.

McCarrick resigned from the College of Cardinals in July of this year, following a series of public allegations against him concerning the sexual abuse of minors, seminarians, and priests. The dioceses of Newark and Metuchen subsequently confirmed they had previously reached two out-of-court-settlements with adult accusers.

Regarding the Vatican's pledge to investigate Vigano's various claims, Strickland told CNA he is concerned that the investigation is going far too slowly.

"I've worked in the tribunal for years, I've studied canon law," he said. "We used to always say working in the tribunal, 'justice delayed is justice denied,' so that's my thought. It's just taking too long."

Strickland told CNA that he is not entirely sure what was causing this delay, but he did acknowledge that Americans are generally accustomed to investigations happening quickly, while Europeans often have a more relaxed mindset.

When asked if he believed anything could be done to get Rome to speed up the investigation, Strickland was skeptical. He told CNA that while he accepts that it is up to Rome to deal with Archbishop Theodore McCarrick, he believes that the Church in the United States should do its own investigation into his alleged crimes and learn from what they uncover.

"There's got to be files. He's an American. I mean, his whole priesthood has been in the United States," said Strickland.

"I would say, let's help Rome, and have our own investigation, and do what we can. Certainly, we can."

The delay in the investigation into McCarrick is a sign of deeper issues within the Church, Strickland said. He told CNA that he was "disappointed" thus far with how things have been handled. He described the lack of a proper investigation as an "illustration that the same machinery that caused the whole McCarrick mess, still functions--or doesn't."

"It's that same kind of machine that allowed him to move through the ranks doing all this stuff and just sort of side-tracking the moral issues," he said. He blamed this "machine" for slowing down the investigation into uncovering what exactly McCarrick did.

The Vigano letter, he said, has "sort of pulled the curtain back" on deeper issues within the Church--namely, moral decay amongst the clergy and the Church as a whole.

Strickland said he believes the issues regarding McCarrick, Vigano, and the lack of any real investigation into either can be traced to what he describes as a drifting away from the main job of a bishop: a need to promote the salvation of souls.

"We need to worry about the salvation of Theodore McCarrick's soul, as bishops," he said.

"We need to be focused on the salvation of the victims and the abusers. That, to me, is the core issue."

Strickland pointed to the events of the past summer, primarily the reaction to what he called the "Vigano question," as proof that this primary concern has fallen out of focus among some of his brother bishops.

"All of what's happened this summer. It's 'Oh, well, we've got to worry about global warming.' That's not our job," he said, in an apparent reference to comments made by Cardinal Blase Cupich of Chicago. In August, Cupich dismissed the nuncio's allegations as a "rabbit hole", saying Pope Francis has a "bigger agenda" to worry about, including defending migrants and protecting the environment.

Strickland said that there is certainly a need for "good people, good laity," working on various issues such as global warming, immigration, and general injustices in the world, noting that he's on the board of a Catholic charity.

But he expressed concern that an overemphasis on these kinds of works is serving as a distraction from the ultimate call of a bishop: bringing people to holiness, promoting the sanctity of life, and "living the virtues."

"I think we've got it flipped," he said. "As bishops, our first job is the holiness of the people of God. The salvation of souls."

In every situation he encounters as a bishop, Strickland said, he tries to consider how his actions may affect the salvation of souls.

Looking ahead to the future of the Church, Bishop Strickland said he believes there needs to be increased accountability among bishops, improvements in teaching the various facets of the faith - especially in terms of sexuality - continued state investigations into abuse, and reforms to ensure that seminarians will be protected throughout the formation process.

"We need to make sure that seminarians are not victimized," he said, adding that a man who is called to seminary should not be at risk of "having his life destroyed by the people who are supposed to be forming him for the priesthood."

One area where Strickland expressed confidence was in regards to the Charter for the Protection of Children and Young People. Although he said there are loopholes that need to be tightened, he is "fairly confident" that the appropriate steps to "revamp and strengthen" the charter will be taken.

As a bishop, however, there are responsibilities that go along with his roles as a spiritual father and shepherd to a diocese, he told CNA. He cannot "just sit in a corner and go and pray" - during times of controversy and upheaval, he has to prioritize what he does first.

"And sheep are bleeding, and getting slaughtered, and wolves are attacking. We can't be worried about what color we're going to paint the barn...Deal with the most important (things) first, then get others to figure out the barn."