Founder of the pro-abortion campaign "Shout Your Abortion", Amelia Bonow was featured in a recent kids' YouTube video to talk abortion with adolescents, telling them that life begins when they decide it does and that abortion is "part of God's plan."

The video, entitled "Kids Meet Someone Who's Had an Abortion," was published by Seattle-based company HiHo kids, and is a part of a series of videos called "Kids Meet." Other videos in the series include kids meeting a ventriloquist, a deaf person, a Holocaust survivor, a gender non-conforming person, and a gynecologist, among others.

"Shout Your Abortion" (SYA), the organization founded by Bonow, has as its mission the normalization and celebration of abortion as an act of female empowerment.

"We're in a fight for our lives, and it's time to tell the truth. Every single day, all sorts of people have abortions, for every reason you can imagine. We are your siblings, your coworkers, your spouses and your friends. Abortion helps people live their best lives. We are the proof. And we're only going to get louder," the organization's website states.

In the "Kids Meet" video featuring Bonow, she answers the questions of the kids, who appear to be middle-school aged, about the abortion she procured, which spurred her to found SYA. She also questions the kids about their own views - about what they think abortion is, their opinion on abortion, and even their religious and moral views.

"Do you think that sometimes it's not ok to have an abortion?" Bonow asked one of the boys in the video.

"I want to say if you're being reckless, if there's nothing wrong going on…" he replied.

"I don't know, I just don't agree," Bonow said. "Do we want people to just have all those babies?"

When the boy responds that unwanted babies could be put up for adoption, Bonow argues that that would still be forcing women to "create life."

"I feel like if I am forced to create life, I have lost the right to my own life," she said. "I should be the one to decide if my body creates life. Even if you give a kid up for adoption, you still like have a kid out there somewhere, you know?"

Bonow also questions several of the kids in the video about their religious views. When one girl identifies as Catholic, Bonow questions her whether she knows what the Catholic Church teaches about abortion.

"I don't think the Church liked it. Because they see it as like, killing the baby," the girl responds.

Bonow then asks her and another girl what their personal opinions are.

"I think it's up to you," one of the girls responds. "Same," says the girl who identified as Catholic.

"I feel supported by that," Bonow replies, smiling.

Bonow then asks a boy in the video whether he believes in God. When he says he does, she asks him what he thinks God would think about abortion.

"If I were to say, I think he's ok with it because there's still babies being born," he answers hesitantly. "What do you think God thinks about abortion?"

"I think it's all part of God's plan," Bonow responds. "I really was just thinking about Drake when I said that," she adds.

A few of the kids in the video asked Bonow why she had the abortion, and whether she and her partner had used a condom or contraception to try to prevent pregnancy.

"He wasn't wearing a condom," Bonow said, because it seemed "easier at the time."

When asked what the abortion was like, Bonow compared it to "a crappy dentist appointment or something."

"You go to the doctor and they put this little straw inside of your cervix and inside of your uterus. And then they just suck the pregnancy out," she said. "It was like a body thing that's kind of uncomfortable, but then it was over and I felt really just grateful that I wasn't pregnant anymore."

The content of the video, released Dec. 28, garnered so much negative attention that the comments for the video on YouTube have been disabled.

Kristi Hamrick, a spokesperson for pro-life group Students for Life of America, told CNA that the video lies to children about the weight of the decision of having an abortion.

"It's clear that when an abortion takes place, there's a tragedy that affects both woman and child," she said.

"And to pretend otherwise, and to tell children that it's an irrelevant, insignificant choice is the largest lie of abortion, because so many people understand that no matter how you feel about it, it is an unchangeable thing that you have done," she said.

Hamrick added that she thought it was unfortunate that the video expended effort on justifying abortion to children, rather than trying to teach them how to make good choices.

"To go to kids and say I want to help you feel comfortable with what is an unchangeable and terrible choice, why would we do that?" Hamrick said. "Why wouldn't we talk about children what is best, what is aspirational, about their hope and future?"

Georgette Forney is an Anglican deacon, the president of Anglicans for Life, and co-founder of the Silent No More Awareness Campaign, whose mission is to give a voice and platform to women who regret their abortions.

Forney told CNA in e-mail comments that she thought the video should be called "Kids Meet Abortion Propaganda."

"...when I looked into the organization producing the series – I realized it was indeed an organization pumping out 'content' for kids that features a liberal agenda," she said.

She said the video with Bowon is "disingenuous and not representational of women who have abortions," many of whom have deep regrets.

She said she attempted to reach out to the group to suggest that they make an alternative video, where kids talk with women who regret their abortions, but could not find any contact information.

"Guess they don't want to hear from people but do want to decide what kids should hear!" she said.

Mallory Quigley, a spokesperson for pro-life group Susan B. Anthony List, which advocates for pro-life politicians, told CNA that she thought it was sad that Bowon felt the need to use children to justify her decision.

"It's sad that she felt the need to justify the choice to end a life, and to bully kids into supporting her decision," she said. "People who are comfortable with their decisions don't usually take that step."

She added that she thought the video was an act of "desperation" on the part of the "abortion lobby."

"They see that life is winning, that a majority of young people are pro-life," she said. "This is sort of a desperate attempt to try out what's really old and tired language at this point on the next generation. And I think that it reveals a lot of the flaws in their arguments and the subjectivity of it all."

D. C. McAllister, writing for P.J. Media, wrote that the video was "creepy" and "targets children."

"Notice how she dehumanizes the baby, the life inside of her. She also fails to tell the children about the physical risks to the mother. She ignores the pain women suffer and the long-term adverse effects. She skips over the emotional toll having an abortion takes on most women," McAllister wrote.

"She doesn't describe what happens to the baby - how it's chemically burned, how it feels pain. How it is cut up into pieces. Little arms, legs, and torsos. Planned Parenthood has plenty of pictures she could have provided, but no, she tells these kids it's a simple procedure - and you'll be so grateful afterwards."

Nathan Apodaca, writing for life advocacy group Human Defense, deconstructs the arguments made for abortion in the video, which he said "simply helps confirm many of the biases that people have against those who oppose abortion, through lazy dismissals, bad arguments, ad hominem insults, and snarky political posturing."

"The '#SHOUTYOURABORTION' movement may be holding the hearts of many at the moment through tearful and heart wrenching stories, but it is instead the desperate plea of a movement which has broken tens of millions of men and women and helped slaughter tens of millions of little children who never got to see the light of day or feel the warm embrace of those who loved them," he wrote.

Bonow posted the video on her Twitter, and announced that her group was also working on a children's book: "I let a bunch of kids grill me about my abortion and it was great. #ShoutYourAbortion will be releasing a children's book about abortion in 2020!"

But the 2,200-plus comments on her post were overwhelmingly against the video.

"I notice not one child was filmed who rejected her position," Twitter user MamaD said.

"I watched this. No information given such as facts of embryonic developmen [sic] & what abortion procedures at various trimesters actually entail. No, it's platitudes & emotional appeals; of course kids will tell you it's ok and sadly so will many adults. Abortion is a grave injustice," Twitter user Jenny S. commented.

Several commenters on Twitter and Facebook recommended that the "Kids Meet" series also expose children to someone who has survived abortion, such as Gianna Jessen, a pro-life speaker and advocate who survived a late-term saline abortion at 7 months, and has cerebral palsy as a result.

Jessen herself responded to the video on Twitter: "as someone who was actually born in an abortion clinic, resulting in cerebral palsy, and being a woman-i would Love to give these kids another perspective. the baby's perspective-what were my rights?" 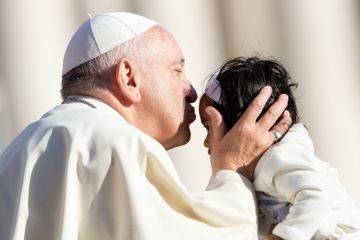 In his general audience Wednesday, Pope Francis said that abortion “suppresses innocent and helpless life in its blossoming.” “Is it right to take a human life to solve a problem? It's like hiring a hitman,” Pope Francis said in St. Peter’s Square Oct. 10, in a departure from his prepared remarks. In the first day of the new congressional session, the House of Representatives passed a spending bill that includes a provision to repeal a pro-life policy. Survey asks women what they needed instead of abortion

Women have spoken about their personal experiences of abortion and the lack of resources and support which led them to the tragic decision.