What is Opus Dei? A CNA Explainer 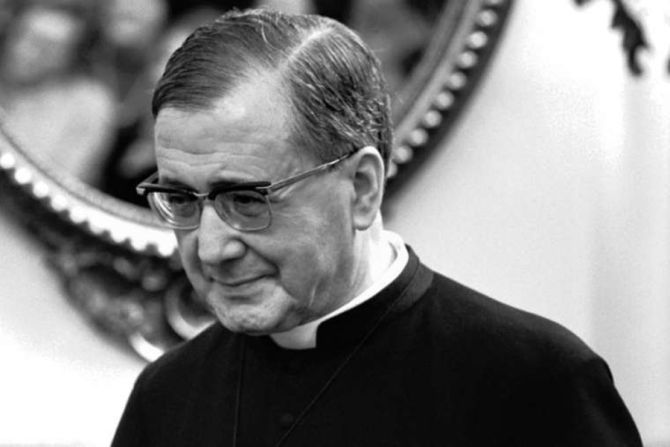 Opus Dei confirmed this week that in 2005 it reached a $977,000 settlement with a Washington, D.C. woman who alleged that Opus Dei priest Fr. C. John McCloskey sexually assaulted her in the context of pastoral counseling.

The story has made headlines because of McCloskey's connection to political and media circles in Washington, D.C. But it has also gained attention because of the place Opus Dei has occupied in popular culture, especially after the publication of the 2003 novel "The Da Vinci Code," which offered a portrayal of Opus Dei many critics dismissed as fantastical.

But what is Opus Dei?

Founded in 1928 by Spanish priest Fr. Josemaria Escriva, the movement was borne of Escriva's vision to help lay Catholics understand the baptismal calling of holiness and evangelization. The priest desired to demonstrate that all Catholics are called by God to become saints, and to develop programs of Catholic formation to assist them in his mission.

He called the organization Opus Dei to emphasize his belief that its foundation was a "work of God,"- or, in Latin, "Opus Dei."

The organization began as a program of Catholic spiritual and intellectual formation for laymen, and began admitting women to its programs of formation two years after its foundation.

Technically, Opus Dei is a "personal prelature," which, canon law says, is a Church structure which "consists of presbyters and deacons of the secular clergy" joined together to "accomplish particular pastoral or missionary works," according to canon law. The priests and deacons of the prelature are not members of a religious order, like the Jesuits or Benedictines, and therefore, they do not make public vows of poverty, chastity, and obedience, as religious priests and brothers do. Instead, they are secular clerics, as are diocesan priests, which means that like diocesan priests, they are obliged to celibacy and to obedience, but they are not bound to poverty, or to other aspects of monastic, or religious life.

Opus Dei's work and structure also involves lay Catholics, who associate themselves to the mission of the prelature by means of individual agreements, as defined by the organization's statutes, or governing documents. In fact, the majority of those involved in the work and mission of Opus Dei are lay people.

Lay association comes at different levels: some unmarried Catholics collaborate with Opus Dei as "numeraries," who dedicate much of their life and time to Opus Dei and its mission; "supernumeraries" are typically married, and share in Opus Dei's work and mission in the context of their families; "associates" are celibate collaborators who do not reside in Opus Dei centers; "cooperators" may be married or unmarried laity who collaborate with or support Opus Dei at a less committed level. There are also diocesan priests and bishops associated with Opus Dei through an organization called the Priestly Society of the Holy Cross.

While they are formally connected to the prelature, numeraries, supernumeraries, and cooperators remain subject to the jurisdiction of their own diocesan bishops and pastors. The prelate, or head, of Opus Dei does not exercise ecclesiastical jurisdiction for those collaborators, except in regard to specifically delineated matters related to collaboration in the prelature's mission. The educational and spiritual work of Opus Dei, including formation, is subject to the oversight of the diocesan bishop in each place where the prelature operates.

In 2016, there were more than 2,000 priests and more than 90,000 lay people directly affiliated with Opus Dei. The prelature is operative in nearly 70 countries, and headquartered in Rome.

Opus Dei has been criticized by some observers, who say the organization in inconsistent in its practices in different regions, promotes secrecy about its practices and governance, and focuses its recruiting on persons of wealth or influence.

Opus Dei's spirituality is rooted in the writings and thought of Fr. Josemaria Escriva, who was canonized by Pope St. John Paul II in 2002. Escriva's work focused on becoming holy in ordinary life, by means of a deep prayer life, offering to God sacrifices and challenges, and the cultivation of virtue. Opus Dei announced Monday that it had paid a settlement following accusations of misconduct against a priest of the society made in 2002.