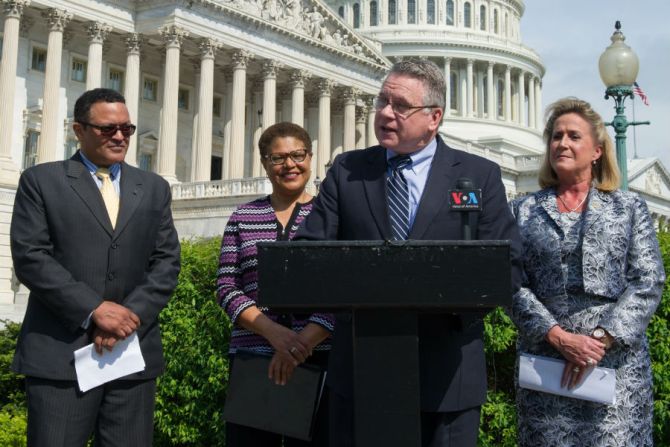 The law, which was authored by Rep. Chris Smith (R-NJ), authorizes $430 million to be spent over the next four years to help combat sex and labor trafficking both in the United States and abroad. This is Smith's fifth anti-trafficking bill to become law.

"In the fight to end modern day slavery, my law honors the extraordinary legacy of one of the greatest Americans who ever lived," Smith said of Frederick Douglass, a former slave who became a prominent abolitionist after being freed.

The law provides resources for trafficking prevention education for children; shelter, therapies, and reintegration assistance for trafficking survivors; the facilitation of trafficking-free supply chains in the United States; training of government officials as well as airline industry employees to identify trafficking cases; and oversight to ensure that government purchases are not employing traffickers.

The bulk of the allocations will go to the State Department to fund their educational and diplomatic efforts against trafficking.

The new legislation provides funding to the International Megan's Law, which was also authored by Smith.

The International Megan's Law, which was named in memory of Megan Kanka, a 7-year-old who was murdered in 1994 by a convicted pedophile, establishes country-to-country notification about convicted pedophiles who may be traveling to an area for the purposes of sex trafficking or child exploitation.

Since the International Megan's Law was enacted in February 2016, nearly 3,500 convicted pedophiles have been denied entry to a country. This new bill allocates $18 million in funding to the Department of Justice, Department of State, and the Department of Homeland Security spread over three years.

A recent United Nation Office of Drugs and Crime (UNODC) report found that there has been an increase in the number of trafficking victims, particularly girls, over the last decade. The total number of people detected as victims of trafficking has increased 40 percent since 2011, but the UN says that this could be due to improvements in detection.