"We should always aim high to offer God the best and the most beautiful music of which we are capable," Archbishop Sample said. Mass requires an "art of celebrating" in which perhaps nothing is more important than the place of sacred music.

The archbishop's pastoral letter, "Sing to the Lord a New Song", was dated Jan. 25, the feast of the Conversion of St. Paul. Sample voiced hope the letter will be well received in the archdiocese and help advance "an authentic renewal of the Sacred Liturgy according to the teaching of the Second Vatican Council and the mind of the Church."

Sacred music has a twofold purpose: "the glory of God and the sanctification of the faithful." This has serious implications for its place in divine worship.

Sample's pastoral letter traces teachings about sacred music from various popes and councils of the Church.

Benedict XVI said that the Church has created, and still creates "music and songs which represent a rich patrimony of faith and love." This heritage "must not be lost."

Pope Francis, too, has lamented "a certain mediocrity, superficiality and banality" in liturgical celebrations that acts to the detriment of their "beauty and intensity."

According to Sample, there are "serious challenges in our own day" for efforts to seek to renew the liturgy "in a way that respects, fosters and promotes the true nature of the Mass itself."

He criticized the reduction of music selection at Mass to "a matter of subjective 'taste'." Liturgical music is not simply "an addendum to worship" or something external added on to the form and structure of Mass.

"Rather, sacred music is an essential element of worship itself," he said. "It is an art form which takes its life and purpose from the Sacred Liturgy and is part of its very structure."

Because sacred music is so essential, Catholics must reject the common idea that four songs can be chosen and "tacked on." Sacred music's role is "to help us sing and pray the texts of the Mass itself, not just ornament it."

Quoting St. Pius X, Sample said sacred music must "exclude all profanity not only in itself, but in the manner in which it is presented by those who execute it." The documents of the Second Vatican Council say sacred music is more holy the more closely connected it is with the liturgical action, "whether it adds delight to prayer, fosters unity of minds, or confers greater solemnity upon the sacred rites."

Everything associated with the Mass must be beautiful, to reflect "the infinite beauty and goodness of the God we worship." Pope Francis has said liturgical and sacred music can be "a powerful instrument of evangelization, because it gives people a glimpse of the beauty of heaven."

Sample explained that universality in music means "any composition of sacred music, even one which reflects the unique culture of a particular region, would still be easily recognized as having a sacred character." Holiness is "a universal principle that transcends culture."

There is a lack of understanding and confusion about what music is proper to Mass, the archbishop said, adding, "not every form or style of music is capable of being rendered suitable." A Gloria set in a polka beat or in a rock music style is not sacred music, because these styles, however delightful in a dance hall or concert setting, do not have the qualities of sanctity, beauty and universality proper to sacred music.

While all forms of genuine sacred music have spiritual and emotional impact, there is "a necessary divide" between sacred music and "what generally we call entertainment."

Sample reflected on the treasury of sacred music. Gregorian chant should enjoy a "pride of place" in the Roman liturgy, according to the Second Vatican Council, and the faithful should be led to sing in Gregorian chant as far as is proper as a way to participate in the liturgy.

Sample acknowledged that Gregorian chant does not presently enjoy pride of place; it is rarely if ever heard. He said this situation must be addressed with "great effort and serious catechesis" to help it more widely become a normal part of the Mass.

Other forms of sacred music which accord with the spirit of the liturgy are not excluded, especially polyphony. Sample cited composers such as Palestrina, Victoria, Tallis, and Allegri.

His general guidelines include an explanation of the right understanding of "active participation" in the liturgy.

He said that "popular" sacred music doesn't mean the music of pop culture, but rather "forms of sacred music suited to the musical abilities of the people."

Sacred music is native not only to Europe but draws on organic developments among other peoples who are part of the Latin rite. Music that is truly "sacred" in their cultures deserves due consideration to help adapt worship and to help form their attitudes towards religion.

He criticized as erroneous the idea that lyrics alone determine whether a song is sacred or secular.

He praised musicians who worked hard to accomplish the goals of the Second Vatican Council. At the same time, he said much of his letter may contravene their musical formation.

This contradiction should not be interpreted as criticism of "those dedicated church musicians who have offered their service with a generous heart and with good will."

Musicians and music directors should have opportunities for ongoing education and liturgical formation. Musicians bear much of the responsibility for bringing beauty to liturgical celebrations. Pastors should encourage them to "aspire to the highest levels of beauty in sacred music" and musicians should be sure to practice, rehearse, and prepare their contributions to worship.

Sample says sacred music directors deserve "just compensation" for their time, skills, experience and training. The renewal of liturgical music includes "a solid musical education for clergy and laity." He encouraged church musicians to join or form associations "committed to an authentic implementation" of the Church's instructions on sacred liturgy and sacred music.

Even parishes and missions without a large talent pool and other resources should work to provide sacred music that fits best with their abilities.

Pre-recorded music may not substitute for actual musicians. At the same time, music serves the needs of the liturgy, it does not dominate. Music "should not seek to entertain or draw attention to itself or the musicians."

The location and self-presentation of musicians in the church building is also important to consider. They and their instruments should never be located in the sanctuary, except for cantors and psalmists at the appropriate time. Where musicians are visible, they should strive not to draw attention to themselves.

Bishops and their cathedral parishes have a special duty to ensure archdiocesan liturgies are "exemplary" in adhering to musical norms. Musical standards should have their fullest practice at the Chrism Mass, ordinations, and other liturgies the archbishop celebrates with the clergy and the lay faithful.

Sample's pastoral letter considers many other aspects, from church acoustics to the importance of silence.

"Silence in the liturgy allows the community to reflect on what it has heard and experienced, and to open its heart to the mystery celebrated," he said.

Every parish should have a sung Mass every Sunday, offered "with consistency and with the greatest care and attention the community can give it," the archbishop said.

The pipe organ should have "pride of place" as the instrument "most in harmony with the spirit of the Roman liturgy." Despite its diminished use, Catholics must be willing to invest for the future. The archbishop encouraged all parishes to include the pipe organ in their repertoire.

Other musical instruments must truly contribute to the beauty and sanctity of the Mass. Instruments like electric guitars "are not suitable for accompaniment at Holy Mass," and the rock drummer set is "never appropriate."

Sample entrusted the effort to improve sacred music to St. Cecilia, the patroness of church musicians, and the Blessed Virgin Mary, Immaculately Conceived.

"May the renewal and reform of sacred music in the Archdiocese of Portland lead us together to a beautiful and worthy celebration of the sacred mysteries of the Holy Mass, for the glory of God and the sanctification of all the faithful," he said.

As Bishop of Marquette, Sample wrote a 2013 pastoral letter "Rejoice in the Lord Always" on sacred music. He said he thought the previous letter promoted "universal and enduring" values and ideas that are "as valid today as they were then." 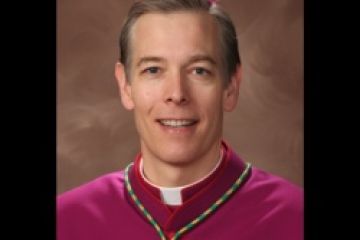 Sacred music is “integral” to the Catholic Church's liturgy, Bishop Alexander K. Sample said in a Feb. 13 pastoral letter to the people of the Diocese of Marquette.

On Saturday, Archbishop Alexander Sample of Portland, Oregon celebrated a Mass for marriage, after calling for new marriage initiatives in his archdiocese last fall. Pope Francis: Education is key to the renewal of sacred music

Pope Francis said Saturday that while liturgical music has often struggled to live up to the quality and beauty the mystery of the Eucharist requires, we can promote its renewal by investing in a solid musical education for clergy and laity.