Pope Francis addresses participants in the plenary assembly of the Congregation for Divine Worship in the auletta of the Vatican's Paul VI Hall, Feb. 14, 2019. | Vatican Media.

The liturgy, Pope Francis said Thursday, cannot be reduced to a matter of taste, becoming the subject of ideological polarization, because it is a primary way Catholics encounter the Lord.

There is a risk with the liturgy of falling into a "past that no longer exists or of escaping into a presumed future," the pope told members of the Congregation for Divine Worship and the Discipline of the Sacraments Feb. 14.

"The starting point is instead to recognize the reality of the sacred liturgy, a living treasure that cannot be reduced to styles, recipes and trends, but should be welcomed with docility and promoted with love, as irreplaceable nourishment for the organic growth of the People of God," he continued.

Francis also emphasized that the liturgy is not a "do-it-yourself" zone and urged the Vatican officials, "as in other areas of ecclesial life," to avoid "ideological polarizations" and an attitude of "perpetual dialectics" against those with differing ideas about the liturgy.

He also recalled his statement in Evangelii gaudium "that reality is more important than the idea."

"When we look back to nostalgic past tendencies or wish to impose them again, there is the risk of placing the part before the whole, the 'I' before the People of God, the abstract before the concrete, ideology before communion and, fundamentally, the worldly before the spiritual," Francis asserted.

Meeting the congregation during their Feb. 12-15 plenary assembly, Pope Francis addressed the importance of the Church's liturgy, of having good collaboration between the Vatican congregation and bishops' conferences, and of developing a proper liturgical sense in Catholics.

"The liturgy is in fact the main road through which Christian life passes through every phase of its growth," Francis said. "You therefore have before you a great and beautiful task: to work so that the People of God rediscovers the beauty of meeting the Lord in the celebration of his mysteries."

The pope noted that the plenary falls 50 years since St. Paul VI reorganized Congregation for the Discipline of the Sacraments "in order to give shape to the renewal desired by the Second Vatican Council. It was a matter of publishing the liturgical books according to the criteria and decisions of the Council Fathers, with a view to fostering, in the People of God, 'active, conscious and pious' participation in the mysteries of Christ."

He asserted that "the praying tradition of the Church needed renewed expressions, without losing anything of its millennial wealth, even rediscovering the treasures of its origins," and noted that it was also in 1969 that the General Roman Calendar was changed and the new Roman Missal was promulgated, calling them "the first steps of a journey, to be continued with wise constancy."

Francis added that "it it is not enough to change the liturgical books to improve the quality of the liturgy."

He argued that proper liturgical formation of both clergy and laity is fundamental, and quoted from Sacrosanctum Concilium, the Second Vatican Council's 1963 constitution on the sacred liturgy.

Though necessary, just providing information about liturgical books is not an adequate liturgical education, he continued, even with a view toward preserving the dutiful fulfillment of the ritual disciplines.

"In order for the liturgy to fulfill its formative and transforming function, it is necessary that pastors and the laity be brought to grasp its meaning and symbolic language, including art, song and music at the service of the celebrated mystery, even silence," he stated.

He pointed to mystagogy as a suitable way to enter into the mystery of the liturgy, "in the living encounter with the crucified and risen Lord"; he pointed to the Catechism of the Catholic Church as an example of a book that illustrates the liturgy in this manner.

Referencing the title of the congregation's plenary assembly, "the liturgical formation of the People of God," he said the task awaiting them is "essentially that of spreading the splendor of the living mystery of the Lord, manifested in the liturgy, in the People of God."

"To speak of the liturgical formation of the People of God means first of all to become aware of the irreplaceable role that the liturgy plays in the Church and for the Church," he stated.

"And then concretely help the People of God to better internalize the prayer of the Church, to love it as an experience of meeting with the Lord and with the brothers and, in light of this, to rediscover its contents and observe its rites." 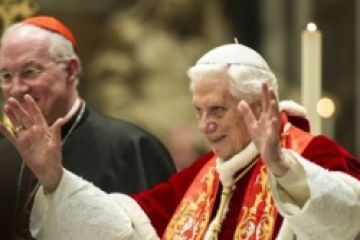 The Congregation for Divine Worship, in a recent circular letter, announced that the placement of the sign of peace within Mass will not change, though it suggested several ways the rite could be performed with greater dignity.