The Church needs to establish a new rules and standards for the accountability of bishops regarding sex abuse and its mishandling, the Archbishop of Chicago said Friday at the Vatican.

"We must move to establish robust laws and structures regarding the accountability of bishops precisely to supply with a new soul the institutional reality of the Church's discipline on sexual abuse," Cardinal Blase Cupich said Feb. 22.

In his speech at the Meeting of the Presidents of the Bishops' Conferences on Safeguarding of Minors,  Cupich stated that the Church needs to assume the role of a loving mother to her children in working to end the sexual abuse crisis, and how acting in a synodal, collegiate manner will result in much good.

Cupich laid out what he believes will be an effective framework for his brother bishops, with an increased number of responsibilities for metropolitan archbishops, to ensure accountability in combating the crisis of sexual abuse in the Church.

"My aim is to offer a framework that is in keeping with our ecclesiological and canonical traditions in order to spark conversations among ourselves, knowing that there are differences in culture, civil and canonical laws and other factors that need to be considered," said Cupich, who added that he felt as though "decisive action" needed to be taken "without delay."

Cupich said he believes each episcopal conference, province, or diocese should "collegially establish" a standard for the investigation of a bishop for potential misconduct or cover-up, and that the process of creating these standards should involve both lay experts and the use of a metropolitan archbishop.

"All mechanisms for reporting allegations of abuse or mishandling of abuse cases against a bishop should be transparent and well-known to the faithful," said Cupich, adding that a direct line of contact to report abuse allegations to either an apostolic nuncio or metropolitan should be established.

The cardinal said he thought it would be useful for episcopal conferences to adopt a set of procedural steps that would both mesh with the traditions of the Church, and also "fulfill modern needs" for the identification and investigation of misconduct by bishops.

These procedures and norms need to include compassion for those who report abuse and their families, which includes providing access to counseling and other support at the expense of the diocese, as well as all reports of offenses being made public. A person who reports abuse should not fear any sort of discrimination or retaliation for their report, said Cupich, and he suggested that "due attention" be given to the involvement of laypersons who are experts in the process.

"After the metropolitan receives authorization, he should gather all relevant information expeditiously, in collaboration with lay experts, to ensure the professional and rapid execution of the investigation," which Cupich advised should be concluded promptly. A common fund could be established at different levels in order to pay for these new investigation techniques, said Cupich.

After the investigation, Cupich said the metropolitan archbishop would forward all information gathered to the Holy See, where the pope would then proceed to make a final decision in the ensuing penal process.

These new frameworks will require "steadfast trust and openness in identifying with the aid of everyone in the Church, and with due regard for the diverse cultures and the universality of our Church."

In order for these changes to happen, Cupich said, the bishops need to adopt what he termed a "synodal vision" that is "rooted in discernment, conversion and reform at every level." The Church, he explained, has a sacred bond with her members, much like the bond between a parent and child.

"The Church must truly be Pieta; broken in suffering, consoling in enveloping love, constant in pointing to the divine tenderness of God amidst the pangs of desolation in those who have been crushed by clergy abuse." 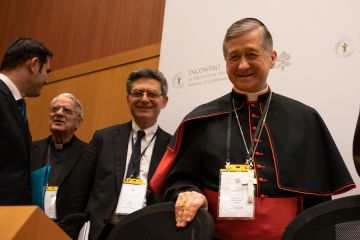 Analysis: In spite of itself, Vatican abuse summit may still do some good

The Vatican’s abuse summit this week will not solve the problems plaguing the Catholic Church in the U.S. In fact, it doesn’t aim to. Cardinal Blase Cupich of Chicago has denied collaborating with Cardinal Donald Wuerl on a proposal for handling misconduct complaints against bishops. The plan was formally presented during the U.S. bishops’ conference General Assembly in Baltimore last week, as an alternative to draft measures that had previously presented by conference leadership. Cardinal Blase Cupich said Monday that this week’s Vatican sex abuse summit needs to be focused on the protection of minors, underscoring that homosexuality is not a cause of sexual abuse.