Federal legislation purporting to guarantee equality explicitly rejects religious freedom protections and would open the gates to anti-discrimination lawsuits against religious believers and institutions who disagree with the bill’s broad view of LGBT discrimination, critics said.

Kristen Waggoner, senior vice president of Alliance Defending Freedom's U.S. legal division, said the proposed Equality Act, reintroduced into the House of Representatives on March 13, would undermine “the fundamental freedoms of speech, religion, and conscience that the First Amendment guarantees for every citizen.”

She said “disagreement on important matters such as marriage and human sexuality is not discrimination.”

Waggoner compared it to similar state and local laws that would “force Americans to participate in events and speak messages that violate their core beliefs.”

About 20 states have such legislation. Besides combating mistreatment of self-identified LGBT persons, they have been invoked to shut down Catholic adoption agencies that only place children with a mother and a father or to compel people working in the wedding industry, like florists, photographers and bakers, to provide their services for same-sex ceremonies.

Critics have argued that the concepts of sexual orientation and gender identity are too broad and will lead to rejecting appropriate recognition of difference between the sexes or differences between married heterosexual couples and other couples.

The legislation could endanger religious protections, particularly for those who believe marriage to be the union of one man and one woman. While U.S. law has historically allowed for broad religious freedom protections, those who disagree with same-sex marriage could be viewed as “discriminating” against a same-sex couple.

Though the 1993 federal Religious Freedom Restoration Act (RFRA) passed with overwhelming support, such protections have recently drawn strong opposition from some lawmakers, pro-abortion access groups and LGBT advocates who contend they interfere with basic rights.

As drafted, the Equality Act explicitly removes the ability under RFRA to cite religious freedom as a defense against discrimination claims.

“There would be an effort to punitively sue them into oblivion,” he said.

The American Civil Liberties Union, a backer of the bill, said the legislation “clarifies that the Religious Freedom Restoration Act cannot be used in civil rights contexts, prohibiting religious liberty — which is a core American value — from being used as a license to discriminate.”

The ACLU has long opposed Catholic hospitals that act according to Catholic ethics and refuse to provide “reproductive health” services including abortion and sterilization. In California, the legal group filed a lawsuit against a Catholic hospital for refusing an elective hysterectomy to a woman who identifies as a man and who sought the procedure as part of her putative sex reassignment.

It has also sided with efforts targeting institutions and small businesses that do not recognize same-sex unions as marriages. ACLU lawyers have backed a lawsuit against a Washington State florist who declined to serve a same-sex ceremony, while the group has tried to block Michigan state agencies’ cooperation with Catholic adoption and foster agencies.

Waggoner was critical of the Equality Act and predicted negative consequences if it becomes law.

“Our laws should respect the constitutionally guaranteed freedoms of every citizen, but the so-called ‘Equality Act’ fails to meet this basic standard,” Waggoner added. “It would undermine women’s equality and force women and girls to share private, intimate spaces with men who identify as female, in addition to denying women fair competition in sports.”

The proposed law would apply not just to employment, but other areas like housing, jury duty, credit, and education. It bars discrimination in retail stores, emergency shelters, banks, transit and pharmacies, among others. It would also specify facility access for self-identified transgender persons, such as access to male and female bathrooms.

David Cicilline, D-R.I., is the bill’s main sponsor in the House, NBC News reports. As of March 13, the bill had 239 co-sponsors in the House.

“In most states in this country, a gay couple can be married on Saturday, post their wedding photos to Instagram on Sunday, and lose their jobs or get kicked out of their apartments on Monday just because of who they are,” he charged. “We are reintroducing the Equality Act in order to fix this.”

U.S. Sen. Susan Collins is the only Republican to back the bill, though she was one of four currently serving Republican Senators to back similar anti-discrimination categories in a 2013 employment bill.

The legislation’s 161 corporate sponsors include PayPal, Google, Amazon, Facebook, Apple and Microsoft. Overall they have a combined revenue of $3.7 trillion, CNBC reported March 8.

Leaders with the U.S. Conference of Catholic Bishops have not yet commented on the Equality Act. However, in the past they have criticized the proposed federal Employment Non-Discrimination Act, which would bar actions deemed to be employment discrimination on the basis of sexual orientation or gender identity.

In May 2010, the bishops said the act “could be used to punish as discrimination what the Catholic Church teaches.” While they called for a “comprehensive religious exemption” to such a bill, there could be “government retaliation” for institutions that rely on such exemptions. Without strong protections, it would be applied “to jeopardize our religious freedom to live our faith and moral tenets in today's society,” they said.

Leading bishops criticized the Employment Non-Discrimination Act in an Oct. 31, 2013 letter to the U.S. Senate, saying it does not advance “authentic non-discrimination.” They warned that the bill’s vague definition of sexual orientation does not distinguish between homosexual “status” and “conduct.” Its concept of “gender identity” rejects the “biological basis of gender” and would give force of law to a view of gender as “nothing more than a social construct or social psychosocial reality.”

CNA investigations have found close to $10 million in spending that targets religious freedom protection, including funding for ACLU projects. Major backers of the campaign include the Ford Foundation, which gives out some $500 million in grants annually, as well as the Arcus Foundation, an LGBT advocacy group that also funds groups that reject historic Christian ethics on LGBT issues. The network of funded groups tends to argue that religious freedoms are too broad if they exempt objectors to “reproductive rights” and LGBT political and legal concerns. 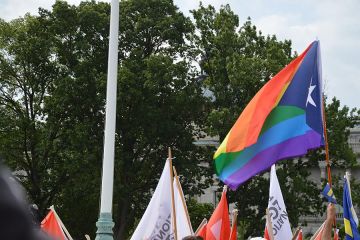 A bill in Congress that brands itself as fighting discrimination might end up doing the exact opposite, said legal experts last week. Will we be allowed to disagree about marriage in the future?

The future of a diverse and pluralistic public square is at stake in the debate over marriage and sexuality, said one legal scholar at an event in D.C. sponsored by the Atlantic.