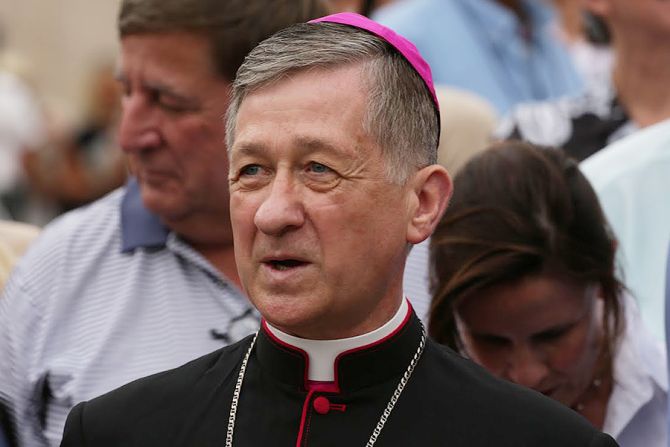 Cardinal Blase Cupich of Chicago has spoken out against a pair of Illinois abortion bills, calling them a radical and disturbing movement away from the common good.

In a March 23 letter to the people of his archdiocese, Cupich encouraged Catholics to take a stand against the legislation.

One of the bills – introduced as House Bill 2495 and Senate Bill 1942 – "seeks to strip unborn persons of any protection - or even consideration - under the law and declares abortion to be a 'fundamental right' and matter of health care," he warned.

The bill would remove many of the medical regulations surrounding abortion in the state, including a ban on partial-birth abortion. It would also require private health insurance to fully fund abortion.

"The end result is that an abortion could be obtained at any stage of pregnancy, including late term, for any reason and without any regulation. The law would no longer guarantee any modicum of humanity or compassion for any unborn person in Illinois, even if they are partially born," the cardinal said.

He added that the bill would also undo the state's Abortion Performance Refusal Act, which currently offers protection for medical personnel who object to advising for or participating in abortion.

"In so doing, rights of conscience, especially religious objections, will be lost," he said.

Another piece of legislation – introduced as House Bill 2467 and Senate Bill 1594 – would repeal a current Illinois law requiring parental notification for a minor seeking an abortion, unless a judge grants a waiver.

Cupich said the parental notification law is a "common sense" measure that helps ensure that parents can "be part of the life-altering decision of their minor child in the case she seeks an abortion." He noted that the law was unanimously upheld by the Illinois Supreme Court six years ago.

"As citizens of a state and people of faith who care about the common good, I urge you to join me and my brother bishops in an effort to defeat this radical departure from current law and practice in our state," the cardinal said.

He encouraged Catholics in the archdiocese to contact their state legislators and ask them to oppose the legislation. The Illinois Catholic Conference offers resources to connect people with their representatives.

The Illinois bills are part of a broader state-level battle over the legality of abortion. In January, New York passed an expansive law declaring abortion to be a "fundamental human right," broadening the legality of late-term abortions, and allowing non-physicians to perform abortions, as well as removing protections for babies born alive after a botched abortion.

A similar bill in Virginia failed in February after video circulated online of the bill's proponents suggesting that it would allow abortion even during labor and that babies who survived an abortion attempt could be left to die of exposure.

Other states, including Mississippi, Kentucky, Tennessee and Georgia, have passed or are considering bills that would ban abortion once the unborn baby's heartbeat can be detected, usually around six weeks into pregnancy.

Several states have also passed "trigger bills" that would ban abortion if Roe v. Wade were to be overturned by the Supreme Court, placing the question of legal abortion back with the states.

Illinois Governor J.B. Pritzker has said that he wants Illinois to be "the most progressive state in the nation when it comes to standing up for women's reproductive rights." He is expected to sign both abortion bills if they come to his desk.

"As Illinois faces so many pressing issues involving human life and dignity, it is incomprehensible that our elected officials have decided the pressing issue of the day is to enhance the chances that the lives of the most vulnerable and voiceless will be taken," they said.

"Abortion is not health care. It is the intentional taking of innocent and defenseless human life," the bishops said.

"We hope to lead all people of goodwill to rise up and be heard in opposition to these terrible efforts."