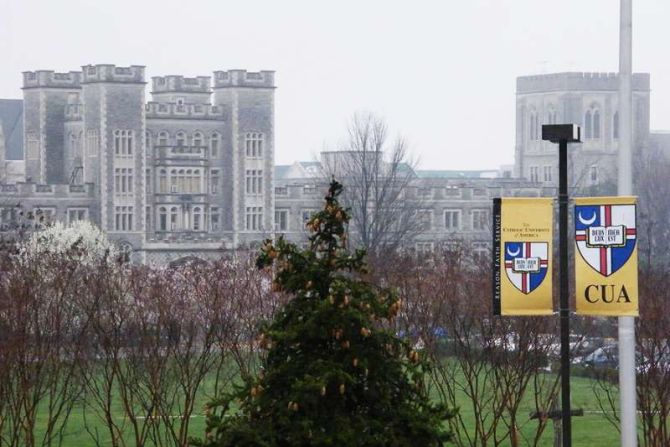 "I am so proud of our students," CUA president John Garvey wrote in an op-ed for the Arlington Catholic Herald April 24.

"This month the student government association, the body that represents our undergraduates, passed a resolution asking the university to prohibit access through the campus network to the 200 most frequently visited pornography websites. I told them we'd be happy to."

The non-binding resolution was passed by a vote of 13 to 12, and student body president Jimmy Harrington signed it April 1.

Student Sen. Gerard McNair-Lewis, a junior at the university, was the resolution's sponsor.

Garvey noted that pornography has become more accessible than it once was; where in the past it could only be found in "leather-bound books in gentlemen's clubs and private libraries," today "any 6-year-old can find it on a cellphone."

In addition, pornography has become more graphic, and advances in technology not only make pornography more addictive, but also make it easier for people to slip into the mindset of: "We don't need one another for sexual fulfillment. We can summon imaginary partners at the touch of a button."

"I think that basic human urges are fairly constant from one generation to another. But technology can change our stimuli and the way we respond. That's happening here," Garvey said.

Reproductive technology such as artificial contraception have reinforced the idea, Garvey asserted, that if sex is merely a form of recreation, then "any partner will do: even a virtual one."

"Our students are right to be concerned about the trend in this direction, because the digital revolution's ambition is to make virtual reality indistinguishable from life," he noted.

The Catechism of the Catholic Church describes pornography as a "grave offense."

It "offends against chastity because it perverts the conjugal act, the intimate giving of spouses to each other" and does "grave injury to the dignity of its participants," the Church teaches.

"Civil authorities should prevent the production and distribution of pornographic materials," the Catechism says.

Of course, Garvey acknowledged, blocking pornography on the university's internet system will not solve students' appetite for porn-they can still use their phones or access a site that is not yet blocked.

But, "it does communicate a point of view that our students say they want to hear," Garvey wrote.

"It says that this is not the sort of relationship they should be looking for, and we're not going to lend our system to help them find it."

"We are working on implementing those blocks, and should have the top sites blocked within weeks."

One of the resolution's co-sponsors, Alexandra Kilgore, told CNA that she was surprised to learn action had not already been taken.

"I was honestly shocked to learn that such a ban wasn't already in place. Even my public high school blocked inappropriate content on its wi-fi, so I knew The Catholic University of America could do better," she said.

"As a woman, I thought it was important to be a cosponsor to bring to light that pornography is not just a men's issue. Not only does the industry exploit and prey upon primarily women and girls, but females can struggle with addiction and consumption just as much as males."

Kilgore described the resolution as a positive expression of corporate concern among the student body, not a condemnation.

"Our resolution is not intended to shame anyone or to make pornography addiction more isolating than it already is. Rather, it demonstrates the Student Government Association's commitment to the well-being of the student body and the University's continued demonstration of the teachings of the Catholic Church."

Harrington rejected the idea that blocking pornography amounted to censorship or a violation of personal freedoms, saying "it is a regulation that the national University of the Catholic Church or any private institution ought to enact."

Harrington pointed out in his statement that many secular organizations ban pornography from their networks, not only out of moral concerns, but also because such websites often contain viruses and other malware that can damage machines.

"If a secular company can block these sites from their networks and computers, then I am even more convinced that The Catholic University of America ought to be able to and should regulate these sites on its own network," Harrington said.