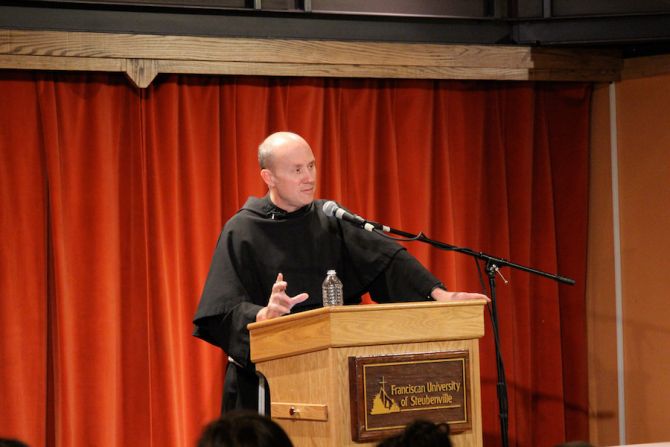 "It's both humbling and an honor to be chosen to lead Franciscan University of Steubenville," Pivonka said in a May 22 statement.

"Over 30 years ago, I first arrived at Franciscan as an undergrad and received an outstanding education as well as life-changing spiritual formation as part of a dynamic, Catholic intellectual and faith community," he added.

Pivonka will assume presidential duties immediately, and be formally installed as president at a date not yet determined.

A 1989 graduate of the university, the priest has a long affiliation with the school. He served in 1998 and 1999 as assistant to Fr. Michael Scanlan, and is closely associated with Scanlan's tenure at the university.

Scanlan is the long-time university president who is credited with imbuing a failing regional college with a sense of "dynamic orthodoxy," introducing the charismatic renewal to its campus, stabilizing the college financially, and attracting faculty and students from across the country.

Pivonka played a key role in one of Scanlan's major initiatives: the university's "household" system. Households, small single-gender, dorm-based faith communities, were among the aspects of university life Scanlan introduced in order to support the faith formation of students. Pivonka served as director of household support from 1996 to 1998.

The priest has also served as director of the university's well-known youth conferences, a professor of theology, director of the school's Austria program, and as vice president for mission and planning from 2003 to 2005.

In recent years, the priest has led Franciscan Pathways, an evangelistic initiative of his Francscan province, focused on conversion, spiritual formation, and the Holy Spirit in the lives of Catholics. In that role, he produced "The Wild Goose" video series on the Holy Spirit, as well as other documentaries and pastoral videos.

Pivonka "brings a unique array of perspective, experience, and qualifications to this role. His work as a nationally known preacher and evangelist combined with prior senior-level administrative experience at Franciscan will serve the University well," the university's board chairman, Fr. Malachi Van Tassell, TOR, said in a March 22 statement.

In addition to an undergraduate degree from Franciscan University, Pivonka has an MA in theology from Washington Theological Union, a doctorate in education from the Graduate Theological Foundation.

The priest's appointment follows the tenure of Fr. Sean Sheridan, TOR, who announced last month that he would resign after nearly six years in the role.

David DeWolf, vice chair of the university's board of trustees, said that after Sheridan's resignation, the university board searched for " a president who was led by the Holy Spirit, a champion for dynamic orthodoxy, and an exceptionally strong executive who understands and values the unique culture and demands of academia and the importance of strong collaboration between the president and the faculty."

"After significant prayer and a robust interview process, it quickly became clear that Father Dave Pivonka possesses all of these qualities," DeWolf said.

Pivonka takes the reins after the university has faced questions about the handling of historical sexual harassment cases, and its manner of addressing sexual assault claims made by students. Scanlan, in particular, has been criticized for his apparent response to allegations of sexual misconduct made against a fellow Franciscan priest.

In his last year as president, Sheridan also faced criticism from some faculty members and internet-based groups and blogs, who questioned his commitment to ensuring a faithfully Catholic approach to university education, especially following a January incident in which a professor was found to have used a text with inflammatory passages – termed "blasphemous" and "obscene" by critics – for an advanced reading course.

Sheridan apologized to those disturbed by the text's use, and highlighted the importance of forming students "to do battle against the blasphemy and heresy rife in our culture today."

Pivonka said May 22 that he is eager to being his new appointment. 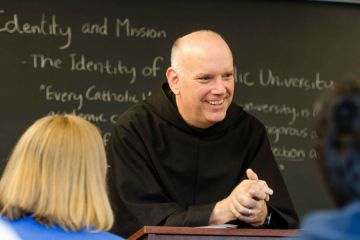 Fr. Sean Sheridan, TOR, has resigned as president of Franciscan University in Steubenville, Ohio. Fr. Sheridan informed the university’s trustees of his decision during a regular meeting of the board on Friday.