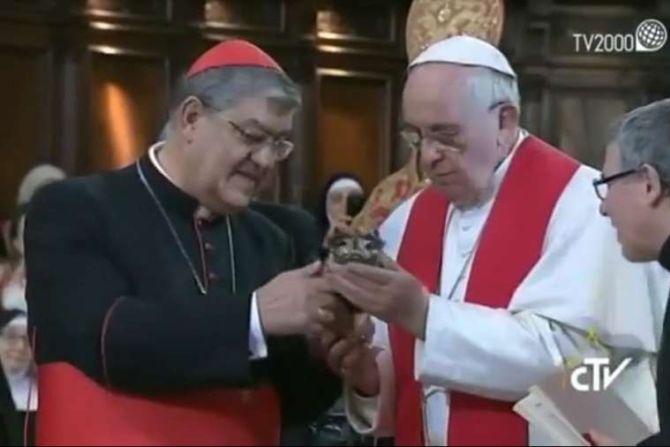 The miracle of the liquefiction of the blood of early Church martyr St. Januarius took place Thursday in Naples.

The blood was shown to have liquefied shortly after 10 a.m. during Mass in the Naples' Cathedral of the Assumption of Mary.

The Mass was celebrated by Cardinal Crescenzio Sepe, Archbishop of Naples, who in his homily, strongly criticized the violent crime of Neapolitan streets.

Despite the city's recurring miracle, "the evil that the hateful and violent killers commit in Naples is limitless," he said." In effect they try to kill at birth just the possibility of making a future…"

This, he noted, generates fear and insecurity, and goes against the common good.

"We must ask ourselves: does Naples still have a great and sincere heart? Us citizens of today's Naples have to answer this question with truth, therefore, with realism, with honesty and courageously, without letting ourselves be taken by a false nostalgia of the times we once had," he stated.

St. Januarius, or San Gennaro in Italian, the patron of Naples, was a bishop of the city in the third century, whose bones and blood are preserved in the cathedral as relics. He is believed to have been martyred during Diocletian persecution.

The blood did not liquefy in December 2016, but Monsignor Vincenzo De Gregorio, abbot of the Chapel of the Treasure of San Gennaro, said it was a sign that Catholics should pray rather than worry about what the lack of miracle could mean.

"We must not think of disasters and calamities. We are men of faith and we must pray," he said at the time.

The vial has sometimes changed upon the visit of a pope.

Sepe then received the vial back from the pope and noted that the blood had partially liquefied.

The last time blood liquefied in the presence of a pope was in 1848 when Bl. Pius IX visited. The phenomenon didn't happen when St. John Paul II visited the city in October 1979, or when Benedict XVI visited in October 2007.