After communion denial, what does Joe Biden think about abortion? 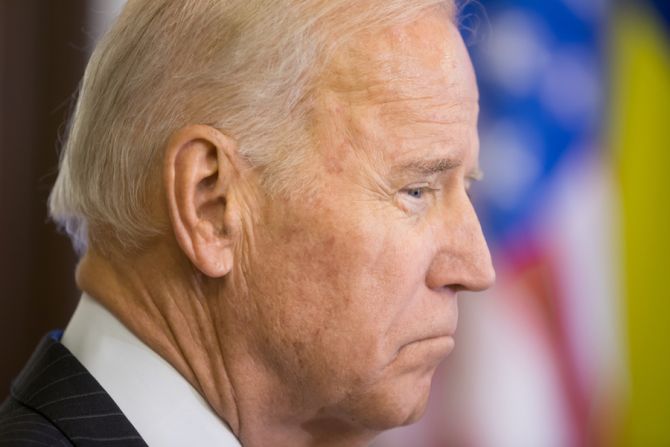 Vice president of USA Joe Biden during his visit to Kiev and meeting with President of Ukraine Petro Poroshenko. | DropofLight/Shutterstock

Presidential candidate Joe Biden's denial of reception of Holy Communion in South Carolina on Sunday has renewed scrutiny of his evolving views on abortion.

Over the course of his decades-long career, the Catholic former vice president has said in the past that the Supreme Court decision Roe v. Wade went too far, but he has now pledged to "codify" its full effects in federal law. He has been for, and then against, bans of taxpayer funding for abortion and he been against, and then for, extreme practices like partial birth abortion.

"Sadly, this past Sunday, I had to refuse Holy Communion to former Vice President Joe Biden," Morey explained in a statement sent to CNA.

"Holy Communion signifies we are one with God, each other and the Church. Our actions should reflect that," he stated.

"Any public figure who advocates for abortion places himself or herself outside of Church teaching," the priest added.

The Catholic Church teaches that life begins at the moment of conception, and that every act of abortion is the wilful taking of innocent human life. In the 2008 "Meet the Press" interview, Biden was asked "as a Roman Catholic" when he thought life began.

He said that he was "prepared as a matter of faith to accept that life begins at the moment of conception," but added that to impose that belief upon others through the application of law would be "inappropriate in a pluralistic society."

"There is a debate in our church, as Cardinal Egan would acknowledge, that's existed. Back in 'Summa Theologia,' when Thomas Aquinas wrote 'Summa Theologia,' he said there was no--it didn't occur until quickening, 40 days after conception. How am I going out and tell you, if you or anyone else that you must insist upon my view that is based on a matter of faith? And that's the reason I haven't," Biden said.

In his 1995 encyclical Evangelium vitae, Pope St. John Paul II warned of a political mentality where "the original and inalienable right to life is questioned or denied on the basis of a parliamentary vote or the will of one part of the people-even if it is the majority."

"This is the sinister result of a relativism which reigns unopposed: the 'right' ceases to be such, because it is no longer firmly founded on the inviolable dignity of the person, but is made subject to the will of the stronger part," he wrote.

"To claim the right to abortion, infanticide and euthanasia, and to recognize that right in law, means to attribute to human freedom a perverse and evil significance: that of an absolute power over others and against others."

Biden, a Democrat, originally from Scranton, Pennsylvania, was elected to the U.S. Senate in 1972 representing the state of Delaware. He served in that role until 2009, when he was elected Vice President as the running mate of President Barack Obama.

In Biden's 36 years in the Senate and eight years as vice president to President Barack Obama, he has reversed himself a number of times on the issue of abortion.

While he largely supported the Supreme Court's 1973 decision that found a legal right to abortion, Roe v. Wade, Biden said in 1974 he believed the decision "went too far."

In 1981, he voted for a constitutional amendment allowing states to overturn Roe v. Wade; but the next year he voted against such an amendment.

In a 2012 vice presidential debate, Biden warned that the opposing ticket would appoint judges who would outlaw abortion, and promised that a Democratic administration would not do that.

In the 2008 vice presidential debate, he bragged about spearheading "the fight against Judge Bork," a Supreme Court judicial nominee in 1987, warning that Bork would have changed Roe v. Wade if he were confirmed to the Court.

In a 2008 interview with NBC's "Meet the Press," Biden said Roe is "as close to a consensus that can exist in a society as heterogeneous as ours" in that it left decisions on life to the mother in the first trimester of pregnancy, allowed the states some intervention in the second trimester, and that "the weight of the government's input" in the third trimester is that the pregnancy is carried to term.

Biden's 2020 campaign platform calls for the codification of Roe v. Wade as federal law. It also would ensure, as part of a health care "public option," coverage of "a woman's constitutional right to choose."

Shortly after announcing his candidacy for president in April this year, Biden reversed his support for Hyde after Democrats highlighted his long-time stance, prompting a backlash from other candidates and the progressive wing of the party. He also abandoned his support for the Mexico City Policy, promising to overturn the rule if elected.

A point of consistency for Biden has been his opposition to parental notification laws and laws barring minors from seeking abortions out-of-state, both of which he has spoken against. His 2020 campaign platform calls for ending state "TRAP" laws on abortion, or laws restricting abortion access such as requiring parental notification or mandatory waiting periods.