Bishop Daniel Flores of Brownsville tweeted that "the translation of the Latin hymnody in the editio typica of the Liturgy of the Hours is a tremendous contribution to the liturgical heritage. The theological insight and aesthetic of the Latin hymns will have an English voice into the future; a work of theological transmission."

Before the vote, the Fall General Assembly was treated to a concert performance in which the hymn translations were sung for the bishops.

The choir, which was directed by Adam Bartlett of Denver, consisted of Fellowship of Catholic University Students missionaries who live in the Baltimore area, as well as music students from the Catholic University of America. The choir sang the opening verse of the hymns, and were then joined by the bishops.

Bartlett told CNA that the choir had only just met up and rehearsed Tuesday morning before performing before the bishops. He knew some of the singers through his work with FOCUS, and he has directed the choir that performed at the organization’s national conference for the past four years.

Before ICEL did this translation, the vast majority the hymns that were printed in the English edition of the Liturgy of the Hours were not translations of those found in the editio typica.

"What's unique about this translation is that the hymns of the Latin typical edition are actually being translated, which didn't happen the first time around,” said Bartlett.

“So we have hymns from St. Ambrose, Gregory the Great, you know, all of the great hymn writers … that are being translated and also paired with chant tunes that come from our rich tradition. In addition, of course, to modern melodies that they can be sung with,” he added. He said these translations created “great utility” as they could be sung with different tunes.

Bartlett said he found the updated hymns to be “absolutely gorgeous” and “so rich with theological imagery.” He thinks that these hymns are going to “make a really remarkable contribution to the musical life of the Church.”

“These are our hymns as Catholics,” he said. “These are the ones that come from the liturgy itself, and are put in the place where they ought to be sung, which is the Liturgy of the Hours. But I think that's probably going to have an impact on the hymns that we sing at Mass as well."

Valeria Lamarra, a chorister who sang on Tuesday, got involved with the ICEL hymn project through her school’s campus ministry. She had never met anyone she performed with before Tuesday morning.

“We had half an hour to practice, before getting up in front of 200 bishops,” said Lamarra. “It feels like a huge victory that the changes passed.” 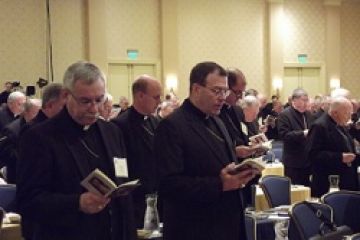 US bishops approve revisions to Liturgy of the Hours

The U.S. Conference of Catholic Bishops has approved a plan to draft an amended edition of the English-language Liturgy of the Hours for use in the United States.