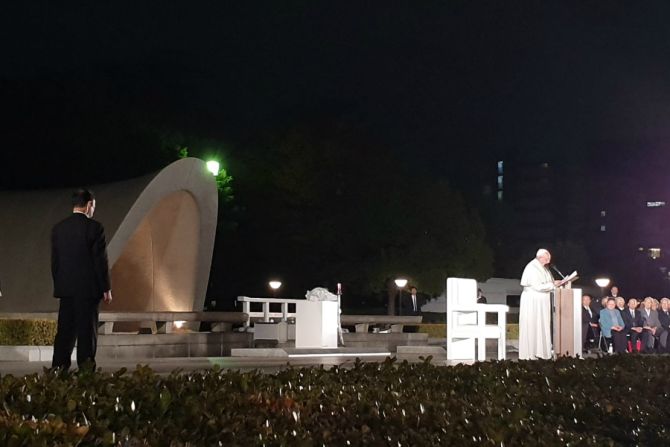 Pope Francis prayed for peace Sunday at the site of the atomic bomb in Hiroshima, where he called for an end to war and the threat of nuclear weapons.

"How can we propose peace if we constantly invoke the threat of nuclear war as a legitimate recourse for the resolution of conflicts?" Pope Francis said Nov. 24 in Hiroshima's Peace Memorial Park.

"May the abyss of pain endured here remind us of boundaries that must never be crossed. A true peace can only be an unarmed peace," the pope said.

More than 90% of Hiroshima's buildings were destroyed by the blast. By the end of 1945, the death toll rose to 140,000 with people developing intestinal bleeding and leukemia from the residual radiation that followed.

"In a single plea to God and to all men and women of good will, on behalf of all the victims of atomic bombings and experiments, and of all conflicts, let us together cry out: Never again war, never again the clash of arms, never again so much suffering," Pope Francis said after a moment of silence for the victims of Hiroshima.

"Indeed, if we really want to build a more just and secure society, we must let the weapons fall from our hands," he said.

Pope Francis quoted Gaudium et Spes, which states that "peace is not merely the absence of war … but must be built of ceaselessly." He added that the lessons of history show that peace is the fruit of justice, development, solidarity, care for our common home, and promotion of the common good.

"I am convinced that peace is no more than an empty word unless it is founded on truth, built up in justice, animated and perfected by charity, and attained in freedom," he said.

Within a week of the bombings of Nagasaki and Hiroshima, the Japan announced its unconditional surrender brining World War II to a close on August 15, 1945.

Peace Memorial Park, located on the epicenter of the atomic explosion, opened ten years after the bombing. The Japanese parliament named Hiroshima a "city of peace" in 1949.

"I felt a duty to come here as a pilgrim of peace, to stand in silent prayer, to recall the innocent victims of such violence, and to bear in my heart the prayers and yearnings of the men and women of our time, especially the young, who long for peace, who work for peace and who sacrifice themselves for peace," Pope Francis said.

"With deep conviction I wish once more to declare that the use of atomic energy for purposes of war is today, more than ever, a crime not only against the dignity of human beings but against any possible future for our common home," he said.

The pope repeated: "The use of atomic energy for purposes of war is immoral, just as the possession of atomic weapons is immoral, as I said two years ago. We will be judged on this."

Earlier on Sunday, Pope Francis visited the site of the atomic bombing in Nagasaki where he denounced the 'unspeakable horror' of nuclear weapons

"The Catholic Church is irrevocably committed to promoting peace between peoples and nations," the pope said in Nagasaki.

"Peace and international stability," he stated, "are incompatible with attempts to build upon the fear of mutual destruction or the threat of total annihilation."

Twenty survivors of the Hiroshima bombing attended the ceremony. Among them was Kojí Hosokawa, who was less than one mile from the epicenter of the bombing and the only survivor in his building. He is now 91 years old.

"Although there is little time left for me, I believe that passing on the experience of Hiroshima to
the next generation is the final mission assigned to us A-bomb survivors," she shared at the pope's peace meeting.

Pope Francis addressed the survivors in Hiroshima: "Here I pay homage to all the victims, and I bow before the strength and dignity of those who, having survived those first moments, for years afterward bore in the flesh immense suffering, and in their spirit seeds of death that drained their vital energy."

"We cannot allow present and future generations to lose the memory of what happened here," Pope Francis said. Be witnesses of hope in the face of evil, Francis urges Catholics in Nagasaki

On the Feast of Christ the King Sunday, Pope Francis encouraged Catholics to not be indifferent to evil, but to bear witness to hope and to the kingdom of God still to come.