After a prominent archbishop commented to journalists last week that he would hold the hand of a person dying of assisted suicide, two priests and a cardinal offered their perspectves to CNA on what a priest ought to do if faced with a person wishing to commit assisted suicide.

"Sitting there holding their hand as if it is no big deal is a huge mistake. I think it's in fact quite cruel...I think we need to as a culture think more about preaching about why suicide is wrong," Father Pius Pietrzyk, chair of pastoral studies at St. Patrick's Seminary in Menlo Park, California, told CNA.

Archbishop Vincenzo Paglia, president of the Pontifical Academy for Life, made headlines Dec. 10 by say he would be willing to hold the hand of someone dying from assisted suicide, and that he does not see that as lending implicit support for the practice.

"In this sense, to accompany, to hold the hand of someone who is dying, is, I think a great duty every believer should promote," he said, adding that believers should also provide a contrast to the culture of assisted suicide.

Paglia spoke at a Dec. 10 press conference preceding a two-day symposium on palliative care, being sponsored by the Pontifical Academy for Life and the WISH initiative, part of the Qatar Foundation.

If faced with a situation of a person who is resolved to commit assisted suicide, priests must continue to do whatever they can to dissuade them, Pietrzyk said, and remind them that their eternal soul is at stake.

Beyond that, he said, a priest must do anything in their power to stop a person from committing suicide by any means, even if it means subjecting themselves to civil punishment.

"We stand up for life even at the cost of civil punishment," Pietrzyk said.

"To do otherwise is to deny the sanctity of life. To sit there passively and stroke someone's hand instead of actively trying to prevent them is to deny the dignity of their life, is to deny the gift that God has given them in their life. We as a Church refuse to do that."

He said it is a good idea to invite those family members of the person committing suicide who are opposed to the decision to come together and pray.

He also said he thinks priests need to remind the faithful from time to time, whether in catechesis or in homilies, that committing suicide is gravely immoral and that the people who do so risk their souls.

"There's no question that, at least in this country, the suicide rate has increased. And I think, again, this false sense of mercy is what's behind it...I think our failure to condemn suicide has led and will continue to lead to a greater number of suicides."

Father Thomas Petri, a moral theologian at the Dominican House of Studies in Washington D.C., told EWTN News Nightly that accompaniment should always be governed by love, and love is guided by truth.

"I think [Paglia is] just looking to show that Christ doesn't abandon anyone, that's how he started his response. I do think, however, that it was imprudent to suggest that a priest could hold the hand of someone engaged in assisted suicide," Petri told EWTN News Nightly.

"It's important not to normalize or regularize this as though it's some other medical treatment. I wouldn't hold somebody's hand if they were about to shoot themselves, or about to hang themselves, I would stop them, which is what a priest ought to do if he's in that situation."

Pietrzyk echoed Petri's point, adding that a Catholic would not "hold the hand" of a woman having an abortion, nor of the executioner flipping the switch on an electric chair.

"There's a fundamental misunderstanding about pastoral ministry, especially with regards to suicide," he continued.

"Accompaniment isn't directionless. Accompaniment is to accompany people to heaven. When you're in a situation where you're accompanying someone into Hell, you've done something terribly wrong...and I think we as a Church have to say no to that," Pietrzyk said.

Modern culture tends to associate dignity with ability, Petri said, and thus it can be tempting to think that a bedridden or suffering person has lost their dignity.

"Christianity says, on the contrary, your dignity has not been erased, in fact you have more dignity precisely because we follow a God who became man to suffer. And so God redeems suffering and makes it dignified," Petri said.

Cardinal Willelm Eijk of Utrecht told CNA this week that a priest cannot be present when voluntary euthanasia or assisted suicide is performed as this might imply that the priest has no problems with the decision.

Eijk also explained that a priest can celebrate the funeral of a person who died by assisted suicide or voluntary euthanasia only in some circumstances, including in some cases of psychiatric illness, though suicide is always illicit. 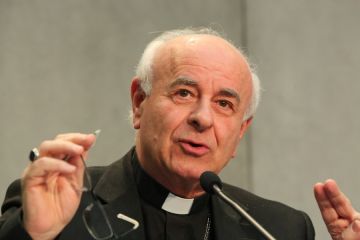 Analysis: Has Archbishop Paglia opened a new fight over 'accompaniment'?

Catholics hoping for a swift correction to Paglia’s insistence on the need to “accompany” someone committing assisted suicide may be disappointed. Archbishop Vincenzo Paglia, president of the Pontifical Academy for Life, said Tuesday that he would be willing to hold the hand of someone dying from assisted suicide, and that he does not see this as lending implicit support to the practice. The New Zealand Parliament voted in favor of legalizing euthanasia and assisted suicide Wednesday, sending the bill to a referendum next year.