Former priest on trial in France for sexual abuse of minors

Bernard Preynat, a former priest of the Archdiocese of Lyon, is on trial before a civil court in France. He has been accused of sexually abusing dozens of minors between 1971 and 1991; he was found guilty by an ecclesiastical tribunal last year.

Allegations against Preynat, 74, became public in 2015. Prosecutors dropped the case the following year after an initial investigation, but a victims' group with more than 80 members who say they were abused by Preynat led to a reopening of the case.

Preynat led a scouting camp until 1991, when parents accused him of abuse to the Lyon-Vienne archdiocese. He was then banned from leading scouting groups, but remained in ministry until being removed by Cardinal Philippe Barbarin of Lyon in 2015.

Cardinal Barbarin was convicted by a French civil court in March 2019 on charges of failing to report the allegations against Preynat.

An ecclesiastical trial against Preynat was opened in August 2018, and he was convicted in July 2019 of committing delicts of a sexual character against minors under the age of 16. He was sentenced to dismissal from the clerical state.

"In view of the facts and their recurrence, the large number of victims, the fact that Father Bernard Preynat abused the authority conferred on him by his position within the scout group that he had founded and which he led since its creation, assuming the dual responsibility of head and chaplain, the tribunal decided to apply the maximum penalty provided for by the law of the Church, namely dismissal from the clerical state," the Lyon archdiocese stated July 4, 2019.

At his civil trial in Lyon Jan. 14, Preynat acknowledged "caressing" boys, saying, "it could be four or five children a week."

"I have heard the suffering of these people, which I'm guilty of causing," he said. "I hope that this trial can take place as quickly as possible."

He has been accused of abusing some 80 boy scouts who were between 7 and 15, beginning in the 1970s, but many of the incidents have passed the statute of limitations.

Preynat's trial was to have begun Jan. 13, but was delayed a day so lawyers could participate in a protest of planned pension reforms.

The cardinal was given a six-month suspended sentence when he was convicted of failure to report the allegations against Preynat, but has appealed. The result of his appeal should come later this month.

Cardinal Barbarin offered to resign as Archbishop of Lyon, but its acceptance is pending the outcome of his appeal; he has, however, stepped back from the governance of his see. Bishop Michel Dubost has been serving as apostolic administrator of Lyon since June 2019. 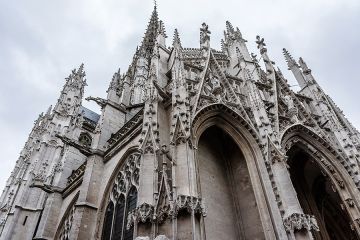 French Cardinal Philippe Barbarin will remain the Archbishop of Lyon, the Vatican announced Tuesday. According to a statement released by the Holy See Press Office, Pope Francis has not accepted the cardinal's resignation, though Barbarin has stepped back from the day-to-day leadership of the diocese.