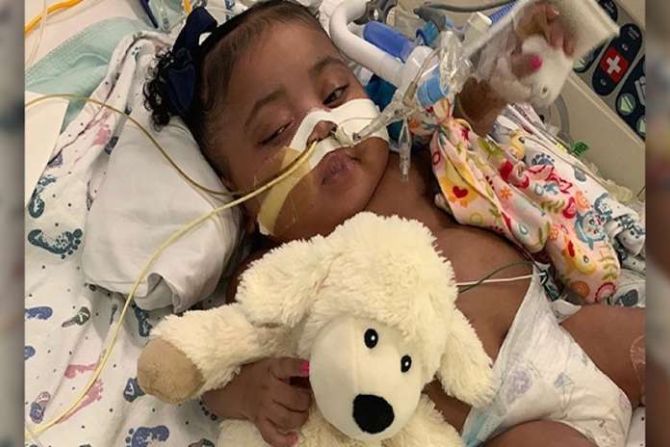 An appeals court heard arguments Tuesday regarding the medical treatment of a terminally ill child in Fort Worth, and whether a law regarding the dispute resolution process is constitutional.

Tinslee Lewis was born prematurely Feb. 1, 2019, and has since been in the cardiac intensive care unit at Cook Children's Medical Center.

The Second Court of Appeals of Texas heard arguments in the case Feb. 4. It is unknown when it will rule in the case, and it has ordered that medical treatment for Lewis be continued until it does so.

Joe Nixon, the attorney for the Lewises, said TADA grants "medical paternity over autonomy," the Fort Worth Star-Telegram reported.

The case has divided the pro-life community in Texas.

Dr. Joe Pojman, Texas Alliance for Life's executive director, said ahead of the hearing that "We believe the dispute resolution process in Texas law is both good public policy and is constitutional."

He added that "the Texas law is among the best in the nation. It balances patients' rights to make end of life decisions with the rights of physicians to not indefinitely order painful, medically inappropriate interventions to terminally ill patients that only prolong their deaths with no proportional benefit."

Texas Alliance for Life, along with the Texas Catholic Conference of Bishops and several other pro-life groups, disability advocates, and medical groups, filed an amici curiae brief Jan. 29 supporting TADA.

The brief said TADA has given physicians and families "a structure for having difficult end-of-life conversations-and for reaching a resolution if the families and treating physician do not ultimately agree."

"A medical intervention that could further prolong life can also, directly or indirectly, inflict significant suffering without proportionate benefit to the patient. A physician might conclude that making further interventions on a patient near the end of life, in a medical situation with no meaningful prospect for cure or recovery, would inflict only harm on the patient-violating one of the oldest and most deeply held principles of medical ethics. Medical providers in that position face not only an ethical dilemma but also feel moral distress over being the instrument used to inflict that non-beneficial suffering on a patient."

The amici curiae brief called TADA a "carefully balanced statute" that should be upheld by the appellate court.

It added that striking down TADA would constitute judicial activism, stating that "disagreements about a policy decision made by the Legislature, however deeply felt, do not state a constitutional claim."

In explaining its interest in the case, the Texas bishops' conference said it rejects "medical decision-making based on flawed "quality-of-life" arguments which are often used to falsely justify euthanasia. "The bishops have consistently supported the truth that decisions regarding treatment should be made through this lens of the inherent sanctity of all human life while recognizing that underlying medical conditions can have an impact on the effectiveness or appropriateness of certain medical interventions."

The Texas bishops' conference said it supports "continued legislative improvements" to TADA, "particularly those that safeguard against any discrimination in providing necessary and effective life-sustaining treatment," but it "generally supports" the law's framework "as a balanced dispute resolution process that respects both patient dignity and healthcare provider conscience."

Trinity Lewis is being supported by Texas Right to Life, which has said that "the 10-Day Rule has robbed countless patients of their Right to Life and right to due process."

Texas Home School Coalition is also supporting Trinity, in light of its concern for parental rights. In an amicus curiae brief of Jan. 27, it argued that "in permitting an ethics committee" to substitute their decisions regarding Tinslee's best interest for Trinity's decisions," TADA "violates the substantive due process rights of [Trinity] and potentially all parents seeking medical care for their children."

The home school group charged that "the quality of one's life is so personal that the decision must belong to the one living it or the person designated to make that decision. The doctors believe that pain and suffering without a medical probability of recovery is immoral. Mother believes that God still has a plan. The state cannot determine whose beliefs are superior."

Its amicus brief asked, "How can the state possibly have a compelling state interest in ending the life of a child for no other reason than the doctor no longer wishes to provide care for her?" It also characterized TADA as having "no limitations on the reason for the doctor refusing to honor the patient's directive," saying it "is so vague that a doctor could decide not to continue providing services for any reasons, such as the color of the patient's skin or the religious beliefs of the patient."

The state of Texas also filed an amicus curiae brief in the case Jan. 17 asking that the court declare TADA unconstitutional, arguing the statute "allows the government to deny an individual his or her life, and it does so without constitutionally sufficient process."

It characterized the statute's dispute resolution process as denying patients and their proxies "sufficient notice and opportunity to be heard," as well as "a neutral arbiter to decide their fate."

TADA includes a '10-day rule' that says when the attending physician has decided and an ethics or medical committee has affirmed that a life-sustaining treatment is medically inappropriate, but the patient or their responsible continues to request the treatment, the attending physician and the health care facility are not obligated to provide life-sustaining treatment after the 10th day after the decision is provided to the patient or their responsible.

The rule says the physician is to make a reasonable effort to transfer the patient in such a case to a physician who is willing to comply with the directive.

Joe Nixon, who is representing the Lewises, was a member of the Texas House of Representatives from 1995 to 2007.

Tinslee Lewis has Ebstein's anomaly, a congenital heart defect; chronic lung disease; and severe chronic high blood pressure, according to the AP. She has been on a ventilator since July, and also requires cardiac support, painkillers, sedation, and medical paralysis. She currently has severe sepsis.

The hospital said that Lewis' healthcare providers agreed by August that continued care was futile, and had begun discussing with her family the withdrawal of life-sustaining treatment by September. The hospital's ethics committee decided unanimously Oct. 30 that further treatment was medically inappropriate.

The hospital intended to stop Lewis' treatment Nov. 10, after disagreeing with the decision of her mother regarding her treatment.

At a December hearing, judge Sandee Bryan Marion said she would allow more time for an alternative facility to be found for Lewis' care. Cook Children's said at that time that it would take no action to withdraw life sustaining treatment from Lewis for seven days from the court's decision, to allow plaintiffs to file a notice of appeal and a motion for emergency relief with an appeals court.

Dr. Jay Duncan, a physician attending Lewis, said at the hearing that until July, there had been hope she might be able to go home, but it became clear that surgical and clinical options had been exhausted and her treatment was no longer beneficial.

A judge acting for the Tarrant County district court ruled Jan. 2 that indefinite medical interventions for Lewis could be stopped, in accord with the Texas Advance Directives Act, but Lewis was granted emergency relief the following day by the appeals court.

Bishop Michael Olson of Fort Worth has offered to assist Lewis' family "in seeking compassionate and appropriate care for her in a Catholic health care facility."

Cook Children's has said it has contacted "more than 20, well-respected healthcare facilities and specialists over the course of several months, but even the highest level of medical expertise cannot correct conditions as severe as Tinslee's."

Disagreement over end-of-life reform is among the three criteria on the basis of which the Texas bishops' conference urged parishes in March 2018 not to participate in the activities of Texas Right to Life.

The bishops said they "have been compelled to publicly correct Texas Right to Life's misstatements on end-of-life care and advance directives, in which Texas Right to Life implied that the legislation the bishops were supporting allowed euthanasia and death panels rather than the reality that the legislation reflected the long-standing Church teaching requiring a balance of patient autonomy and the physician conscience protection." A Texas appeals court ordered Friday that a hospital continue medical treatment for Tinslee Lewis, a terminally ill child in Fort Worth, until it rules in the case.

After a Texas judge on Thursday allowed a hospital to stop medical treatment for Tinslee Lewis, a terminally ill child in Fort Worth, the local bishop offered to help her family seek care in a Catholic healthcare facility.