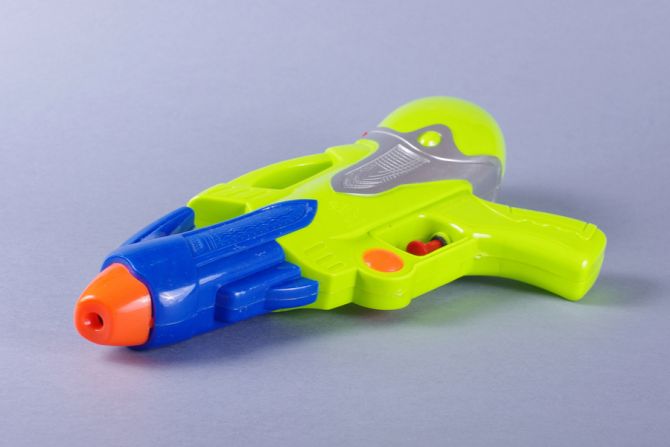 After photos appearing to depict blessings or baptisms by water gun went viral online, several priests cautioned that Catholics should take care to treat sacred objects and rites with a proper sense of reverence.

"Putting holy water into a squirt gun and treating it as if it were a comedy sketch on SNL is treating both the sacrament and the blessed water unworthily," said Fr. Pius Pietrzyk, assistant professor of canon law at St. Patrick Seminary in Menlo Park, California.

He noted that the Catechism teaches that profaning sacred objects or treating them unworthily is a sin – the sin of sacrilege.

Pietrzyk spoke to CNA about a number of photos online appearing to depict priests holding water guns at people, purportedly to meet "social distancing" guidelines during the ongoing coronavirus pandemic.

In one photo, a priest points a water gun at a baby in a baptism gown from several yards away.

The priest, Fr. Stephen Klasek, pastor of two parishes in the diocese of Nashville: St. Mark in Manchester, Tennessee, and Saint Paul the Apostle in nearby Tullahoma, took to Facebook Tuesday to explain his intentions.

Saint Mark Catholic Church said in a Tuesday Facebook post that the photo was intended to be humorous. According to the social media parish's post, the family had asked the priest to pose for the photo in imitation of similar pictures on the internet. It said the gun did not contain holy water and was not squirted at the baby.

The parish said it felt a need to "clarify the photo that has gone viral as we have been receiving inquiries about it. It has garnered almost a million views in Twitter, has been in the news in several websites and memes. It had good and controversial comments."

While Klasek's photo was apparently staged, other photos have also been circulating the internet, including pictures of a priest purporting to bless parishioners with a water gun in Detroit. Fr. Tim Pelc told Buzzfeed News he had shot parishioners with holy water in a water gun as something "for the kids of the parish."

Pietrzyk cautioned against assuming that the intention in a specific instance was to mock the sacraments. "I think we ought to proceed from the premise that it involves individuals who were attempting to make light of the difficulties of the coronavirus situation," he told CNA.

Still, the priest said, while the intent may have been lighthearted, the photos raise serious concerns.

Holy water is a sacramental, a material object meant to help us sanctify our lives and dispose us to better receive the graces of the sacraments, he explained. Holy water reminds us of the purifying power of baptism, and of Christ, who referred to himself as living water.

"[B]lessed objects, including holy water, should be treated with respect and reverence as things set aside to build up the life of faith," Pietrzyk said.

Fr. Daniel Cardo, who holds the Pope Benedict XVI Chair of Liturgical Studies at St. John Vianney Theological Seminary in Denver, noted that there is a liturgical instrument specifically intended for the sprinkling of water - the aspergilium – which is used during the Easter Season and in other ceremonies when holy water is sprinkled.

"We do this all the time. We bless people at a distance with holy water. We have a beautiful thing that we can use [the aspergilium]. We don't need toys to do that," he told CNA.

Both Cardo and Pietrzyk suggested that an actual baptism performed with a water gun would be illicit.

But even a staged photo raises the possibility of the sin of scandal, which the Church defines as "an attitude or behavior which leads another to do evil," Pietrzyk said.

Staging such a photo, he said, may lead others "to treat the things of God and of Divine Worship as mere objects of derision, stripping them of their sacral import and infusing them with a sense of the slap-stick."

"It especially leads non-believers into concluding that people of faith do not take their beliefs seriously and, in extreme cases, can lead people to conclude that the priests involved think that such acts of religion are no more than superstitious nonsense."

Cardo agreed. He said the photo, while perhaps intended to be funny, could lead to confusion about the Sacrament of Baptism and how it is conducted.

"There is definitely a risk of trivializing" the sacrament, he said, and of undermining the sacredness of the rite that the Church views as opening the door to eternal life.

Ultimately, Cardo said, it is a question of whether we believe what the Church professes about holy water – and what it means to act accordingly.

"Do we believe that this water that has been blessed is actually different than what it was before? In other words, do we believe that through the prayers instituted by the Church, that water is not the same – there is something that changed in that water, that therefore makes it capable of doing something in the object or person that receives it?"

If so, he said, "then the consequence of treating that water with the utmost love and devotion and respect would be the most natural thing."