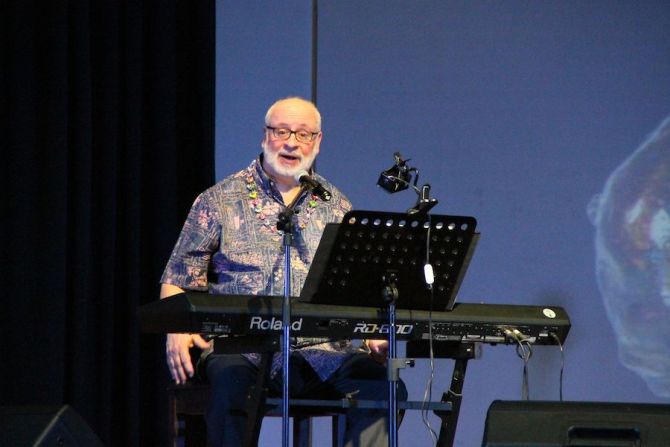 "Early this year we became aware of allegations of sexual misconduct by David Haas, and we learned the Archdiocese of Saint Paul and Minneapolis was considering a decision not to provide him a letter of suitability," GIA Publications said in a June 13 Facebook post.

"In response, we suspended our sponsorship and publishing relationship with Mr. Haas, and have not sponsored his work since late January," the publisher added.

The Archdiocese of St. Paul and Minneapolis has also received multiple allegations of sexual misconduct against the composer, a spokesman told CNA, adding that in 2018 the archdiocese declined to provide Haas with a requested letter of reccomendation.

Haas, 63, is the composer of several songs included in the "Gather" hymnal published by GIA, which is among the best-selling and most used hymnals in American Catholic parishes.

The composer, a layman, is a central figure in the "contemporary liturgical music" movement that began in the 1970s, along with composers Marty Haugen, Fr. Michael Joncas, Dan Schutte, and the "St. Louis Jesuits" group.

Among Haas' songs are some contemporary standards: "Glory to God," "You are Mine," "We are Called," and "Blest are They," among others.

A group called Into Account, which says it "provides advocacy and the most up-to-date resources to survivors seeking accountability," sent last week a letter to some Catholic organizations and media outlets, addressing allegations against Haas.

"These individuals are in positions of professional and/or personal vulnerability that make it difficult for them to identify themselves publicly. They are almost all fearful of Haas's retaliation, and based on what they have reported, we believe those fears to be well-founded."

"The pattern that emerges from the reports we've received on Haas's behavior constitutes a repeated, unethical abuse of the professional and spiritual power he has had in church music circles. Haas has allegedly targeted multiple women using techniques that abuse prevention experts identify as grooming, to create conditions in which women felt obligated to perform sexual favors in exchange for professional opportunities. His generosity, we are told, often came with a sexual price tag," Into Account said.

"The allegations we've received also contain a disturbing component of spiritual manipulation. Haas reportedly focuses attention on women with past histories of abuse, then uses the vulnerabilities created by trauma to create intimacy. Multiple women have reported to us that Haas is skilled at making his targets feel spiritually affirmed, seen, and loved, with a keen understanding of how that spiritual intimacy can then be exploited sexually," the letter added.

"Some women have described romantic relationships with Haas that felt consensual in the beginning, but were then marked by sudden, overwhelming sexual aggression from Haas, in which any resistance was met with extreme anger. Other women have described incidents that we would interpret as outright sexual battery, involving groping, forcible kissing, and aggressive, lewd propositions. The youngest victim reported to us was 19 years old at the time of the alleged sexual battery, while Haas was over 50."

Stephanie Krehbiel, Into Account's executive director, told CNA June 14 that the group has heard from nearly a dozen alleged victims of Haas.

Krehbiel said the group first heard from an alleged victim of Haas through a confidential form on its website in early 2020. That contact let to reports from other alleged victims, and from people active in liturgical music circles, who had observations or concerns about Haas.

One alleged victim reportedly told Into Account that Haas had made unwanted sexual advances and forcibly kissed her during a religious education congress in Los Angeles.

According to Krehbiel, another said she met Haas as a student participant in Music Ministry Alive, a musical formation program for teenagers founded by the composer, who allegedly made inappropriate advances a few years later, when the former student was 19.

Krehbiel told CNA that her group aims to assist victims of sexual misconduct, assault, or battery. She added that because the allegations against Haas involve only adults, contacting law enforcement is "up to the discretion of the survivor."

Into Account shared the information it had received, Krehbiel told CNA, because alleged victims hope their stories will prevent future misconduct. They hope "to take away his access to vulnerable people," and ensure that "he is not able to continue to do this."

Haas told CNA Sunday that he is preparing to release a statement this week, but declined to answer specific questions. As of Saturday, Haas' page was no longer available on Facebook.

A spokesperson for the Archdiocese of St. Paul and Minneapolis, in which Haas lives, told CNA June 14 that it too received reports about the composer.

"In November of 2018, the Archdiocese of Saint Paul and Minneapolis received two reports that Mr. Haas acted inappropriately with two adult women at a recent event in another state. Both women complained that Mr. Haas' conduct that evening made them feel uncomfortable. Mr. Haas denied misconduct. In 1987, the Archdiocese had received a complaint alleging that David Haas had made an unwelcomed sexual advance toward a young adult woman, which he also denied," archdiocesan spokesman Tom Halden told CNA.

"Furthermore, the Archdiocese advised Mr. Haas that he was not allowed to provide services at Catholic institutions in the Archdiocese without disclosure of the complaints made against him," Halden added.

GIA's June 13 statement added that "new allegations of sexually abusive conduct by Mr. Haas continue to be reported. We take these reports seriously. GIA Publications supports and stands with victims. We must join together to address and prevent sexual abuse."