Benedict XVI to pray at his family's gravesite in Germany 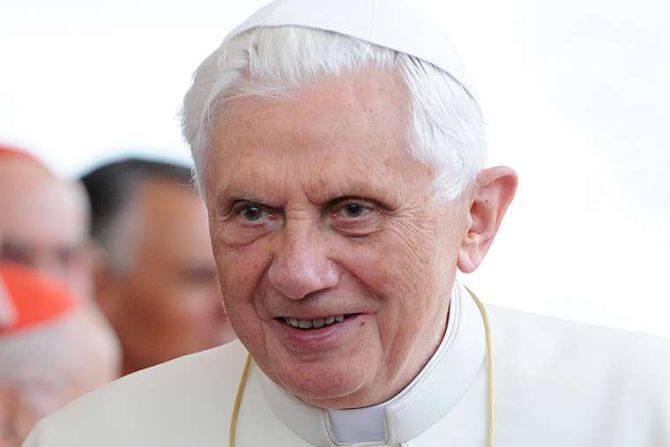 Pope emeritus Benedict XVI will visit his family's gravesite and his former home in Pentling, Germany, in the afternoon on Saturday.

According to a June 20 statement from the Diocese of Regensburg, the former pope will visit the residence where he lived as "Professor Ratzinger" from 1970 to 1977.

He last time seeing the home was during his 2006 pastoral trip to Bavaria. Pentling is just outside Regensburg.

The diocese said Benedict XVI will then visit the Ziegetsdorf cemetery to spend some time in prayer at the graves of his parents and sister.

The former pope has been in Regensburg since June 18. He flew there from Rome to see his 96-year-old brother, Msgr. Georg Ratzinger, who is in seriously poor health.

Benedict's father died in 1959 and his mother in 1963. His older sister Maria, who never married, managed his household until her death in 1991.

News of Benedict XVI's visit to Germany broke on the morning of June 18.

On Friday, the two brothers celebrated Mass together for the Solemnity of the Sacred Heart of Jesus, according to a diocesan statement.

The diocese said: "For the first morning in his old homeland, an authentic Bavarian breakfast awaited the pope emeritus in the seminary. There were pretzels, which Archbishop Georg Gänswein, who accompanied him, was also pleased about."

The Regensburg diocese added that after the Mass, apple strudel, a popular pastry in Bavaria and Austria, was served.

In a statement Thursday, the Regensburg diocese said: "Pope emeritus Benedict XVI flew this morning from Rome to Bavaria to be at the side of his seriously ill 96-year-old brother. It is perhaps the last time that the two brothers, Georg and Joseph Ratzinger, will see each other in this world."

It is believed to be Benedict's first trip outside Italy since he stood down as pope in 2013.