Analysis: As Archbishop Viganò denounces Vatican II, the Vatican is not speaking 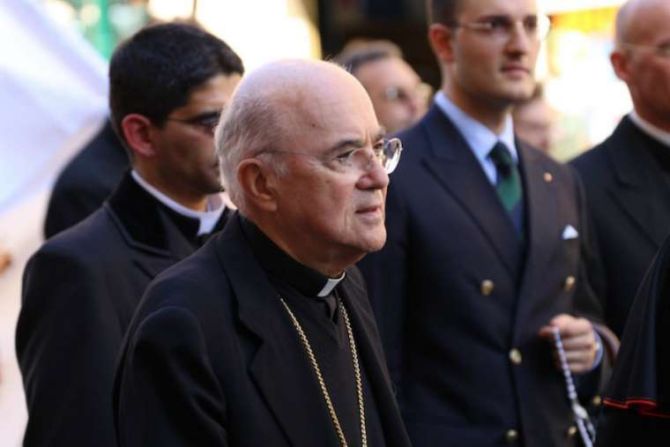 When Archbishop Carlo Viganò made headlines in August 2018, it was for a sweeping open letter that accused Church officials of complicity and cover-up in the scandal surrounding sexual abuser Theodore McCarrick.

The pope's response to the Viganò letter was direct: "I will not say a single word on this."

Two years later, Archbishop Viganò is still speaking. But the archbishop has changed his topic, from the McCarrick affair to conspiracy theories about the coronavirus pandemic, the Marian apparition at Fatima, and the Second Vatican Council. The archbishop's audience has grown large in the last two years; it now includes even the president of the United States. And now his allegations have begun to teeter on a repudiation of the authority of the Church itself.

Still, neither Pope Francis nor the Vatican have said a word about Viganò or his growing pile of missives, even as prominent analysts say the archbishop is at the point of "breaking with the Church," and may well bring his followers with him. There could be a few reasons for that.

In an interview last month, Viganò offered a set of criticisms against the Second Vatican Council that are not especially original, but are striking because they come, apparently, from the pen of a former papal representative to the U.S.

Viganò claimed that at the Second Vatican Council - an ecumenical council of the Church - "hostile forces" caused "the abdication of the Catholic Church" through a "sensational deception."

"The errors of the post-conciliar period were contained in nuce in the Conciliar Acts," the archbishop added, accusing the council, and not just its aftermath, of overt error.

His interview, and his other recent comments on Vatican II, made arguments familiar to anyone who has spent time among adherents of the Society of St. Pius X or other traditionalist groups outside the full communion of the Church: That the council's decrees on religious liberty and interreligious dialogue reject Catholic doctrine. That as a "pastoral council" Vatican II does not bind Catholics. That the council has led to "the infiltration of the enemy into the heart of the Church."

Viganò has suggested that the Second Vatican Council catalyzed a massive, but unseen, schism in the Church, ushering in a false Church alongside the true Church.

Those arguments have been addressed and critiqued repeatedly by theologians and historians, including Benedict XVI, and in the mind of the Church's hierarchy, have been sufficiently refuted. Objections to the council's authority have long been rejected by the Church's authorities.

To be sure, few theologians or bishops would argue that Vatican II's documents are above reproach, in terms of their style, their language, or their presentation of the faith. And scholars continue to disagree about how to interpret some key texts of the council. But accepting the legitimacy and authority of the Second Vatican Council is a necessary component of maintaining communion with the Church herself.

Viganò's recent interviews have largely been understood as a call to reject the entirety of the Second Vatican Council. A pope, he says, must "rejoin the thread of Tradition there where it was cut off," and the Church must "recognize the error and deception into which we have fallen."

It might be argued that in the most charitable interpretation possible, Viganò's claims should be understood as studiously ambiguous- attempting to avoid a direct repudiation of Catholic doctrine while doing precisely that, just in a more circumspect manner. Catholics, including many of Viganò's supporters have criticized the work of Fr. James Martin, SJ, with accusations of the same kind of studied ambiguity, albeit on a different subject, and criticized the Holy See for failing to respond.

But given that Viganò has decried the "perverse nature" of the Second Vatican Council, the plain meaning of his argument seems clear, and it seems nearly impossible to lend his claims even the designation of "studied ambiguity." Nevertheless, whether his writing meets the formal criteria of either heresy or schism is subject only to the judgment of the Holy See.

The Vatican, however, has not spoken.

One possible reason for the silence is that Church leaders, including Pope Francis, might simply not grasp how much influence Viganò has. The archbishop's reach is impossible to judge completely, but his letters and interviews are the regular fodder for a set of websites and YouTube channels with very large audiences, and after the archbishop was endorsed by President Trump last month, he has become a figure of awe among the web of QAnon conspiracy theorists.

Most of his influence is online; he has no official power whatsoever, and the Holy See might simply not appreciate how many people read and revere the archbishop. But for a certain set of Catholics, Viganò is among the trusted figures in the Church, and his influence on them is considerable.

The archbishop's admirers are not just fringe figures. A sitting U.S. diocesan bishop signed onto Viganò's open letter accusing shadowy authorities of exploiting the coronavirus pandemic to usher in a one-world government, and the U.S. president has invoked an open letter from Viganò as a kind of institutional Catholic endorsement.

Vatican authorities might be hoping Viganò goes away quietly, but that seems increasingly unlikely, especially if the archbishop and his supporters are emboldened by a positive response to his recent turn against the Second Vatican Council, and towards the American political landscape.

It is also unlikely that Viganò will go away quietly if, as some observers have speculated, the archbishop is being supported by a Catholic faction with a clear objective and, through Viganò, a mouthpiece. How Viganò is supporting himself, and where he is now living, are matters only of speculation. But there is a point worth noting about the archbishop's recent missives.

Viganò is a lawyer who worked as a government official and a diplomat. He is not a theologian. He is, by many accounts, a practical man, more inclined to get things done than to wax philosophic. But his writing has taken an uncharacteristic turn towards the theological arguments of those who reject the Second Vatican Council, and it displays surprising familiarity with those arguments. If the Holy See does decide to investigate Viganò's publications, it might consider the circumstances in which they have been written, and what kind of "assistance," and from whom, Viganò has received.

The Holy See might also be reflexively disinclined to address Viganò because, for all his peculiarities, he is still an archbishop and a retired high ranking diplomatic figure. In the system of Vatican court etiquette, admonishing him openly would be something of a brutta figura. One aspect of clericalism is a near ironclad unspoken commitment among bishops to avoid publicly criticizing one another, and that may be a factor in discomfort with responding to Viganò's claims.

But beyond clericalism, the Holy See might be disinclined to any kind of open criticism if it has sincere concerns for the archbishop's health, or his personal circumstances.

Finally, there is the uncomfortable fact that Viganò's more substantive claims - those regarding McCarrick - have not yet been addressed.

A criticism of the archbishop's theological missives could come across as a very selective responsiveness, especially given that many Catholics, not just the pope's critics, know that questions regarding Amoris Laetitia have also gone unanswered. Ultimately, though, it seems unlikely that optics are a major factor in the Holy See's considerations of the Viganò situation, because, quite simply, its communications apparatus does not usually seem to engage public issues with that level of tactical analysis.

Whatever the reason, the voice of Archbishop Viganò has become influential among a broad swath of Catholics, who are now hearing from the archbishop that an ecumenical council should be rejected. Viganò is speaking more frequently, and more boldly. Whether the pope, and the Holy See, will decide that now is the time to say a "single word," or more, remains to be seen.