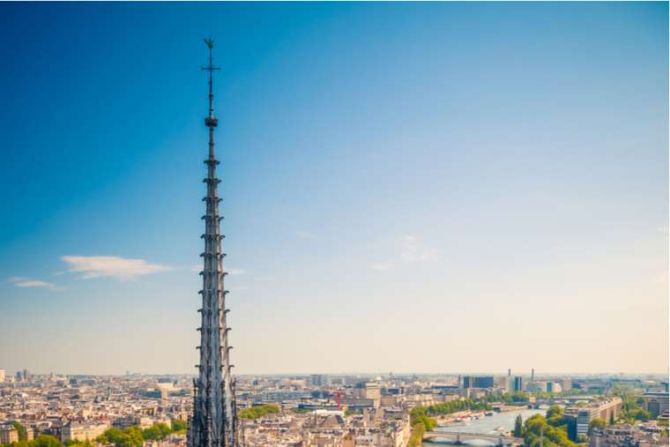 The spire of Notre Dame collapsed in the April 15, 2019 fire. | Shutterstock.

President Emmanuel Macron of France has announced that the Notre Dame Cathedral spire will be rebuilt as a replica of the one destroyed in the fire at the cathedral last year.

Macron's government had previously initiated an architectural competition to submit a variety of suggestions for the restoration. Macron has also called for "an inventive reconstruction" of the cathedral with a more contemporary design.

The possibility of a new design for the spire of the historic building had been controversial. The designs proposed included a rooftop swimming pool and a greenhouse atop the 850-year-old cathedral.

Last year, the French Senate passed a bill mandating that Notre-Dame be rebuilt as it was before the fire.

Macron's change of mind on the spire construction is due to a desire to finish the project quickly, the BBC reported. Paris is scheduled to host the Olympics in 2024, and choosing a new design for the spire would have delayed the construction.

A major fire broke out in Notre Dame cathedral on the evening of April 15, 2019. The roof and the spire were destroyed. Shortly after midnight April 16, firefighters announced that the cathedral's main structure had been preserved from collapse.

Its original spire was constructed in the 13th century, but was replaced in the 19th century due to damage.