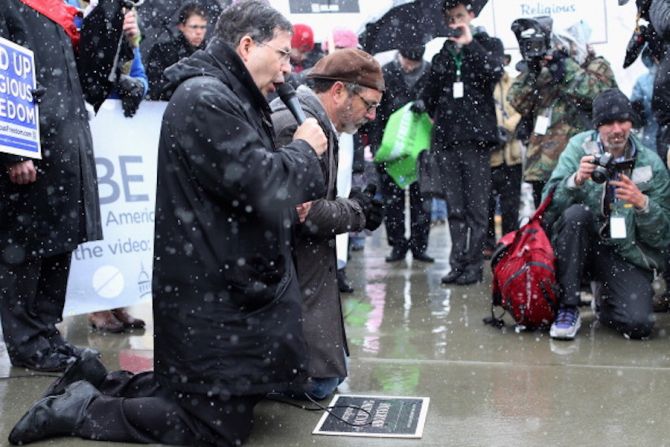 Priests for Life national director Fr. Frank Pavone has resigned from advisory positions in the reelection campaign of President Donald Trump. The priest withdrew at the direction of Church authorities, he told CNA Friday.

"I've been requested by the competent ecclesiastical authority not to have an official title/position on the advisory boards. So, as a priest in good standing, I've followed that request," Pavone told CNA July 24, in response to questions about his role in the Trump campaign.

Pavone's role in a political campaign was unusual for a priest. Members of the clergy require permission to "have an active part in political parties," according to the Church's canon law.

In April, Pavone told CNA that he did not believe himself to need permission for campaign involvement because he considered Trump's reelection to be a matter of urgency. "I'm not going to ask anybody's permission to go scream that the house is on fire," he said at the time.

But on Friday, Pavone said that he had "been asking for permission to serve on these advisory boards" when he was "requested" to resign from them.

Pavone did not indicate what authorities had directed him to resign from the Trump campaign. In 2005 Pavone was incardinated in the Diocese of Amarillo, Texas, when he transferred to that diocese from the Archdiocese of New York with plans to begin a pro-life religious order of priests. Those plans did not materialize, and Pavone found himself at odds with Bishop Patrick Zurek, soon after the bishop was installed in 2008.

In 2011, the dispute between Pavone and Zurek became public, after the priest was recalled to the diocese and suspended by the bishop. Pavone appealed to the Vatican, and the suspension was eventually lifted in 2012.

In April, the priest told CNA that his relationship with Zurek remained rocky, describing communication with his bishop as "dysfunctional," and saying that he was in the process of transferring to a new diocese.

The Diocese of Amarillo has not responded to repeated requests from CNA for clarity about Pavone's political activity or ecclesiastical status, including requests to clarify whether he has faculties to minister publicly as a priest.

Pavone told CNA Friday that he remains incardinated in the Amarillo diocese, "but my transfer has been canonically completed to a different bishop who has good will toward me and my work." He declined to name that diocese, saying that "the announcement of what diocese I'm in now is up to the same ecclesiastical authority to make."

Pavone's role in the 2016 Trump campaign sparked considerable controversy in the Church. Ahead of the election the priest filmed a video at the Priests for Life headquarters, urging support for Trump. The video was filmed with the body of an aborted baby laid before Pavone on what appeared to be an altar.

Soon after video's release, Zurek said he would open an investigation into the incident, calling it "against the dignity of human life" and "a desecration of the altar," and adding that "the action and presentation of Father Pavone in this video is not consistent with the beliefs of the Catholic Church."

While the diocese has not announced the results of that investigation, Pavone claims that he has been "cleared of the past complaints/investigations/disciplinary actions by the bishop of Amarillo. That chapter is closed."

Pavone said that while he will no longer occupy a position in the Trump campaign "nothing has changed in my advocacy for the president, given that the Democrats do indeed pose a grave threat to 'the rights of the Church' and 'the common good,' a point I'll be making constantly between now and November 3."

"Any cleric who doesn't see that point has his head in the sand or in a Democrat echo chamber," the priest added.

Pavone is not the only priest in recent U.S. history to make headlines for involvement in an election.

In 2008, Chicago priest Fr. Michael Pfleger drew attention for appearing as part of a "People of Faith for Obama" coalition during then-Senator Barack Obama's primary battle against Hillary Clinton for the Democratic Party's presidential nomination.

Pfleger's bishop, Cardinal Francis George, said at the time that "while a priest must speak to political issues that are also moral, he may not endorse candidates nor engage in partisan campaigning."