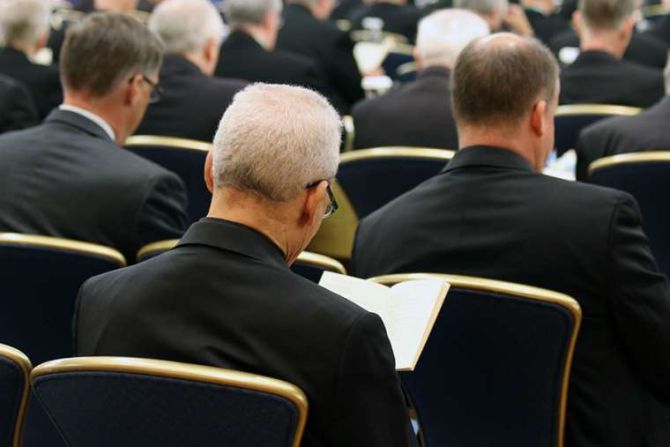 The U.S. Conference of Catholic Bishops said Friday that a staff member who recently said she was "elated" by the selection of Senator Kamala Harris as Joe Biden's presidential running mate was not speaking on behalf of the conference.

"At no point are Conference staff authorized to speak on behalf of the bishops in support of, or in opposition to, candidates for elected office," said James Rogers, chief communications officer for the bishops' conference.

"Because the comments in question may have led to confusion among the faithful, let me be clear," he said in an Aug. 14 statement. "As Catholics, we are each called to evaluate candidates for public office by how closely their policies align with Gospel principles, as expressed by the U.S. bishops in Forming Consciences for Faithful Citizenship."

Rogers did not address the substance of the staff member's comment.

His statement coincided with a "clarification" by Catholic News Service (CNS), the official news service of the U.S. bishops' conference, which said that Donna Grimes, associate director of African American affairs in the U.S. bishops' Secretariat of Cultural Diversity in the Church, was giving a personal reaction as a Black Catholic to Harris' selection in its Aug. 12 article.

CNS said that Grimes was not asked to represent the bishops' conference in her comments, and that she did not present herself as representing the conference.

Grimes was identified by her position at the bishops' conference in the CNS article, and remained identified in that way after CNS issued its clarification.

She told the agency that Harris was not her first pick as Biden's running mate, but is "really deserving and brings a lot to the table."

"I was so elated. We, the community, need good news, and this was just wonderful," Grimes told CNS of her reaction to the announcement of Harris. She said she believes Biden and Harris will offer "policy that is favorable to people on the margins" and said she hopes that if elected, they will address health care reform and voting-rights issues.

Pope Francis has called abortion "inhuman eugenics," urged its eradication, and said that the unborn are among those marginalized on the "existential peripheries," for whom the Church must have special care.

Nor did Grimes mention Harris' 2018 questioning of a judicial nominee over his membership of the Knights of Columbus. In questions about the impartiality of nominee Brian Buescher, Harris asked if Buescher was aware that the Knights of Columbus "opposed a woman's right to choose" and were against "marriage equality" when he joined.

The senator's remarks were subsequently criticized as anti-Catholic and one U.S. bishop, Archbishop Charles Chaput, characterized them as "bigoted."

Both Biden and President Donald Trump have been criticized by the U.S. bishops' conference, with Trump frequently facing criticism for his immigration policies, use of the federal death penalty, and cuts to social safety nets.

Last year, USCCB spokeswoman Judy Keane left the bishops' conference after media reports said that she had tweeted in support of President Trump or in opposition to Democrats from her personal Twitter account.

Among Keane's tweets was one that criticized Harris. Responding to a news story saying that Harris, then running for president, promised to raise teacher salaries, Keane wrote "She'll be promising all kinds of things to get elected. Then she'll raise taxes so hard-working Americans have to pay for it all. No thanks."

After Keane's tweets first emerged into the spotlight, the spokeswoman was placed on leave, and shortly thereafter left the bishops' conference. The conference did not issue a clarification on Keane's comments. Nor did it say whether she was fired or left voluntarily.

CNA reported Aug. 13 that a spokesperson for the U.S. bishops' conference had said, "The Conference is a non-partisan 501(c)(3) organization that does not endorse or oppose specific candidates for office. Comments by individual Conference employees are not necessarily a reflection of the Conference's official position."