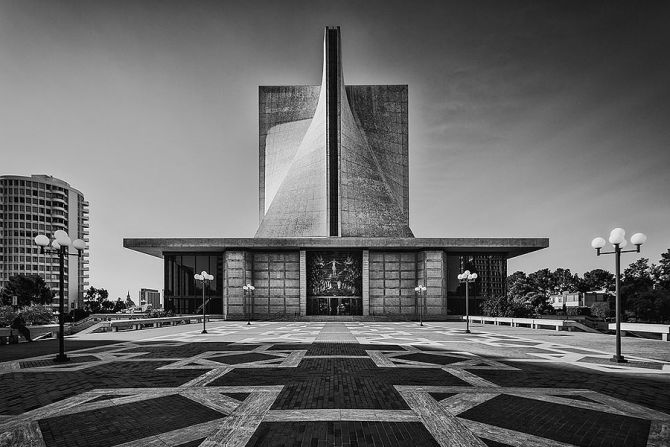 The Cathedral of Sain Mary of the Assumption in San Francisco, Calif. | Slyvain.collet via Flickr (CC BY-NC-SA 2.0).

Parishes in San Francisco, including the Cathedral of St. Mary of the Assumption, have been holding concurrent outdoor Masses in order to adapt to the city's COVID-19 health orders.

"San Francisco is very restrictive, only allowing twelve at any sort of outdoor gathering," Archbishop Salvatore Cordileone said in an Aug. 15 video message.

"We have a very large plaza in front of the cathedral, so there's plenty of room to have multiple Masses at the same time," Cordileone said.

Cordileone said the idea of concurrent Masses came to him as he realized how many priests were available at the cathedral and at the chancery. Attendees at the outdoor Masses were asked to wear masks.

"I envisioned many people on the plaza, and even if they cannot be at the same Mass worshipping together, they can worship together in smaller groups...we do what we can under the circumstances in which we find ourselves, as the Church has always done throughout our history."

"Our intention has always been to conform to what we understand to be the City orders and timelines," the archdiocese said July 2, noting that the city's orders have been changing throughout the pandemic, sometimes on short notice.

In an Aug. 12 letter to the archdiocese' lawyer, City Attorney Dennis Herrera reprimanded the archdiocese for "several things of concern" related to recent Masses. Several of the complaints that the city has received of churches holding indoor Masses, Herrera acknowledged, have turned out to be inaccurate.

Herrera recounted an instance of a pastor, Father Thuan Hoang, livestreaming Mass at the Church of the Visitacion, with fewer than 12 participants present, including altar servers and choir members. Herrera admonished the priest and the altar servers for not wearing masks, and lamented the fact that singing can be heard in the livestream.

"As a reminder, singing is particularly concerning as a method of virus transmission," Herrera said.

CNA was not able to reach Father Hoang by press time.

Herrera also recounted an instance in which a city inspector found "25 to 30 people gathering inside" Star of the Sea Catholic Church "for a scheduled group prayer event."

"Unfortunately, the public cannot come inside houses of worship right now, either for services or to pray," Herrera wrote.

Star of the Sea's pastor, Father Joseph Illo, told CNA that particular episode was likely a spontaneous instance whereby people who had entered the church for Holy Hour began praying the rosary together.

Illo said in spite of City Attorney's statements, the 12 person restriction only applies to "services," and not to private prayer. He said he suspects that whoever reported the gathering to the city mistook the spontaneous rosary for a "service" being put on by the church.

"The church seats 1,000 people, and we're allowed to be open for private prayer," Illo told CNA, adding that the people in the church praying the rosary were socially distanced.

Father Illo said the parish has been committed to remain open for private prayer, at the request of the archbishop. Star of the Sea is the only parish currently offering perpetual adoration in the city, he said.

Illo said he has personally interacted with one city compliance officer, who appeared to be a private investigator whom the city had contracted to check compliance at various sites across the city.

The parish has taken all the necessary precautions, Illo said, including blocking off every other pew, offering hand sanitizer, and cleaning the church twice a day.

With four full-time priests at the parish, Illo said they have been able to adapt somewhat to the 12 person limit, holding four concurrent outdoor Masses, at each of the five Mass times, each weekend.

More people than usual have been coming in lately for Mass and adoration, he said, as well as to avail themselves of a socially-distanced confessional station.

Illo said his parish will continue to bring people the Eucharist "any way we can that is safe, and responsible, and legal."

"We're just going to say boldly: the Mass is essential. We cannot live without the Eucharist," Illo said.

Herrera sent a letter June 29 to the archdiocese' lawyer, ordering the archdiocese to cease-and-desist indoor public Masses and giving it one day to comply.

A lawyer for the archdiocese sent a letter to the City Attorney's Office June 30 saying that Archbishop Cordileone has now notified his priests "that the order limiting religious services to outdoors with no more than 12 people remains in force with appropriate social distancing and face coverings."

Cordileone has pointed out that the city has allowed retail stores to operate at 50% capacity during the same time period that Christians are prohibited from gathering in their churches, even with masks and social distancing in place.