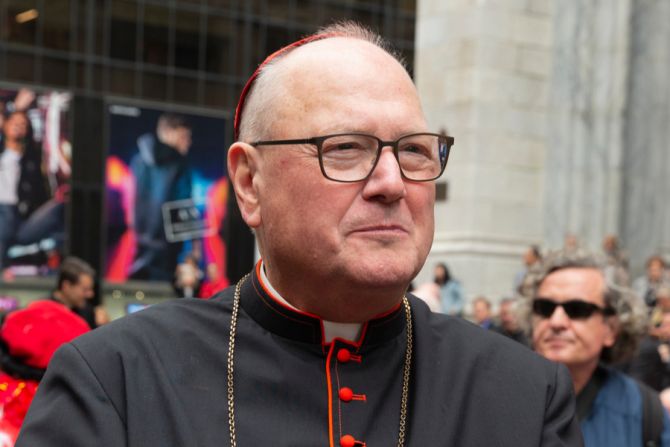 The first night of the 2020 Republican National Convention in Charlotte featured prayers from a cardinal, appeals to religious freedom and school choice, and condemnations of abortion and assisted suicide.

Cardinal Timothy Dolan of New York delivered the opening invocation for the evening portion of the first day of the 2020 Republican National Convention. He had previously led prayers in 2012 at both the Republican and Democratic National Conventions, and at President Trump's inauguration in 2017.

He praised God "for a country where freedom of religion is so cherished" and offered "thanksgiving for democracy."

"Pray we must that all lives may be protected and respected," he said, "in our troubled cities and the police who guard them." Cardinal Dolan also prayed for the unborn, the elderly, health care workers, immigrants, refugees, and victims of religious persecution, trafficking, and war.

Immediately afterward, Charlie Kirk-head of the pro-Trump student organization Turning Point USA and a controversial surrogate for the president-gave a combative address in which he called Trump "the bodyguard of western civilization" who is fighting "the rotten cartel of insiders that have been destroying our country" and "a group of bitter, deceitful, vengeful, arrogant activists who wish to tear down this gift we have been given."

"We will be a country that makes it easier to have many children, to live quiet and peaceable lives and to worship your God without a tyrant getting in your way," Kirk said.

The evening programming also featured a bone cancer survivor, who spoke out against doctor-prescribed suicide.

Natalie Harp, who said she was diagnosed with a rare, terminal bone cancer, said that proponents of doctor-prescribed suicide talk about "health care being a human right," but a right to marijuana, opioids, and the "right to die with dignity, a politically-correct way of saying 'assisted-suicide'."

"I was told I was a burden to my family and to my country," she said, and that she would save the lives of others by preserving resources and taking fatal doses of prescription medicines.

She credited President Trump for her having the "right to try" the experimental treatments that she says saved her life, after being denied participation in clinical trials.

GOP chairwoman Republican National Committee chair Ronna McDaniel condemned abortion, saying that policies that "allow abortion up until the point of birth are not nice."

A board member of the National Association of Catholic Nurses, Maria Arvonio, also appeared in a video with President Trump and several other health care workers, people who have contracted COVID, and others at the White House. Arvonio, who previously was a guest at the White House in May with other nurses who treated the new coronavirus, told Trump "I am so in awe of your leadership."

Trump defied the usual protocol for political conventions by appearing before the final day. He addressed Republican delegates in Charlotte earlier in the day, and appeared in multiple videos in the evening that were aired on the convention's coverage.

He met with Christian pastor Andrew Brunson, who spent nearly two years in a Turkish prison and under house arrest on charges of espionage and supporting a terrorist group. He was released when the U.S. reached an agreement with Turkey in October of 2018. Bruson has maintained he was in Turkey only to spread Christianity.

"To me, President Erdogan was very good," President Trump told Brunson of the Turkish president under whose authority Brunson was imprisoned.

The U.S. Commission on International Religious Freedom has described Turkey's religious freedom conditions as "worrisome" with religious minorities concerned that "governmental rhetoric and policies contributed to an increasingly hostile environment and implicitly encouraged acts of societal aggression and violence."

Erdogan recently re-converted Hagia Sophia, the former cathedral of Holy Wisdom in Istanbul and a UNESCO World Heritage site, into a mosque; he also decided to re-convert the 700-year-old Chora Church into a mosque.

The issues of religious freedom and school choice were mentioned multiple times at Monday's convention proceedings.

Rebecca Friedrichs, a California elementary school teacher who took on the state's teachers' union in a case that went to the Supreme Court, touted Trump's support for "education freedom scholarships."

Donald Trump, Jr. also pointed to his father's support for school choice "It is unacceptable that too many African American and Hispanic American children are stuck in bad schools just because of their zip code. Donald Trump will not stand for it," he said.

Both he and Charlie Kirk brought up churches being closed or seriously limited in their seating capacity by state public health mandates during the coronavirus pandemic, while outdoor protests are allowed to continue.

Noting restrictions in place across the country to mitigate the spread of the coronavirus, Kirk said that in America, "you can freely practice your religion and that church is more essential than a casino."