Several Catholic entrepreneurs this week were awarded $100,000 each as investment in project ideas “that will make a profound impact on the Church and the world.”

Over the past year, some 350 Catholic entrepreneurs submitted their ideas for consideration. By May, the judges had narrowed it down to 12 finalists, who presented their pitches to judges Aug. 29 via Zoom.

The three winning ideas— each of which earned a $100,000 investment— include a Spanish-language podcast network; an initiative to help parents teach the Catholic faith at home; and an organization designed to reach and minister to young adults experiencing same-sex attraction.

CNA spoke with the winners to ask about the genesis of their ideas, and how they expect the prize money will impact their initiatives.

Eden Invitation is a relatively new ministry in the Catholic Church that seeks to provide community, accompaniment and resources for people who experience same-sex attraction or gender dysphoria and who want to unashamedly follow Christ and Catholic Church teaching.

With the help of the OSV grant, they hope to expand to at least seven additional cities soon.

The idea that they pitched to OSV is called "Hearth and Porch," Ochoa said.

The "Hearth" portion involves forming the city-based hubs for young adults to join, where they can pray together and support each other.

The "Porch" portion consists of a testimonial campaign from Catholics who experience same-sex attraction— ideally to be released during June, aka "Pride Month," 2021.

Both Ochoa and Anna Carter, Eden Invitation’s other co-founder, experience same-sex attraction and credit their strong faith backgrounds with providing them the framework and the love for God necessary to stay and thrive in the Catholic Church.

Ochoa said one thing that makes Eden Invitation new and different is the attention they pay to the secular LGBT community, seeking to imitate that movement's sense of radical community and joyful witness— but in service of the Church's teaching, rather than LGBT ideology.

"It's a fresh take in the Church," she said.

Often times when the conversation comes up in the Church, people with same-sex attraction may feel "on the receiving end of ministry" rather than a part of a community, she said.

Ochoa said the outpouring of excitement and support after their project won the OSV prize was very encouraging for them.

"The whole community was really moved. It's really more than $100,000...it's people's lives changed, it's hearts knowing that they have a space in the Church, and recognition that we're loved in God's eyes," she said.

José Manuel De Urquidi, founder and CEO of JDN, told CNA the project's goal is to "evangelize, inform, and entertain Latinos"— both in Latin America and in the USA— with high-quality, engaging podcast content.

In the Latino world, De Urquidi said, people tend to be culturally Catholic, but not well-formed in the faith.

In addition, he said, Latinos are consuming more and more podcasts, and the quality of Latino Catholic podcasts is generally not very high.

"It seems that the New Evangelization has not been reaching Latinos. So that's the idea," De Urquidi told CNA.

De Urquidi said he strayed briefly from the faith intellectually as a teen, and later went to law school, worked in the financial world for a time, and even started a craft brewery. He later earned a Master's degree in Mass Communications, and started a podcast, which grew into the Juan Diego Network.

De Urquidi has been growing JDN for the last year. He said one of the goals is to help Latino Catholic speakers, authors, and influencers start and maintain their own podcasts, at no cost to them.

With the grant he won at the competition, De Urquidi hopes to expand JDN's podcast offerings with new, highly produced podcasts and through more partnerships with Latino leaders. They also plan to host virtual summits to foster community among Latino Catholics, he said.

"The New Evangelization will get to Latino millennials and Gen Z, we are sure of it, and we are just a small part of it," he said.

The niche that their project fills, Nancy said, is a need for a systematic program for parents on how to be the primary faith formators for children.

Nancy launched Catholic Sprouts as a side project a few years ago, while working as a stay-at-home mom to their five children.

Today, they have a "small army" of contractors helping with the project, and Nancy says the prize money will certainly help with being able to hire more help for the project.

Bill and Nancy entered the OSV challenge with the hopes of getting support for the podcast and the written materials they are already producing. Now that they've won the OSV grant, Nancy said their goals are to create an app where their podcast will be available, as well as discussion questions for families after they listen together.

They are also hoping that the grant will help to accelerate Bill's transition from his current job to working on Catholic Sprouts full-time.

Nancy said parents have contacted them saying that listening to the Catholic Sprouts podcast with their kids was actually filling in gaps in their own Catholic formation, and was fostering deep and engaging discussions about the faith around their dinner tables.

The content is meant to spark conversation, which Bill says is an important factor in ensuring children remain within the Catholic faith as they grow up. 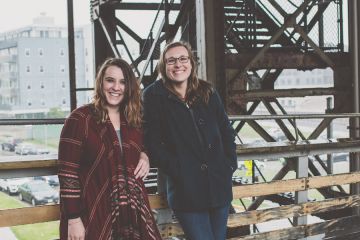 Eden Invitation: A Catholic ministry ‘beyond the LGBT paradigm’

Shannon Ochoa remembers recognizing that she was attracted to women from a pretty young age.