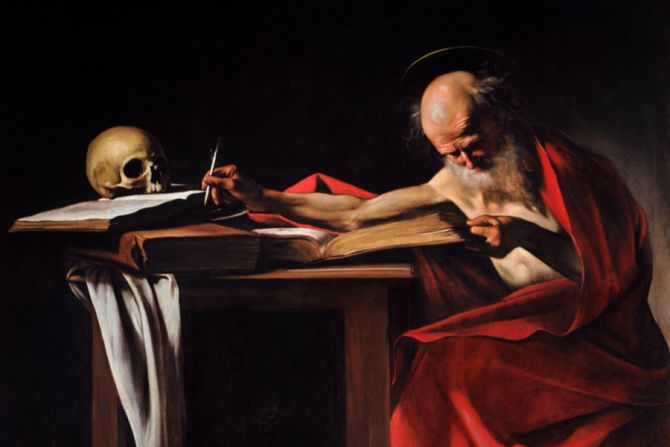 Pope Francis Wednesday highlighted the life and figure of St. Jerome in an apostolic letter for the 1,600th anniversary of the Doctor of the Church's death.

St. Jerome "emerges as a model of uncompromising witness to the truth that employs the harshness of reproof in order to foster conversion," the pope wrote Sept. 30. "By the intensity of his expressions and images, he shows the courage of a servant desirous not of pleasing others, but his Lord alone ... for whose sake he expended all his spiritual energy."

The pope's letter, Scripturae sacrae affectus, detailed the life, work, and personality of St. Jerome, and considered how Catholics can learn from him today.

Bishop Robert Barron, auxiliary bishop of Los Angeles, told CNA that "there is much to savor in Pope Francis's marvelous letter on St. Jerome.  But what I found most uplifting was his insistence that young people, following the example of the great saint, should see the intellectual exploration of the faith as a true spiritual path."

"The Pope wants Catholic schools, universities, and catechetical programs to inculcate in young searchers the tools necessary to plumb the depths of the great theological tradition, at the heart of which is study of the Bible," Barron added.

By his letter, "Francis is reiterating the call of Dei Verbum, the great Vatican II document on Revelation, that there should be a revival of Biblical study in the life of the Church," Bishop Barron said.

In the letter, Pope Francis said that the anniversary of the saint's death "can be seen as a summons to love what Jerome loved, to rediscover his writings and to let ourselves be touched by his robust spirituality, which can be described in essence as a restless and impassioned desire for a greater knowledge of the God who chose to reveal himself."

"How can we not heed, in our day, the advice that Jerome unceasingly gave to his contemporaries: 'Read the divine Scriptures constantly; never let the sacred volume fall from your hand'?" the pope asked.

Jared Staudt, an associate professor of theology at the Augustine Institute in Denver, Colorado, told CNA that the pope's letter recognizes an important saint for contemporary Christians.

"I'm very happy to see Pope Francis highlighting the 1600th anniversary of Jerome's death. There are certain personalities that rise above the ebb and flow of history. Jerome truly stands as a man for all times, and has much to teach us about learning, culture, and holiness. A feisty personality, who could enter into a strong disagreement, he remained above all a faithful man of the Church," Staudt said.

"Francis has called for greater literacy of the Gospel and the great heritage of Catholic culture. Following St. Jerome, Catholics should enter more deeply into the study of the Bible, as well as the great works of classical and Christian literature, overcoming our culture's lack of substance to be able  to serve as 'credible interpreters and translators of our own cultural tradition,'" the theologian added.

In his letter, Pope Francis made a particular appeal to young people, challenging them to explore their intellectual and spiritual heritage as Christians.

"Christianity makes you heirs of an unsurpassed cultural patrimony of which you must take ownership," he urged. "Be passionate about this history which is yours."

The pope's letter said that many people in contemporary society lack religious literacy; that "the hermeneutic skills that make us credible interpreters and translators of our own cultural tradition are in short supply," he argued.

Young people, he said, should be given the opportunity to learn "how the quest of religious truth can be a passionate adventure that unites heart and mind; how the thirst for God has inflamed great minds throughout the centuries up to the present time; how growth in the spiritual life has influenced theologians and philosophers, artists and poets, historians and scientists."

Staudt affirmed the pope's recognition of the intellectual life.

"The intellectual life remains a crucial element of the Christian apostolate. Christ is the Word and our own minds must become attuned to his truth. St. Jerome reminds us in Catholic education of the importance of understanding words  and meaning so that we can enter into the revelation of the Word of God. Attention to the words of Scripture requires effort and is meant to lead us into an encounter of prayerful contemplation," Staudt explained.

"St. Jerome used his extensive classical learning, purified by years of fasting and penance, at the service of the Church. With the huge spike in classical education in recent years, Jerome provides a model of integrating a robust intellectual life with an ardent pursuit of holiness," the theologian explained. "His grasp of grammar and rhetoric were profound, yet he used them in humble service of the Gospel."

Pope Francis said there are two dimensions which characterize St. Jerome and help his personality to be understood: one is his "absolute and austere consecration to God" and the other is his "commitment to diligent study, aimed purely at an ever deeper understanding of the Christian mystery."

St. Jerome also serves as a model for monks and for scholars, "who should always keep in mind that knowledge has religious value only if it is grounded in an exclusive love for God, apart from all human ambition and worldly aspiration," Francis noted.

Jerome lived from around 345 to 420. He spent much of his life in Rome or in the Holy Land, where he died.

The Doctor of the Church translated, among many other works, the books of Scripture into Latin, giving the Church what is known as the "Vulgate."

"Francis points out that Jerome's Vulgate stimulated the development of Christian culture. As Catholics return more and more to the study of Scripture, we can hope that this will reorder our minds, imaginations, and hearts to guide us in our own needed work of rebuilding. Like Jerome, we must translate and transmit the Gospel to our generation, allowing the Word of God to shape our efforts in the New Evangelization," Staudt said.

In addition to his Scriptural translation, St. Jermone also wrote numerous letters on Scripture and is known to have used somewhat polemical language.

Pope Francis explained that "if, as a true 'Lion of Bethlehem,' he could be violent in his language, it was always in the service of a truth to which he was unconditionally committed."

He added that the polemical dimension of the saint's writings can be best understood if read in light of the authentic prophetic tradition of the time.

Jerome studied Scripture because it "led him to know Christ," the pope also noted. "Jerome saw his studies not as a pleasant pastime and an end unto itself, but rather as a spiritual exercise and a means of drawing closer to God."

The pope's letter also urged Catholics to rediscover Scripture with St. Jerome as a guide, because "he leads every reader to the mystery of Jesus."

In his writings, the saint did this, he stated, by "responsibly and systematically providing the exegetical and cultural information needed for a correct and fruitful reading of the Scriptures."

St. Jerome had many skills, the pope said: "competence in the languages in which the Word of God was handed down, careful analysis and examination of manuscripts, detailed archeological research, as well as knowledge of the history of interpretation… This outstanding aspect of the activity of Saint Jerome is also of great importance for the Church in our own time."

Pointing to Dei verbum, one of the central documents of the Second Vatican Council, dedicated to Divine Revelation, he said if "the Bible constitutes as it were 'the soul of sacred theology' and the spiritual support of the Christian life, the interpretation of the Bible must necessarily be accompanied by specific skills."

"Sadly, the richness of Scripture is neglected or minimized by many because they were not afforded a solid grounding in this area," he said.

"Together with a greater emphasis on the study of Scripture in ecclesiastical programmes of training for priests and catechists, efforts should also be made to provide all the faithful with the resources needed to be able to open the sacred book and draw from it priceless fruits of wisdom, hope and life." Pope: Learn from St. Jerome “to live in contact and living dialogue" with Scripture

During his general audience this morning, the Holy Father spoke to the 40,000 pilgrims gathered in St. Peter’s Square about the necessity of living in personal dialogue with Scripture, a dialogue that “takes place in communion with the living Church.”Pope Benedict pointed the faithful to the example of St. Jerome as an inspiration to live in closer contact with the Word of God. Jerome's LifeSt. Jerome, who was born into a Christian family around the year 347, "placed the Bible at the center of his life: he translated it into Latin, commented on it in his writings and, above all, undertook to put it into concrete practice during his long earthly life."