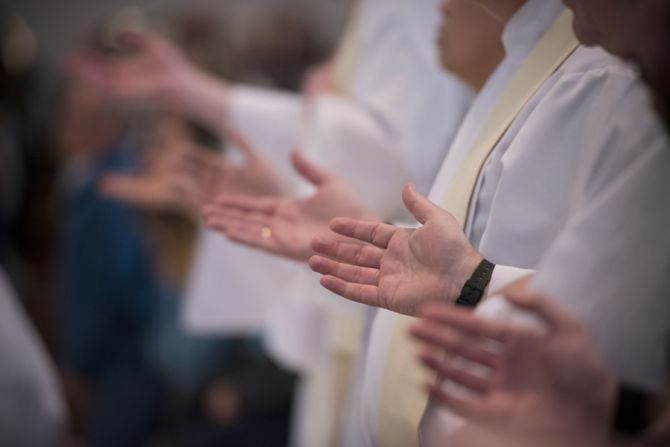 A survey of recently ordained Catholic priests reports that the great majority find satisfaction in their work celebrating sacraments and in their parish ministry, but there are also difficulties and areas for which they felt seminary life had left them unprepared.

A small minority of new priests voiced great dissatisfaction with their priestly life.

"We need to do a better job preparing our seminarians for living a life of celibacy as spiritual fathers, and... a much better job at helping them land successfully in their first year of priesthood and make the adjustments to a challenging environment," Father Thomas Berg, a moral theology professor and director of admissions at St. Joseph's Seminary and College in Yonkers, N.Y., told CNA.

"We also need to find the way to help them prepare better for real and practical challenges such as loneliness or the difficulties in maintaining friendships they began in seminary," said Berg, who served as a coordinator on the study's advisory board.

The Center for Applied Research in the Apostolate collaborated with the National Association of Catholic Theological Schools from April to July 2020 in the study, published in the report "Enter by the Narrow Gate: Satisfaction and Challenges Among Recently Ordained Priests".

Researchers sent a survey request to 1,379 priests recently ordained for both dioceses and religious orders. They received 1,012 valid responses, a 73% response rate. Respondents answered questions about areas of satisfaction or dissatisfaction with their priestly lives, discussed their seminary formation, and discussed difficulties of priestly life.

"By far, the areas they are most satisfied are related to their immediate ministries, including celebrating the sacraments in their parishes, serving the needs of their parishioners, teaching the faith to others, presiding at Masses and other liturgies, hearing Confessions, ministering to the youth, and providing pastoral counseling," the report summary said.

However, their self-reported areas of least satisfaction include "performing administrative and human resource duties, the poor relationship they have with the pastors under whom they serve, feeling burned out from their workload, their frustration with their diocese/bishop, and the lack of fraternity among their fellow priests."

Respondents' average year of ordination was 2017, and their average age was 38 years. About 76% were diocesan priests, with the remainder from religious institutes. While many were foreign-born, 82% were born in the U.S. The racial and ethnic breakdown of respondents was 74% white, 12% Hispanic or Latino, 8% Asian or Pacific Islander, and 4% African-American.

Berg found it "troubling" that so many reported struggles in their first years as priests. 13% of respondents said their lives as priests were "very dissatisfying."

"We need to dig further into the data, and get at those reasons, but I think this will be a wake up call for a lot of bishops," Berg told CNA. "It seems our newly ordained priests are landing in unexpectedly adverse environments in their respective dioceses. The report tells us in clear language that we need to do a much better job of accompanying and supporting our newly ordained priests in their first years of ministry."

While the study did not explicitly ask the priests about many personal problems, according to Berg a "low but consistent" percentage of recently ordained priests across dioceses experience a major crisis such as depression, alcohol dependency or other addiction, or entering a sexual relationship. Such a crisis might help lead them to abandon the priesthood.

"It was the desire to get at the causes of this phenomenon that occasioned the study," Berg told CNA.

The reports said that when new priests are asked their largest problems on a daily basis, they "express their greatest frustration with their diocese and fellow priests."

For 20% of respondents, differences among different age cohorts of priests are "very much" a problem, with another 26% indicating this was "somewhat" a problem. Another 20% named theological differences in the concept of the priesthood among fellow priests as a significant problem, with another 24% saying it was somewhat a problem. About 17% of respondents named feeling a lack of input into diocese-level decision-making processes to be a large problem.

A significant minority of respondents thought they had been assigned too many ministries and duties or were so busy they could not meet people's pastoral needs. Ministering at more than one parish was a problem for some. They said there was not as much fraternal support among priests as they would like, and the "loneliness of priestly life" was a problem. Some 30% of respondents thought that "unrealistic demands and expectations of lay people" were a problem, though about half as many said actual conflicts with parishioners or lay people were problematic.

Some 4% said living a life of celibacy or chastity was "very much" a problem, with about 14% saying this was "somewhat" a problem. About 2% said that "resolving any personal psycho-sexual issues" was very much a problem, and 9% said it was somewhat a problem.

Some 10% of respondents said that "differences among priests with different sexual orientations in your diocese" was very much a problem, while about 13% said this was somewhat a problem.

"Being expected to represent Church teachings you have difficulty with" was "very much" a problem for 2% or respondents, and "somewhat" a problem for about 5%.

About one percent said feeling comfortable ministering to women was very much a problem for them.

The survey asked the new priests to consider their own future in the priesthood. A large majority, 76%, said they will definitely not leave the priesthood, and 18% said they probably will not. However, 5% expressed uncertainty about whether they would continue to exercise their priesthood.

Asked if they have ever thought about leaving the priesthood, about 40% cited "celibacy and the loneliness of the priestly life" as a reason they have considered leaving.

"The next most frequently cited reasons are frustration with their diocese, religious institute, bishop or superior and the disappointment they feel in regards to their current ministries," the report said.

Some 79% know someone who left active ministry or the priesthood within five years of ordination. The respondents hypothesized that the reasons for this were "disillusionment with the actual life of ministry, loneliness, meeting someone they would like to be their romantic partner or to marry, and their desire to look for a romantic partner."

Among all survey respondents, the priests tended to report being very satisfied in the respect they receive as members of the clergy from lay persons, their present financial situation, and their present living situation. They were least likely to report satisfaction in balancing work, personal and spiritual lives and in their training for administrative matters such as budgeting and managing staff.

Berg noted to CNA that the responses were overwhelmingly from men of the millennial generation. He said that if it was challenging to be a new priest in the last decade, it is "even more challenging in a post-McCarrick Church."

"To be a priest in the coming decade I think will be to partake in a profound transformation of how the Church lives and experiences the faith: a Church with a smaller footprint as more and more parishes necessarily will have to be consolidated, merged or closed," he said. In his view, the Church will be forced to "find fresh new ways to engage in discipleship and thrive, mostly likely, as smaller but more intentionally Catholic communities."

"The priests of the next two decades will be part of this--major players. They will not tolerate a Church leadership focused simply on managing decline.," he said.

Berg encouraged prospective seminarians and priests to read the report and make their own conclusions.

"Lean into the hard work of vulnerability and transparency in formation. Be brutally honest with yourself about your past wounds, about those areas where you need to mature and grow," he said. "Take note of the many seminarians who reported how positively they benefited from counseling during formation."

Seminarians should ask themselves and bring to prayer and spiritual direction various important questions:

"What am I looking for in the priesthood? Is what I am looking for what the Holy Spirit wants me to desire? Am I looking for the esteem of others, for power, influence and admiration? Or am I sincerely hungry to be a spiritual father and to give myself in spousal love for the Church? What am I really looking for?"

"Seminarians have to get to the bottom of that with raw honesty," said Berg. "If you are looking for esteem, power, influence and admiration--pack and go home because you are not called to the priesthood."

Berg also had advice for all Catholics.

"Always pray for your priests," he said. "Be patient with your newly ordained priests. Simple things: be kind. But by the same token don't be afraid to give them clear feedback--while not forgetting to complement them for the positive."

"Remember -- and this is true of any priest--at any given moment priests are being pulled in a dozen directions at once," he said. "Keep that in mind. They have far many more things on their minds and hearts than may be apparent as you just chat together after Mass." Spirituality Year: How a break from academics helps prepare men for priesthood

When Fr. Josh Mayer entered St. John Vianney’s Seminary in Denver, his first year looked a little more monk-like than what some might expect. Cardinal Robert Sarah reflected on the Real Presence of Christ in the Eucharist and the meaning of the priesthood in a Mass in St. Peter’s Basilica Saturday marking his 50th ordination anniversary.