Pope Francis: 'Christmas is the feast of love incarnate' 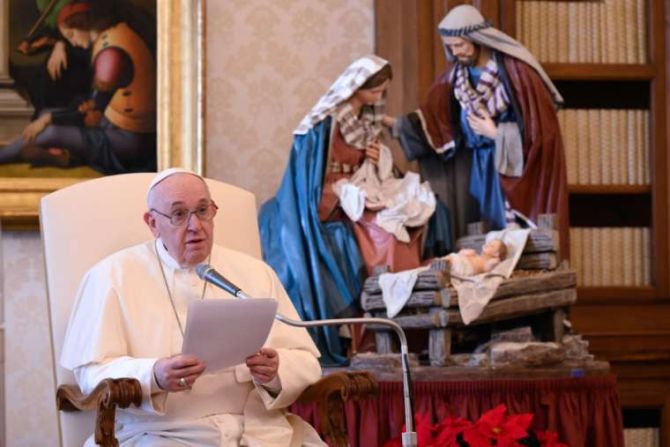 Pope Francis at his general audience address in the library of the Apostolic Palace Dec. 16, 2020. Credit: Vatican Media.

Pope Francis said Wednesday that Christmas brings joy and strength that can remove the pessimism that has spread in human hearts as a result of the coronavirus pandemic.

"Christmas is the feast of love incarnate and born for us in Jesus Christ. He is the light of mankind shining in the darkness, giving meaning to human existence and to the whole of history," Pope Francis said Dec. 23.

"Christmas invites us to reflect, on the one hand, on the drama of history, in which men and women, wounded by sin, ceaselessly search for truth, search for mercy and search for redemption; and, on the other hand, on the goodness of God, who has come towards us to communicate to us the truth that saves and to make us sharers in His friendship and His life," the pope said.

Speaking via livestream from the Vatican's Apostolic Palace due to the coronavirus pandemic, the pope said that he wanted to "offer some food for thought" as the world prepares for the celebration for Christmas.

Pope Francis invited people to spend some time in silence, contemplating Christ's birth, in front of a nativity scene. He added that his apostolic letter on nativity scenes can aid in this act of reflection.

"If the pandemic has forced us to be more distant, Jesus, in the crib, shows us the way of  tenderness to be close to each other, to be human," he said.

He said that the reality of Christ's incarnation -- that he became one of us -- can "give us much joy and courage."

"This gift of grace we receive through the simplicity and humanity of Christmas, can remove from our hearts and minds the pessimism, which has spread even more today due to the pandemic," he said.

"We can overcome that sense of disquieting bewilderment, not letting ourselves be  overwhelmed by defeats and failures, in the rediscovered awareness that that humble and poor Child,  hidden away and helpless, is God Himself, made man for us."

As Italy is set to enter into its second national lockdown of this year on Dec. 24, the Vatican has announced that the pope's traditional public greeting and prayers for the Christmas season will only be offered via livestream.

Pope Francis will give his "Urbi et Orbi" blessing on Christmas day from inside the Apostolic Palace. His scheduled Angelus addresses will likewise only be offered via livestream from inside the palace library through Jan. 6.

In his Wednesday general audience via livestream, the pope reiterated his message from last Sunday that the focus of Christmas should not be consumerism.

"Christmas must not be reduced to a sentimental or consumerist festival, full of gifts and good wishes but poor in Christian faith," he said.

"Therefore, it is necessary to curb a certain worldly mentality, incapable of grasping the incandescent core of our faith, which is this: 'And the Word became flesh and dwelt among us, full of grace and truth; we have beheld his glory, glory as of the only Son from the Father."'

Pope Francis said that the world at this time needs tenderness. He added that tenderness is one defining feature of humanity, noting that robots and artificial intelligence cannot express human tenderness.

He said that tenderness can be reborn in us by contemplating Christ's birth, and the "wonderful way in which God wanted to come into the world." 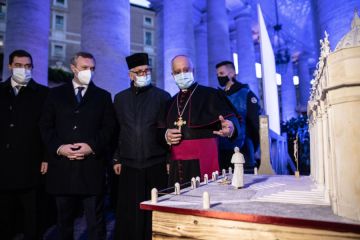 Among the novelties of this year’s “100 Nativity Scenes at the Vatican” exhibit is the inclusion of a miniature Pope Francis honoring the Christ Child.

Pope Francis advised Catholics Sunday not to waste time complaining about coronavirus restrictions, but to focus instead on helping those in need.