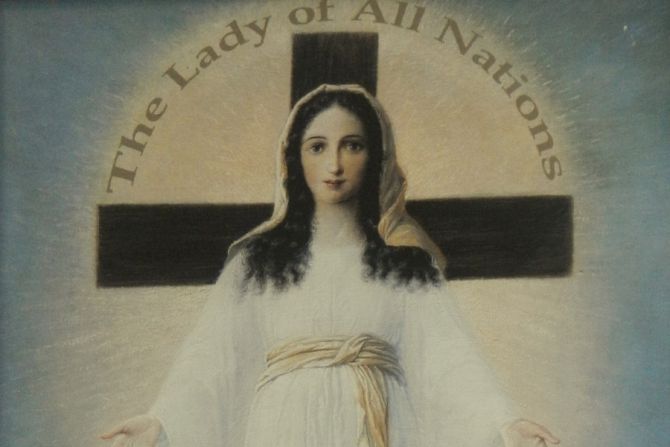 A detail from a painting depicting the Lady of All Nations. Credit: Judgefloro via Wikipedia (CC BY-SA 4.0).

The Vatican's doctrinal office has urged Catholics not to promote "the alleged apparitions and revelations" associated with the Marian title of "Lady of All Nations," according to a Dutch bishop.

The Congregation for the Doctrine of the Faith's appeal was announced in a clarification issued Dec. 30 by Bishop Johannes Hendriks of Haar­lem-Am­ster­dam.

The clarification relates to the alleged visions which Ida Peerdeman, a secretary living in the Dutch capital Amsterdam, claimed to have received between 1945 and 1959.

Hendriks, who as the local bishop is primarily responsible for evaluating the apparitions, said that he had decided to issue the statement after consulting with the Vatican's doctrinal congregation, which guides bishops in the discernment process.

The bishop said that the Vatican congregation regarded the title "Lady of All Nations" for Mary as "theologically acceptable."

"Nevertheless, the recognition of this title cannot be understood -- not even implicitly -- as the recognition of the supernaturality of some pheno­mena from which it seems to have come," he wrote in the clarification, published in five languages on the website of Haar­lem-Am­ster­dam diocese.

"In this sense, the Congregation for the Doctrine of the Faith reaffirms the validity of the negative judg­ment on the supernaturality of the alleged 'apparitions and revelations' to Ms. Ida Peerdeman approved by St. Paul VI on 04/05/1974 and published on 05/25/1974."

"This judg­ment implies that everybody is urged to cease any propagation concer­ning the alleged apparitions and revelations of the Lady of All Nations. Therefore, the use of the images and prayer cannot in any way be consi­dered a recognition -- not even implicitly -- of the supernaturality of the events in question."

Peerdeman was born on Aug. 13, 1905, in Alkmaar, in the Netherlands. She claimed that on March 25, 1945, she saw her first apparition of a woman bathed in light who referred to herself as "the Lady" and "Mother."

In 1951, the woman reputedly told Peerdeman that she wished to be known as "the Lady of All Nations." That year, the artist Heinrich Repke created a painting of "the Lady," depicting her standing on top of a globe in front of a cross.

In 1956, Bishop Johannes Huibers of Haarlem declared that after an investigation he had "found no evidence of the supernatural nature of the apparitions."

The Holy Office, the forerunner of the CDF, approved the bishop's verdict a year later. The CDF confirmed the judgment in 1972 and 1974.

In his clarification, Bishop Hendriks acknowledged that "Through devotion to Mary, the Mother of All Nations, many faithful express their desire and their effort for the universal fraternity of man­kind with the help and support of Mary's intercession."

He quoted from Pope Francis' encyclical, "Fratelli tutti," published Oct. 3, in which the pope wrote that "For many Christians, this journey of fraternity also has a Mother, whose name is Mary. Having received this universal motherhood at the foot of the cross, she cares not only for Jesus but also for 'the rest of her children.' In the power of the risen Lord, she wants to give birth to a new world, where all of us are brothers and sisters, where there is room for all those whom our societies discard, where justice and peace are resplen­dent."

Hendriks said: "In this sense, the use of the title Lady of All Nations for Mary is in itself theologically acceptable. Prayer with Mary and through the intercession of Mary, Mother of our peoples, serves the growth of a more united world, in which everyone recognizes themselves as brothers and sisters, all created in the image of God, our common Father."

Concluding his clarification, the bishop wrote: "Regar­ding the mere title 'Lady,' 'Madonna,' or 'Mother of All Nations,' the Congregation generally is not opposed to its use, provided that this is clearly separated from the recognition of the alleged apparitions."

"If the Virgin Mary is invoked under this title, pastors and faithful must ensure that all forms of this devotion refrain from any reference, even implicit, to alleged apparitions or revelations."

Alongside the clarification, the bishop issued an explanation, also dated Dec. 30 and published in five languages.

In it, he wrote: "Devotion to Mary as the Lady and Mother of All Nations is good and valuable; it must, however, remain separate from the messages and the apparitions. These are not approved by the Congregation for the Doctrine of the Faith. That is the core of the clarification which has come about in accordance with the Congregation follo­wing the recent appearance of various national and inter­na­tio­nal reports concer­ning the veneration."

The bishop said that he had issued the clarification as a result of conversations with CDF officials following the media reports and inquiries.

He recalled that the CDF had expressed concern in 2005 about the wording of an official prayer invoking the Blessed Virgin as Lady of All Nations "who was once Mary," advising Catholics not to use the phrase.

Hendriks said: "It is permitted to use the image and the prayer -- always in the way the Congregation for the Doctrine of the Faith approved in 2005. Days of Prayer in honor of the Lady of All Nations are also allowed; however, reference may not be made to the apparitions and messages which are not approved."

"Anything that might be understood as (implicit) recognition of the messages and apparitions has to be avoided because the Congregation passed a negative judg­ment about these which was confirmed by Pope Paul VI."

Hendriks noted that Bishop Hendrik Bomers, bishop of Haarlem from 1983 to 1998, authorized the devotion in 1996, although he did not pronounce on the validity of the apparitions.

He also acknowledged that Bishop Jozef Punt, bishop of Haarlem from 2001 to 2020, announced in 2002 that he believed that the apparitions to be authentic.

Hendriks said that Paul VI's negative verdict would therefore "be new for many people."

"In 2002, namely, when Bishop Punt took a position on the authenticity of the apparitions, only a clarification from the year 1974 was known," he said.

"In the 1980s, my predecessor believed that it might be possible to authorize this devotion, and Bishop Bomers finally decided for that in 1996."

Devotion to the Lady of All Nations is centered on a chapel in Amsterdam and promoted by the website theladyofallnations.info.

In his explanation of the CDF's observations, Hendriks wrote: "For everyone who feels united in devotion to the Lady of All Nations is the good news in this clarification approved by the Congregation for the Doctrine of the Faith that devotion to Mary under this title is permitted and words of appreciation are dedicated to it."

"For many faithful, however, it will be especially painful that the Congregation for the Doctrine of the Faith and Pope Paul VI expressed a negative judgment about the apparitions. I want to say to all of them that I can understand their disappoint­ment."

"The apparitions and the messages have inspired many people. I hope that it is a consolation to them that devotion to Mary under the title 'Lady of All Nations' remains in place, whether in the chapel in Am­ster­dam or at the Days of Prayer, at which in the past I myself was present several times."