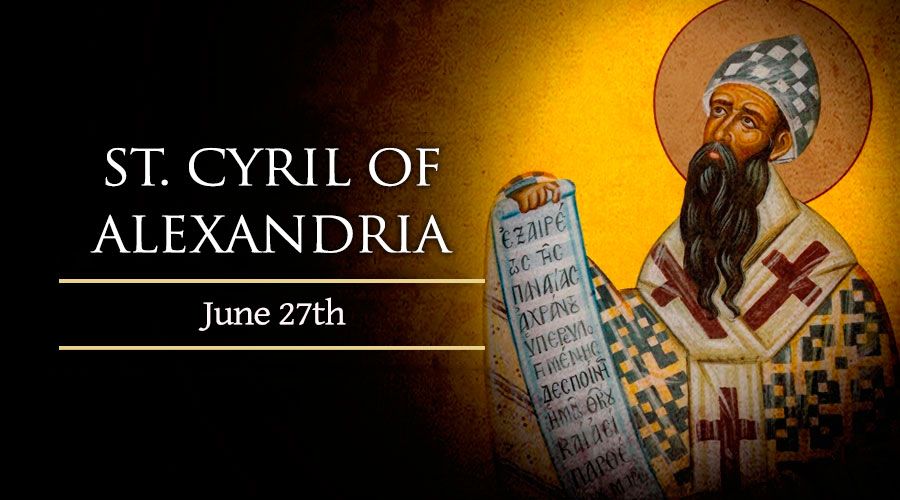 Cyril was most likely born in Alexandria, the metropolis of ancient Egypt, between 370 and 380. From his writings, it appears he received a solid literary and theological education. Along with his uncle, Patriarch Theophilus of Alexandria, he played a role in an early fifth-century dispute between the Egyptian and Greek churches. There is evidence he may have been a monk before becoming a bishop.

When Theophilus died in 412, Cyril was chosen to succeed him at the head of the Egyptian Church. He continued his uncle's policy of insisting on Alexandria's preeminence within the Church over Constantinople, despite the political prominence of the imperial capital. The two Eastern churches eventually re-established communion in approximately 418.

Ten years later, however, a theological dispute caused a new break between Alexandria and Constantinople. Cyril's reputation as a theologian, and later Doctor of the Church, arose from his defense of Catholic orthodoxy during this time.

During the fourth century, the Greek Church had already held two ecumenical councils to confirm Christ's eternal preexistence as God prior to his incarnation as a man. From this perennial belief, it followed logically that Mary was the mother of God. Veneration of Mary as “Theotokos” confirmed the doctrine of the incarnation, and Christ's status as equal to the God the Father.

Nestorius insisted that he, too, held these doctrines. But to Cyril, and many others, his refusal to acknowledge Mary as the Mother of God seemed to reveal a heretical view of Christ which would split him into two united but distinct persons: one fully human and born of Mary, the other fully divine and not subject to birth or death.

Cyril responded to this heretical tendency first through a series of letters to Nestorius (which are still in existence and studied today), then through an appeal to the Pope, and finally through the summoning of an ecumenical council in 431. Cyril presided over this council, stating that he was “filling the place of the most holy and blessed Archbishop of the Roman Church,” Pope Celestine, who had authorized it.

The council was a tumultuous affair. Patriarch John of Antioch, a friend of Nestorius, came to the city and convened a rival council which sought to condemn and depose Cyril. Tension between the advocates of Cyril and Nestorius erupted into physical violence at times, and both parties sought to convince the emperor in Constantinople to back their position.

During the council, which ran from June 22 to July 31 of the year 431, Cyril brilliantly defended the orthodox belief in Christ as a single eternally divine person who also became incarnate as a man. The council condemned Nestorius, who was deposed as patriarch and later suffered exile. Cyril, however, reconciled with John and many of the other Antiochian theologians who once supported Nestorius.

St. Cyril of Alexandria died on June 27, 444, having been a bishop for nearly 32 years. Long celebrated as a saint, particularly in the Eastern Catholic and Eastern Orthodox churches, he was declared a Doctor of the Church in 1883.