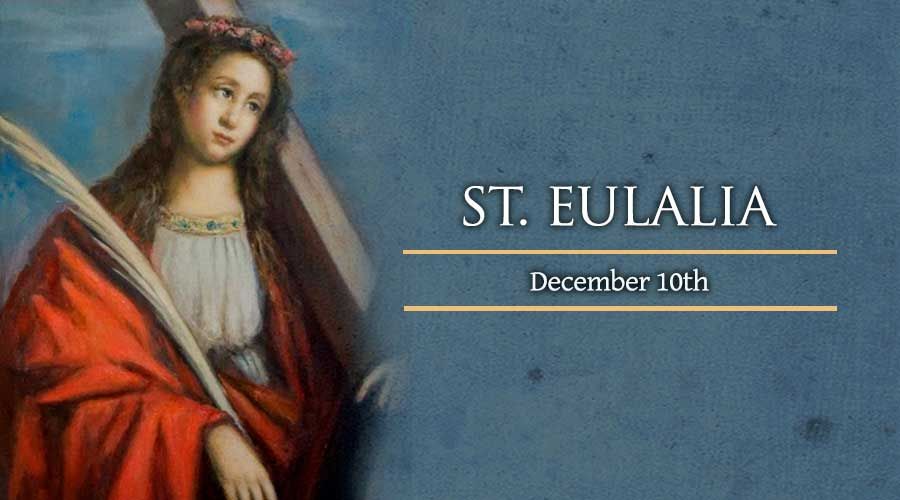 St. Eulalia descended from one of the most prominent families in Spain in 290 AD. She was educated in the Christian religion and was taught the sentiments of perfect piety. From her infancy she distinguished herself by an admirable sweetness of temper, modesty and devotion.

She showed a great love of the holy state of virginity, and by her seriousness and her contempt of dress, ornaments diversions and worldly company, she gave early signs of her sincere desire to lead a heavenly life on earth. Her heart was raised above the world before she was thought capable of knowing it, so that its amusements, which usually fill the minds of youth, had no charms for her, and every day of her life she continued to grow in virtue.

Legends say that she was just twelve years old when the bloody edicts of the Emporer Diocletian were issued in 304, by which it was ordered that all persons, without exception of age, sex, or profession, should be compelled to offer sacrifice to the gods of the empire.

Eulalia, although young, took the publication of this order as a sign of battle, but her mother, observing her impatient ardor for martyrdom, carried her into the country. However, the young saint quickly found a means to make her escape by night, and after much fatigue, arrived at Merida before daybreak.

That same morning, as soon as the court convened, she presented herself before the cruel judge, whose name was Dacian, and reproached him with impiety in attempting to destroy souls by compelling them to renounce the only true God.

The governor then commanded her to be seized. First, employing caresses, Dacian presented to her the advantages which her birth, youth and fortune gave her in the world, and the grief which her disobedience would bring to her parents. Seeing that these temptations had no effect, he began to threaten her, placing the most cruel instruments of torture before her eyes, saying to her, "All this you shall escape if you will but touch a little salt and frankincense with the tip of your finger."

Provoked at these seducing flatteries, she threw down the idol, trampled upon the cake which was laid for the sacrifice and spat at the judge -- an action only to be excused by her youth and inattention under the influence of a warm zeal, and fear of the snares which were laid before her.

Upon the judge's order, two executioners began to tear her tender sides with iron hooks, so as to leave the very bones bare. While this was happening, she called the strokes the trophies of Christ. Next, lighted torches were applied to her breasts and sides: under which torment, instead of groans, nothing was heard from her mouth but thanksgivings. The fire at length catching her hair, surrounded her head and face, and the saint was stifled by the smoke and flame.

History says that a white dove seemed to come out of her mouth, and to wing its way upward when the holy martyr expired: at which prodigy the executioners were so much terrified that they fled and left the body.

Her relics are kept with great veneration at Oviedo, where she is honored as patroness. The Roman Martyrology mentions her name on December 10.

Vatican official to international donors: Give Lebanon a chance for a ‘better future’